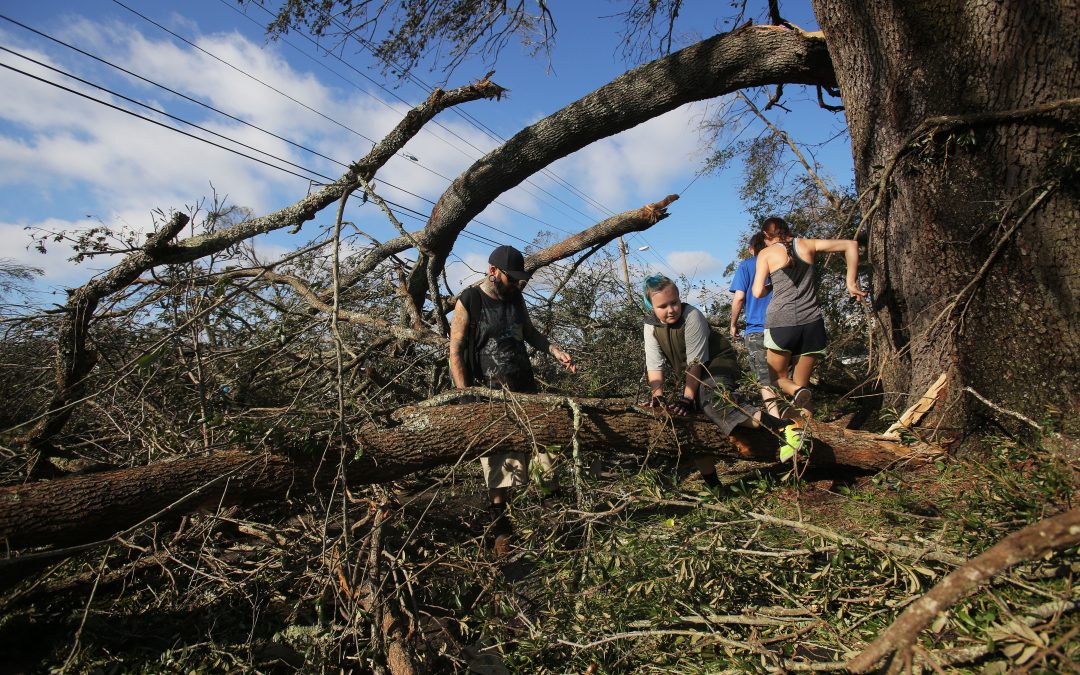 By Tom Tracy | Catholic News Service
SOUTH MIAMI, Fla. (CNS) — Moved by their own good fortune at dodging recent hurricanes, a Miami community expressed their gratitude by sending a convoy of volunteers and donations to Hurricane Michael’s ground zero in the state’s panhandle region in time for Thanksgiving.

After seeing a memo calling for a second parish collection for the people of northwest Florida following Hurricane Michael, Father Alejandro Rodriguez Artola in Miami took note that the region was most in need of volunteer manpower, especially at key sites around Panama City — where the hurricane’s Oct. 10 landfall brought near Category-5 strength winds and destruction.

“They were saying that they needed people, at least 75 volunteers a day to work at the distribution center,” said Father Rodriguez, pastor of St. Thomas the Apostle Parish in South Miami, who earlier in November began preparing a cross section of parish resources, parish and school staff and youth ministries to mobilize some eight vehicles and three trucks which traveled to St. Dominic Church in Panama City Nov. 10 and 11.

The heavily-damaged St. Dominic is now a kind of tent city offering daily drive-up assistance and emergency supplies for local residents, along with a revised schedule of outdoors sacraments and spiritual resources for a region still without electricity, clean water and a sense of normalcy.

By the time the Miami group departed, they had the makings of complete mission trip, stopping at a national park along the way during their nine-hour drive north for an outdoor Mass and rosary as they made their way to the Florida Panhandle.

Among the 30 persons in the caravan were parish staff, families, a local chef, graduates of St. Thomas the Apostle Elementary School and one seminarian for the Miami Archdiocese.

In the panhandle, they were offered lodging from a seaside Christian retreat center hosting hurricane volunteers and local displaced families.

“It caught us off guard that the extent damage is way beyond what you can read about,” said Catalina Pittier of Miami, who joined the caravan along her husband and two school-age daughters, all of whom assisted in producing and distributing care packages in the drive-through distribution project at St. Dominic.

“The line of cars would not stop, we could not take a break,” Pittier told the Florida Catholic, Miami’s archdiocesan newspaper. “At some point the line was so long that they opened a second line. You would think one month after the hurricane the work would be done, but there are hundreds of commercial buildings down and that represents people who are unemployed.”

“Miami is a wealthier city and could recover easier, but here there is not that amount of people and resources; the need here will continue, and they will need people,” she said.

Clarissa Pittier, her 17-year-old daughter and a student at St. Brendan High School and alumnus of St. Thomas the Apostle Elementary School, noted that the Miami group took time to see a Catholic elementary and middle school that has been closed and with students relocated as a result of Hurricane Michael.

St. John Catholic School in Panama City suffered catastrophic wind and rain damage and is hosting classes at nearby St. Bernadette Parish for the foreseeable future. The Miami students had sent emergency school supplies along with other donations.

“I can’t imagine what those poor kids had to go through,” Clarissa said. “I know if I saw my own campus like that I would be absolutely devastated.”

The high schooler also offered on-site Spanish-to-English translations in the drive-through distribution last weekend at St. Dominic, where she took time to collect her own photos and video content that she will likely use in a future PowerPoint presentation for a community service learning project at her high school.

“From time to time I was able to work with the people driving up in their cars, especially if they needed help to translate,” she said. “You could see the need in their eyes, and I always offered a smile, because you never know how much a smile can help in that situation.

“I offer a big huge hug to all those people out there who were affected by this hurricane and hope they know that this St. Thomas community is sending all our love and prayers for them,” Clarissa said, noting her younger sister Ana had similar experiences.

Gabe Tischler, who is working full time on the Hurricane Michael response for the Tallahassee-based Florida Catholic Conference following the storm, noted that Catholic Charities entities in the region have distributed some $6 million in aid, services and donations since the storm, and that St. Dominic continues to serve some 2,500 families daily. It is expected that the project may continue unabated well into next year.

“This past week we transported 60 families out of hurricane shelters to various new locations; most of the families in the shelter simply have no place to live and their homes were destroyed whether as owners or renters,” Tischler told the Florida Catholic.

Renovations, he added, also are being made to a women’s shelter in Pensacola and Catholic Charities of Northwest Florida is transitioning Panama City-area staff into a new location so that they will not have to continue working outdoors.

“They are also preparing rooms for staff that have lost their homes here, that kind of tells you how things are,” Tischler said, noting that “one of our biggest needs right now is tree removal, because this was a wind event and there is still a large percentage of the impacted population still have trees on their roofs. That is one of the things I am working on: to try to get some partner volunteer agencies to do tree removal projects.”
As for the Miami delegation of volunteers, Father Rodriguez credited the Holy Spirit for clearing so many obstacles to make the relief mission from Miami a smooth operation. The group concluded their day of volunteering, he said, with a Saturday vigil Mass at sunset on Panama City Beach.

“It was worthwhile in both directions, not just what we were able to offer, but to give our parishioners an opportunity to get a little uncomfortable, to get out of their comfort zone and take a weekend off for this,” the priest said. “You go on a mission thinking you will help someone else but then it’s the grace of God that is given to a missionary.

“It was a solid weekend, very abundant: the joy, the pain unfortunately, the grace, the quality of everything, being out in nature and the splendor of God’s glory. We met people from literally all of the country, some of them staying for a week or three weeks at a time.”