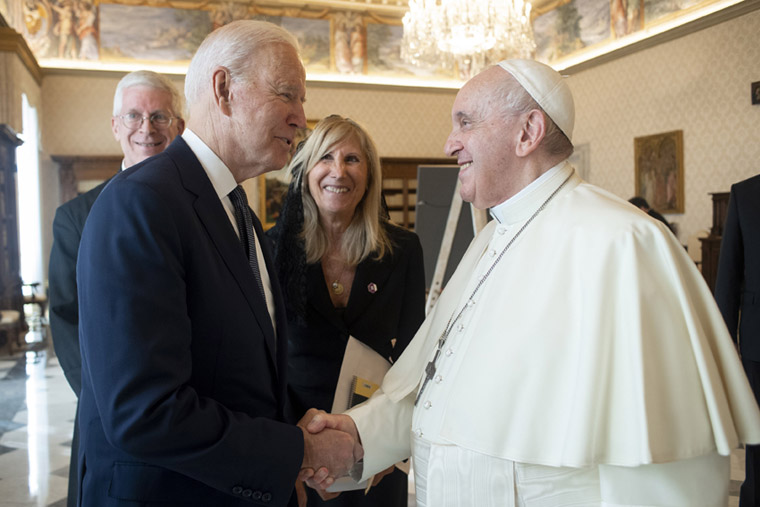 ROME — Pope Francis “is a man who has a great empathy. He’s a man who understands that part of his Christianity is to reach out and forgive,” U.S. President Joe Biden told reporters in Rome Oct. 31.

On the margins of the G-20 summit in Rome, Biden repeatedly was asked about his faith and his meeting with Pope Francis.

Skipping a cultural event planned for the heads of state Oct. 30, Biden went to the vigil Mass at St. Patrick’s Church, official home of the U.S. Catholic community in Rome. A reporter for the Associated Press, who was at the church for the Mass, said the president received Communion.

In a post on the parish Facebook page later, Father Petroff said the three priests “were honored to welcome the president and first lady on behalf of St. Patrick’s Catholic American community in Rome and the Paulist Fathers. All are welcome!”

Before leaving Rome, Biden also went to Mass Nov. 1 in the residence of the U.S. ambassador to Italy. Jesuit Father David McCallum, the Rome-based executive director of the Jesuits’ Discerning Leadership Program, said he celebrated the early morning Mass for the Solemnity of All Saints. He also posted photos on his Facebook page.

(In January 2020, Father McCallum was missioned to oversee development and coordination of the Discerning Leadership Program, while continuing to serve as vice president for mission integration at Le Moyne College, a position he has held since 2016. He will continue to serve Le Moyne as special assistant to the president for international projects related to restorative justice between the Church and indigenous  peoples, and Ignatian leadership formation for ministry and Jesuit education. The Discerning Leadership Program is a collaboration between Le Moyne College, the General Curia of the Society of Jesus, the Pontifical Gregorian University in Rome; the business school ESADE in Spain and Georgetown University.)

Some Catholics, including a few U.S. bishops, have argued that Biden, who regularly attends Mass, should not receive Communion because of his support for legalized abortion, which clearly runs counter to Catholic Church teaching on the sacredness of human life from conception to natural death.

Several hours after meeting Pope Francis Oct. 29, Biden was asked if abortion was one of the topics of his meeting with the pope. Biden responded, “We just talked about the fact he was happy that I was a good Catholic, and I should keep receiving Communion.”

The Vatican did not comment on what Biden reported other than to say it was a “private” conversation.

The last question at Biden’s Oct. 31 news conference at the end of the G-20 summit was whether what he said Pope Francis had said should put “to rest” the discussion about his worthiness to receive the Eucharist.

Biden responded, “Look, a lot of this is just personal.”

Rather than addressing the Communion question directly, the president spoke of his admiration for Pope Francis and, particularly, for how the pope “provided great solace” for him and his family when Biden’s son, Beau Biden, died of cancer in 2015.

“There has always been this debate in the Catholic Church, going back to Pope John XXIII, that talks about how we reach out and embrace people with differences,” Biden said. “If you notice what the pope said when he was asked, when he first got elected pope, he was traveling with the press and they said, ‘What’s your position on homosexuality?’ He said, ‘Who am I to judge?’”

This is a man who has a great empathy. He’s a man who understands that part of his Christianity is to reach out and forgive,” Biden said. “And so, I just find my relationship with him one that I personally take great solace in; he is a really, truly genuine, decent man.”

The president said that when he won the election in 2020, Pope Francis phoned him “to tell me how much he appreciated the fact that I would focus on the poor and focus on the needs of people who are in trouble.”

While saying he did not talk much more about his conversation with the pope “because so much of this is personal,” Biden said Pope Francis embodies “everything I learned about Catholicism from the time I was a kid going through grade school, through high school. And I have great respect for people who have other religious views, but he’s just a fine, decent, honorable man, and we keep in touch.”