Big plans for tiny homes for homeless in the works 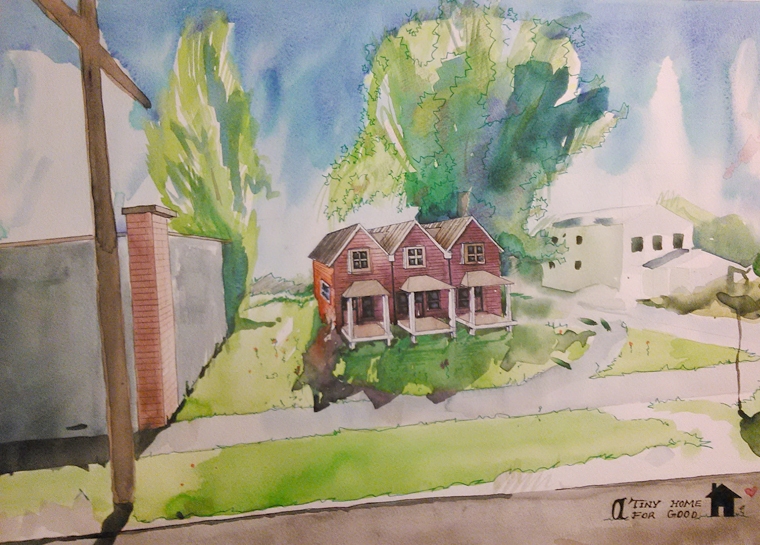 Things may be looking up for the homeless in Syracuse. Andrew Lunetta, executive director of A Tiny Home for Good, Inc. in Syracuse, has launched a new project that offers a housing model for those facing chronic homelessness.

“My six years of work with the homeless showed me that there is a need for affordable and dignified housing,” said Lunetta. “They [people who are homeless] live in deplorable conditions. I want to offer housing to individuals so they’ll have a warm place to sleep, a place to get on their feet.”

Lunetta’s A Tiny Home for Good project will construct and maintain tiny one-bedroom homes measuring between 150 and 200 square feet and equipped with all the amenities of a regular house. Under the plan, three homes would be built on a vacant city lot.

According to Lunetta, each home will be offered to one individual who is facing chronic homelessness, one who relies on the earnings from day-to-day labor or temporary assistance. The rent payment will be determined on a sliding scale that is dependent on the resident’s income. Each resident will be connected with a professional care manager through a partnership with one of the Syracuse area’s care management organizations.

Lunetta has followed the innovative Tiny Home concept over the last two or three years. “I thought it would be nice to live in one,” commented Lunetta. An advocate of simple living, he believes “it’ll be the future as our resources become scarce.”

Lunetta said that there are well over 100 people who live on the streets and in shelters in Syracuse.

According to data from the National Alliance to End Homelessness, in January 2014, 578,424 people experienced homelessness on any given night in the U.S.; about 15 percent of the homeless population — 84,291— are considered chronically homeless individuals, and about nine percent of people who are homeless — 49,933 — are veterans.

The report also showed that even though those facing chronic homelessness only make up 10 percent of the homeless population, they place a significant burden on already taxed public services.

Lunetta has long worked to help the homeless. A few years ago, he spearheaded the Brady Faith Center’s Pedal to Possibilities Program, designed to provide people who are homeless, many of them depending on the Rescue Mission and the Catholic Charities Men’s Shelter for their refuge, with exercise, incentive and fellowship.

Later, he leased and shared a large house, the Possibilities Home, with five homeless men who had graduated from the biking program. Two of the men are now living in their own homes.

After graduating from Le Moyne College in 2012, Lunetta went on to earn a master’s degree in public administration from Maxwell School of Syracuse University in 2014. “In January 2014, my last semester, I knew I wanted to pursue funding for the [Tiny Home] project,” recalled Lunetta. “I made connections at Maxwell and they’ve been really helpful.” During his fellowship in his last year at Maxwell, Lunetta worked with such organizations as the John Ben Snow Foundation and the Central New York Community Foundation, which Lunetta said is “the largest grant-making organization in central New York.”

“It was an incredibly good learning experience for me,” remarked Lunetta. “I know that it will be really helpful as I go forward.”

Up until November, Lunetta and Tiny Home’s board of directors did some fundraising for the project. “We went to friends, family and people who care about the homeless,” said Lunetta.

On Nov. 28, the organization was awarded tax-exempt status. “Now we can go to organizations like the Central New York Foundation to submit applications for funding,” stated Lunetta.

“We’ve been going out in full force,” commented Lunetta about his quest to find land that is suitable. “I want to find a quiet neighborhood, one with lots of sunshine in a pretty locale — one I would personally live in.”

Lunetta’s plan to offer a safe haven to homeless people hit a snag, however, in late November. When he attempted to purchase a piece of land, the deal fell through. “The neighborhood didn’t want it,” explained Lunetta. “I was discouraged that the three men who had been selected to live in the first houses wouldn’t be able to move in right away.”

Nevertheless, Lunetta continued to pursue his dream. “After talking to the [Greater Syracuse] Land Bank, they encouraged me to find a way to put a personal face on homelessness,” he said. “I’ve gone door-to-door and to community meetings about it. We want people to see the face of homelessness. They [people] want to get rid of it but they don’t want to take the tangible steps to end it.”

Lunetta said the Tiny Home for Good project, with its placement of three homes to a lot, enables people who are homeless to be integrated into the community. “People will see that the labels that are put on the homeless are not warranted,” he added. “It will show the community that those facing homelessness have a lot to contribute to the community.”

Lunetta feels strongly about forging ahead with the project. “I care about this community, and the connections I have made have allowed me to make some positive changes,” he said.