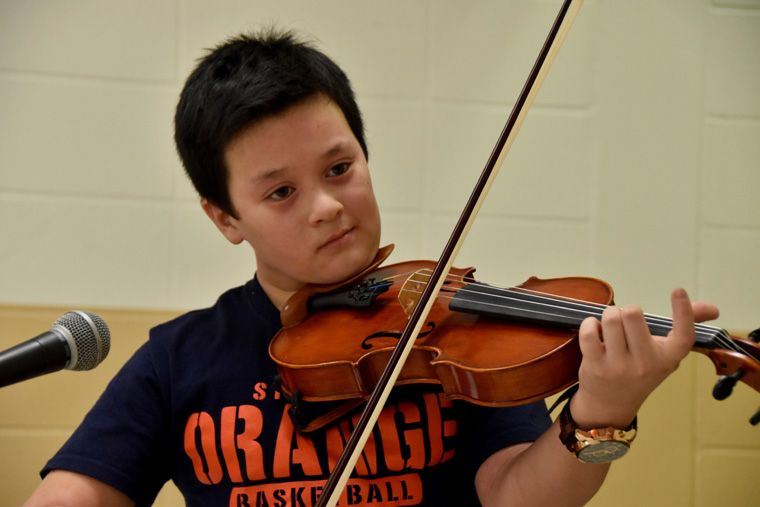 “This is helpful,” said Dr. Maria Iannolo, a member of the scholarship committee, “because these families may not have been able to choose a Catholic education for the child.”

A recent spaghetti supper raised about $2,000 for the Eagles Fund and more donations are sought, because a Catholic education at Blessed Sacrament sticks in the mind — for decades.

For example, the staff and students have always known how to close the school day in a prayerful or musical way.

“That was a big deal, getting out of school at the end of the day,” recalled J. Ronald Fox, Ph.D., a member of Blessed Sacrament’s Class of 1943.

The Cazenovia resident said the school day started 8:30 a.m. At 3:30 p.m., students lined up in the hallway, and two young women would start playing a “very stimulating march duet” — the same march every day, Entry of the Gladiators — on the piano inside the front door.

Fox was in the rotation of boys who accompanied the pianists on the snare drum, forming what he called a lasting memory:

“Kind of a fun thing to do and you could see all of the students parade out of the school” to the sidewalk, where there were student crossing guards, with their white strapping across their shoulder and around their waist, to help students cross James Street.

Tale of a hard worker

“At Blessed Sacrament,” Fox said, “they taught me to work hard.”

That ethic continued at St. John the Evangelist High School, Le Moyne College (bachelor of science degree in physics, with honors), and Harvard University (M.B.A. in marketing and Ph.D. in experimental psychology).

“I think it takes a while for young people to learn how to get the most out of schools,” Fox said, “and I think that takes some special teachers to teach that; and I was fortunate to have some of those teachers at Blessed Sacrament and certainly at St. John the Evangelist High School and at Le Moyne.

“It’s interesting how much of this is just the accident of being at places where you happen to intersect with some very talented teachers that you learn from.”

The Eagles Fund was established in 2017; “it sounded good to me,” Fox said.

So every year now, Dr. Iannolo said, the Eagles Fund gives out $500 of the endowed scholarship that Fox donated in memory of his parents, John C. Fox and C. Frances Fox. “My parents felt very positively toward Blessed Sacrament,” he said.

From the overall Eagles Fund, Dr. Iannolo said, about 45 pupils in kindergarten through sixth grade receive scholarships of about $1,000. Enrollment this school year is 226 in three-year-old pre-K through sixth grade, and tuition for K-6 is $5,000.

“I think Catholic schools have magic, I’ve always thought that,” said Mary Vecellio, the valedictorian of Blessed Sacrament School in 1969. She was already a piano player and a singer in the eighth grade.

Vecellio, of East Syracuse, recalled that her teachers were a mix of laity and religious who lived by the Catholic tradition of being kind to others.

Her graduating class had 98 kids and two teachers — each with 49 students. “Our teachers managed to keep order in that room and teach us well,” she said. They inspired her to go into teaching herself.

A graduate of Bishop Grimes Jr./Sr. High School, she has a degree in music education from Nazareth College and a master’s in applied music (piano performance) from Syracuse University.

These days she gives private lessons in piano, voice, and theory, and she does a lot of piano accompaniment. A soprano, she subs as a cantor and also as an organist at Blessed Sacrament Church.

The Eagles Fund, she said, is a wonderful thing because children are never too young to be brought up in faith, always loving and caring.

Dr. Iannolo said a sixth-grader wrote a letter to the Eagles Fund saying, “Thank you for allowing me to stay at this amazing school.”

Kevin Kuehner, who is part of the group that started the Eagles Fund, has three children at Blessed Sacrament — kindergartner, fourth-grader, and sixth-grader.

“We were thinking about the core challenges in Catholic education,” he said. “Money is always an issue.”

A plea to pitch in

His group had been fundraising among themselves, he said, but they decided to focus on the greater community and on alumni.

“We’ve had alumni-relation dinners,” Kuehner said. “We’re working very hard at creating our database of all of our graduates, and trying to re-engage the people who haven’t been around in a long time.”

At one Eagles Fund event, Dr. Iannolo’s father spoke of his time at St. Vincent’s School and then Christian Brothers Academy.

“He told all of us how he would not have been able to have an education, let alone a Catholic education, if it were not for the generosity of other people in his life giving him a scholarship,” Dr. Iannolo said. “Some of those people were at St. Peter’s Church.”

Her father also pointed out, she said, “that it is very important for children to grow up learning to respect God, because if they don’t respect God, they are not going to have the same tendency to respect other people as well.”

At Blessed Sacrament School, the children pray every morning and every day when the bell rings, she said.

The school day runs from 8 a.m. to 2:15 p.m. and the pupils nowadays eat lunch in school. Friday “dance jams” begin at 2:10 p.m. as the pupils dance their way into the weekend, Principal Lisa Coppola said.

She said the Eagles Fund allows families to “have the child grow and learn spiritually, academically, emotionally. … People should contribute because we value Catholic-school education. It is important for families and individuals in our community.”

Blessed Sacrament School children, Principal Coppola said, “will know their calling because of the base and the education and the spirituality they received from the school.”

Lorelei Craner, a third-grader at Blessed Sacrament, said, “I love going to the school. I love it because all of the teachers are kind and they help you every step of the way.”

Her mom, Sandy Craner, is the treasurer and past president of the PTA.

Looking back at his education at Blessed Sacrament, Lorelei’s brother Zander, an eighth-grader at Bishop Ludden Jr./Sr. High School, said, “It makes me want to keep going. Really push myself.” He is in the STEM (science, technology, engineering, and mathematics) program and also on the stage crew at Ludden.

“I’m very blessed to have this place in my life,” said Mike Finn, who coaches basketball at Blessed Sacrament and works three jobs to have his kids in Catholic school.

His daughter, Sofia, is an eighth-grader at CBA and his son, Jackson, is a fourth-grader at Blessed Sacrament, where both of them started in kindergarten.

Sofia won a kindness award, and she got up and gave a speech about Blessed Sacrament, Mike said.

Sofia and Jackson both love the theater. One time their father was struggling carrying microphones in for the school play, and Blessed Sacrament pupils immediately went to his aid.

When Jackson played a rock in a show at the civic center, Mike told him: “‘You will play that rock like no one has ever played a rock before.’” Mike laughed and added: “He did, he became a funny rock.”

Theater and music skills are both promoted at Blessed Sacrament. At the Jan. 25 Eagles Fund dinner, CBA seventh-grader Dempsey Horan played the violin. When an attendee verbally gave him the first 12 notes of a favorite classical-music piece, Dempsey duplicated it admirably on the violin.

He had attended Blessed Sacrament in kindergarten through sixth grade. He has played piano since he was three years old, and he picked up the violin last year. At CBA he plays in the string orchestra and he also plays percussion in the school band.

Blessed Sacrament “just felt like a community,” he said. “Everyone is so nice to me, so welcoming. Every time I play people think it is such a big deal …, but you can just do anything that your heart desires.”