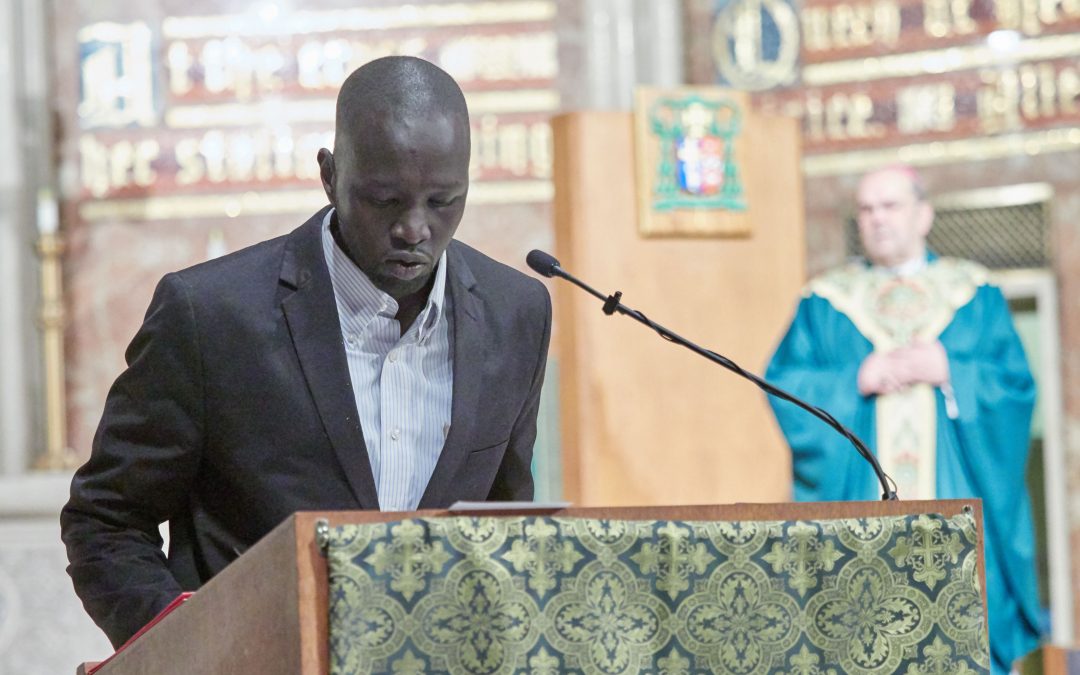 Bishop Robert J. Cunningham called on the faithful to support refugees in prayer and action during a Mass in Solidarity with Refugees and Exiles celebrated at the Cathedral of the Immaculate Conception Feb. 5.

“As people of faith, we cannot tolerate racial and religious injustice,” he said in his homily. “We cannot hide our faith under a bushel basket. Our words and deeds must bring the light of our faith to the current situation of refugees and exiles. We need to support them with our prayers and raise our voices against unjust practices directed at them.”

In a statement released Jan. 31, Bishop Cunningham said, “The executive order creating a 120-day ban on refugees’ admission into the United States has shaken America to its very core,” and invited the community to join him for the special Mass. President Donald Trump’s Jan. 27 executive memorandum “The Protection of the Nation From Foreign Terrorist Entry Into the United States” suspends the entire U.S. refugee resettlement program for 120 days and bans entry of all citizens from seven majority-Muslim countries — Syria, Iraq, Iran, Sudan, Libya, Yemen, and Somalia — for 90 days, according to Catholic News Service. A Seattle judge’s Feb. 3 ruling put a temporary hold on the ban nationwide, according to the Associated Press.

The pews were full for the Sunday morning celebration, drawing members of local refugee communities — several of whom offered readings, petitions, the gifts, and song during the Mass — regular Cathedral parishioners, and faithful from around the area.

Bishop Cunningham began his homily with words of welcome to “those from other lands who join us today. You, and so many others who live in our area and throughout our diocese, enrich this local Church, our community, and our nation. Thank you for being with us today,” he said, drawing applause from the congregation.

Reflecting on the first reading from Isaiah, Bishop Cunningham noted that, “Isaiah offers the chosen people words of encouragement. If they hasten to take his advice to feed the hungry, clothe the naked, and shelter the oppressed, their light will break forth like the dawn and their wounds will be healed. Isaiah connects the people’s actions on behalf of the oppressed and the afflicted with Israel’s future well-being. Their glorious time begins when they care for those in need.”

He also drew on the Gospel of Matthew, where Jesus states that, “Whatever you did for one of these least brothers and sisters of mine you did it for me.” “Seeing the face of Christ in others and acting on their behalf is the pathway to eternal life,” Bishop Cunningham said.

“The events of these past several days have drawn our attention to our brothers and sisters who left their homeland and family members, traveled over dangerous and unsecured routes under the threat of physical harm and even death to reach a better life. The tragic situation of migration struck very close to home this week. Our own Catholic Charities reports that 220 refugees who have been vetted and approved to come to Syracuse have been put on hold. This situation has been replicated across our country, and as people of faith we cannot remain silent,” he said to applause.

“We thank our mayor and our elected leaders who have a responsibility to protect our borders and to put procedures in place which will carefully scrutinize those who wish to enter our country. However, blanket refusals to allow immigrants from a given nation, ethnic or religious group to enter our country is un-American and un-Christian,” he continued, again to applause.

In the words of Pope Francis in his address to Congress in 2015, “we must ‘view refugees as persons, seeing their faces and listening to their stories, trying to respond as best we can to their situation. To respond in a way which is always humane, just and fraternal. We need to avoid a common temptation nowadays: to discard whatever proves troublesome. Let us remember the Golden Rule: “Do unto others as you would have them do unto you”’” the bishop said, once again to applause.

In these days when “many deserving and needy refugees are being denied entrance to our country we must be clear that the stranger knocking at our door is none other than Christ himself,” Bishop Cunningham said.

As Mass ended, the bishop again thanked those in attendance. He noted “those who are not natives of Syracuse or the Syracuse Diocese” and Syracuse Mayor Stephanie Miner, who was seated in the front pew, acknowledging her declaration of Syracuse as a sanctuary city, which drew applause once more from the congregation.

“Our work is only beginning,” the bishop said, noting hundreds of refugees were settled over the last two years but “we have 220 more waiting to come in. We pray that the barriers will be removed, that they will soon be with us. We need to protect our borders. We also need to be welcoming.”

Papy Amani and members of the Congolese choir from All Saints Church in Syracuse sang the hymn “We Are All Invited to the Table of the Lord” in Swahili during the Mass. Amani said they wanted to participate in the Mass because they were shocked by the president’s decision as well as hurt, especially those who came to the country as refugees. Amani, like most members of the choir, came to the U.S. as a refugee, he explained; he is originally from the Democratic Republic of the Congo. They also wanted to pray and be in solidarity with the community, he said.

Cathedral parishioner Mary Dougherty said the Mass “spoke to my own personal beliefs about welcoming people from all over the world as Jesus would want us to do…. I’m sad for what’s going on in the country today and this gave me some hope that we will unite and welcome all.”

Her daughter Caroline, 13, who was an altar server for the Mass, expressed similar sentiments. “People don’t realize that these are actual people,” she said. “They’re not just names in a book or numbers in a statistic; they’re real people and they have feelings. And also we were all immigrants.”

Following Mass, Bishop Cunningham stressed that rather than a political issue this is “a human issue…. There are so many instances in the New Testament where Christ reminds us to welcome the stranger in our midst, and to shelter the homeless. These are the works of mercy that we celebrated last year. We’re giving it life in this particular instance.”