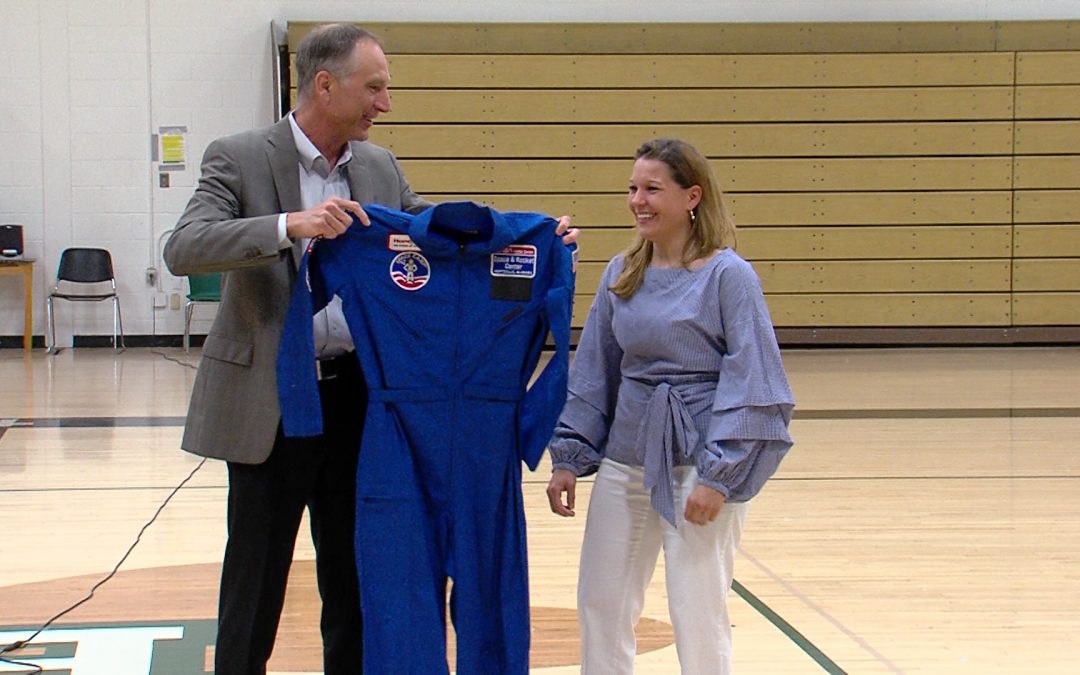 A moon walk might be too sedate for Bishop Ludden Jr./Sr. High School math teacher Michelle Hall. She practically danced over to don her blue flight suit May 31 at a ceremony announcing her upcoming attendance at the Honeywell Educators at Space Academy.

During five days this month at the U.S. Space & Rocket Center in Huntsville, Ala., she and 199 other teachers from around the world will form teams to simulate jobs such as repairing satellites, adding a module to the International Space Station, and walking on the moon. If they want to, they can board the centrifuge and experience G-forces. Her students recently experimented with G-forces by studying how marbles react while traveling through homemade roller-coasters.

The space academy strives to make the teachers more effective educators. They will be living as if they were on a space shuttle.

Always fascinated by the stars and science, Hall won the scholarship by writing an essay and filling out an application. But would she actually go into space?

“Not a chance,” she said with a laugh. “I would actually be much better off on the sidelines taking care of the numbers and organizing and managing it. The actual in-that-teeny-little-rocket, not so much.” Her only joshing quibble with her spiffy, patch-emblazoned flight suit is that it isn’t Bishop Ludden Gaelic Knights green. She intended to wear it for her first-period class and then retire it momentarily because her students were building things, painting, and working with papier-mache.

“She competed with thousands of teachers from around the world … to win this scholarship,” said John McAuliffe, Syracuse program director for Honeywell, which partners with the rocket center. Historically, McAuliffe said, teachers from 62 countries, all 50 states, and two territories have won space-academy scholarships.

“As you can see she’s got a ton of energy,” McAuliffe said of Hall. That will be handy because “she’s going to be training like an astronaut,” he added. The program is geared toward high-school science, he said, so that she can bring back a curriculum to Bishop Ludden. “I am going to take any content that I learned … and apply it to real-world scenarios,” she said.

Hall has been teaching for 14 years, previously in Japan, Tennessee, Baldwinsville, Mexico, BOCES, and the city of Syracuse. In her first year at Ludden, she immerses her students in projects. They are already making scale models of tiny houses and a miniature golf course. They have to know angles in order to figure out how to get a hole-in-one. Math, she said, “is definitely why things work. … Math is very exciting.”

Honeywell’s McAuliffe agreed:  “We’re about innovation and technology.” He said his company has completed a cleanup of Onondaga Lake and will be putting in a bike trail. “In order to continue to develop technology,” he said, “we need to have engineers and scientists that are going to be able to take jobs in those careers.” Research shows that to enter those professions, students must start with math and engineering at the junior-high level, he said.

Without loving math, one will not be able to reach out into space.

Watch video of the presentation, via Syracuse Catholic Television: