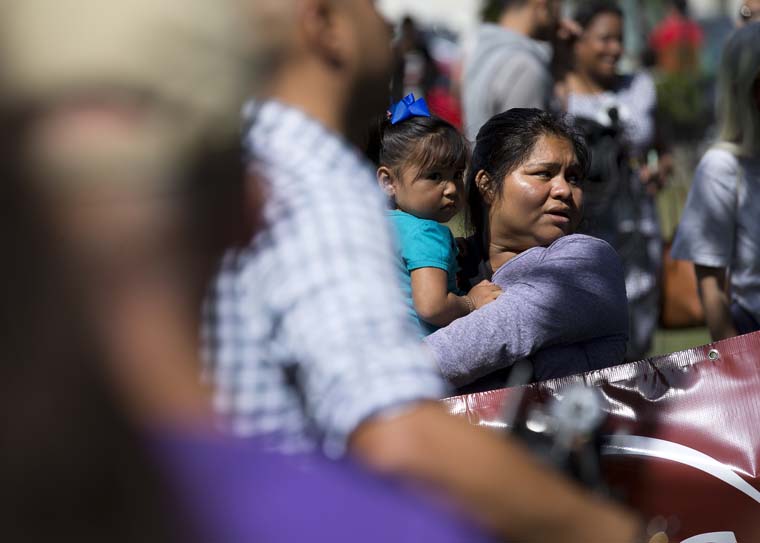 WASHINGTON (CNS) — The Trump administration’s newly released immigration policy proposals “do not provide the way forward for comprehensive immigration reform rooted in respect for human life and dignity, and for the security of our citizens,” said Bishop Joe S. Vasquez of Austin, Texas.

“They are not reflective of our country’s immigrant past, and they attack the most vulnerable, notably unaccompanied children and many others who flee persecution,” the bishop said in an Oct. 10 statement as chairman of the U.S. Conference of Catholic Bishops’ Committee on Migration.

“Most unfortunately, the principles fail to recognize that the family is the fundamental building block of our immigration system, our society and our church,” Bishop Vasquez said.

His remarks came in response to a 70-point immigration policy proposal from President Donald Trump released the evening of Oct. 8.

Bishop Vasquez also urged Congress to act quickly on a bill to legalize the Obama-era Deferred Action for Childhood Arrivals program, or DACA, and allow the approximately 800,000 youth — known as “Dreamers” — who have benefited from DACA stay in the country.

“We exhort Congress to take up legislation and move forward promptly to ensure true protection for Dreamers once and for all,” the bishop said.

Trump said that in any bill to legalize DACA, Congress must include funding for a U.S-Mexico border wall and more Border Patrol agents — as laid out in his policy proposals — or he won’t sign such a measure.

On Sept. 5, U.S. Attorney General Jeff Sessions announced that the program, which began under then-President Barack Obama in 2012, would end under the Trump administration.

DACA provides a work permit and temporary reprieve from deportation for youth brought to the U.S. as children without legal permission, if they meet certain criteria. Sessions said the program was “unilateral executive amnesty,” and said its beneficiaries had taken away jobs from “hundreds of thousands of Americans.”

Trump campaigned on a promise that he’d get rid of the DACA program, but after Sessions’ announcement on ending the program, Trump was working with Democrats to find a way to help the “Dreamers” stay in the country.

Since the release of Trump’s 70-point immigration proposal, Pelosi and Schumer have said any DACA deal with Trump was off. Trump’s proposal includes 27 different suggestions on border security; 39 improvements to enforcement on immigration laws in the U.S.; and four major changes to the legal immigration system.

“Every day that passes without that solution, these youth experience growing apprehension for their futures and their families,” he continued. “Each passing day brings us all a step closer to March 2018, when DACA recipients will begin to lose legal work privileges, and far worse, face the threat of deportation and family separation.”

Bishop Vasquez added: “Together with so many others of goodwill, we shall continue to offer welcome and support to these remarkable young people, and we shall not stop advocating for their permanent protection and eventual citizenship.”