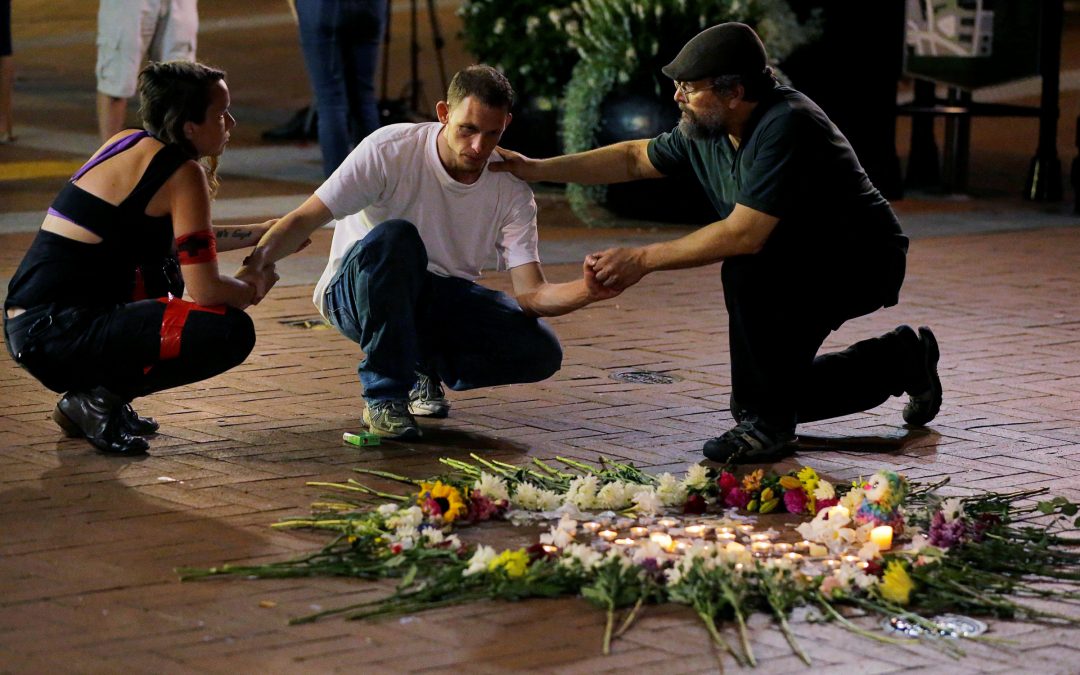 WASHINGTON (CNS) —  In the aftermath of a chaos- and hate-filled weekend in Virginia, Catholic bishops and groups throughout the nation called for peace after three people died and several others were injured following clashes between pacifists, protesters and white supremacists in Charlottesville, Virginia, Aug. 11 and 12.

A 32-year-old paralegal, Heather D. Heyer, was killed when a car plowed into a group in Charlottesville Aug. 12. The driver was identified as James Alex Fields, who allegedly told his mother he was attending a rally for President Donald Trump. Reports say the car allegedly driven by Fields plowed into a crowd during a white nationalist rally and a counter-rally the afternoon of Aug. 12.

Attorney General Jeff Sessions said early Aug. 14 the “evil attack” meets the legal definition of domestic terrorism and suggested pending federal charges for Fields, who was arrested and was being held without bail. Fields was formally charged Aug. 14 by a Charlottesville judge with second-degree murder, three counts of malicious wounding, and failure to stop in an accident that resulted in death.

Outside the Charlottesville courthouse where Judge Robert Downer handed down the charges and Fields appeared via video link from jail, white supremacists and counter-protesters clashed, but there were no arrests.The same day, anti-racism rallies were held in several cities.

The bishop of the Catholic Diocese of Richmond, Virginia, was one of the first to call for peace following the violence in Charlottesville late Aug. 11, which only became worse the following day.

On the evening of Aug. 11, The Associated Press and other news outlets reported a rally of hundreds of men and women, identified as white nationalists, carrying lit torches on the campus of the University of Virginia. Counter-protesters also were present during the rally and clashes were reported.

The following day, at least 20 were injured and the mayor of Charlottesville confirmed Heyer’s death later that afternoon via Twitter after the car allegedly driven by Fields rammed into the crowd of marchers. Two Virginia State Police troopers also died when a helicopter they were in crashed while trying to help with the violent events on the ground. CNN reported that 19 others were injured and remained hospitalized Aug. 14 but were listed in good condition.

“In the last 24 hours, hatred and violence have been on display in the city of Charlottesville,” said Richmond Bishop Francis X. DiLorenzo in a statement on the afternoon of Aug. 12. “I earnestly pray for peace.” Charlottesville is in Bishop DiLorenzo’s diocese.

Cardinal Daniel N. DiNardo of Galveston-Houston, president of the U.S. Conference of Catholic Bishops, called the events “abhorrent acts of hatred” in an Aug. 12 statement. He said they were an “attack on the unity of our nation.”

Virginia’s governor declared a state of emergency Aug. 12 when violence erupted during the “Unite the Right” white nationalist protest against the removal of a statue of a Confederate general, Gen. Robert E. Lee. But the trouble already had started the night before with the lit torches and chants of anti-Semitic slogans on the grounds of the University of Virginia.

“Racism is evil,” President Trump said in an Aug. 14 statement. “And those who cause violence in its name are criminals and thugs, including the KKK, neo-Nazis, white supremacists, and other hate groups that are repugnant to everything we hold dear as Americans. … As I said on Saturday (Aug. 12), we condemn in the strongest possible terms this egregious display of hatred, bigotry, and violence. It has no place in America.”

Trump was excoriated by many across the country for his Aug. 12 statement, because he condemned hatred, bigotry and violence “on many sides” in Charlottesville and did not specifically target white supremacists then, his critics said.

Other groups, including many faith groups, seeking to counter the white nationalist events showed up during both events. Authorities reported clashes at both instances.

“Only the light of Christ can quench the torches of hatred and violence. Let us pray for peace,” said Bishop DiLorenzo in his statement. “I pray that those men and women on both sides can talk and seek solutions to their differences respectfully.”

Bishop Michael F. Burbidge of Arlington, Virginia, which covers Northern Virginia, tweeted on what was happening in Charlottesville and followed up with a lengthy statement, calling the events “saddening and disheartening.”

“The more we read about the demonstration of racism, bigotry and self-proclaimed superiority made it seem as though we were living in a different time,” said Bishop Burbidge, noting “much progress made” since the civil rights movement of the 1960s. “And yet, there are some who cling to misguided and evil beliefs about what makes American unique and remarkable.”

He condemned “all forms of bigotry and hatred,” denouncing “any form of hatred as a sin.”

“We must find unity as a country. Unity does not mean we all believe the same things,” Bishop Burbidge said. “We must be united by a shared interest in freedom, liberty and love for our neighbor. … Without respect for each other, even when we adamantly disagree, we will see more violence and discord in this great nation.”

On Twitter, Jesuit Father James Martin also denounced racism as a sin and said: “All Christians, all people of faith, should not only reject it, not only oppose it, but fight against it.”

Other bishops quickly followed in denouncing the violence.

“May this shocking incident and display of evil ignite a commitment among all people to end the racism, violence, bigotry and hatred that we have seen too often in our nation and throughout the world,” said Bishop Martin D. Holley of Memphis, Tennessee, in an Aug. 13 statement. “Let us pray for the repose of the souls of those who died tragically, including the officers, and for physical and emotional healing for all who were injured. May ours become a nation of peace, harmony and justice for one and all.”

Chicago’s Cardinal Blase J. Cupich said Aug. 12 via Twitter: “When it comes to racism, there is only one side: to stand against it.”

Archbishop Charles J. Chaput of Philadelphia called racism the “poison of the soul,” and said in a statement that it was the United States’ “original sin” and one that “never fully healed.”

He added that, “blending it with the Nazi salute, the relic of a regime that murdered millions, compounds the obscenity.”

On Aug. 13, Cardinal DiNardo, along with Bishop Frank J. Dewane of Venice, Florida, chairman of the USCCB Committee on Domestic Justice and Human Development, issued a statement saying: “We stand against the evil of racism, white supremacy and neo-Nazism. We stand with our sisters and brothers united in the sacrifice of Jesus, by which love’s victory over every form of evil is assured.”

Baltimore Archbishop William E. Lori expressed sorrow about the events in a tweet, saying, “Our deepest prayers go out to those killed and wounded in Charlottesville. We must all work together to end the scourge of racism, and unite for the common good of all. Racism must be countered with love & respect.”

“We all watched the violence in Virginia this weekend with sadness and disgust,” Bishop Donald J. Hying of Gary, Indiana, tweeted. “The destructive evil of racism, Nazism and supremist ideologies that have no place in any human society.”

He added, “We join both our prayers and our condemnation to that of millions of people in our country and world who want to build an authentic civilization of life and love.”

Cardinal Joseph W. Tobin of Newark, New Jersey, said the Catholic men, women and children of the archdiocese of Newark, “people who trace their roots to every continent of the world and represent every race and ethnicity” viewed with horror the events in Charlottesville and condemned “the racism and vicious rhetoric that contributed to this tragic moment in our nation’s history.”

“We stand in prayer and solidarity with all people of goodwill and we witness to our Christian calling to ‘love your enemies … that you may be children of your heavenly Father.”

“Hatred & vile racist actions defile the USA. Such activity is NEVER justified. Those who planned these acts must be denounced & defied,” said Atlanta Archbishop Wilton D. Gregory in a tweet.

Bishop James D. Conley of Lincoln, Nebraska, tweeted: “Pray for an end to the evil of racism. And pray, especially today for its victims. Pray for justice and mercy in our nation.”

New Orleans Archbishop Gregory M. Aymond said what took place in Charlottesville “demonstrates again the racism, hatred, and violence that exists in our world today. This can never be justified and is contrary to Gospel values.”

He urged Catholics “to stand united against the evil of racism, white supremacy and neo-Nazism. We must be prophetic in speaking about and living the values of Jesus.”