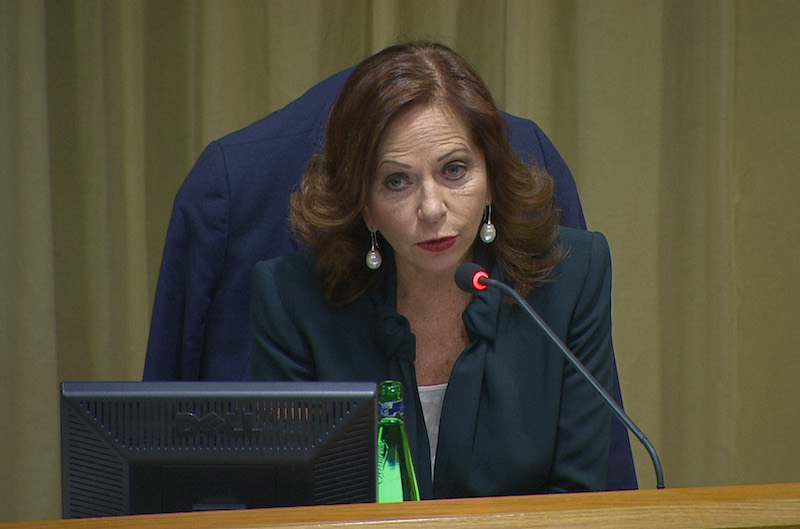 Television reporter Valentina Alazraki of Televisa speaks during a meeting on the protection of minors in the church at the Vatican Feb. 23, 2019, in this image taken from Vatican television. (CNS photo | Vatican Television)

VATICAN CITY (CNS) — If they are truly serious about fighting clerical sex abuse, bishops must join forces with journalists and not view them as enemies plotting against the Catholic Church, Mexican journalist Valentina Alazraki said.

Alazraki, who has covered the Vatican for over four decades, told bishops at the Vatican summit on abuse Feb. 23 that journalists can help them root out the “rotten apples and to overcome resistance in order to separate them from the healthy ones.”

“But if you do not decide in a radical way to be on the side of the children, mothers, families, civil society, you are right to be afraid of us, because we journalists — who seek the common good — will be your worst enemies,” she warned.

The veteran journalist was invited to speak at the summit about the importance of transparency with journalists and media outlets.

Alazraki, who began covering the Vatican in the final years of St. Paul VI’s pontificate, said church leaders too often blamed journalists’ coverage of the abuse scandal as a plot “to put an end to this institution.”

“We journalists know that there are reporters who are more thorough than others and that there are media outlets more or less dependent on political, ideological or economic interests,” she said. “But I believe that in no case can the mass media be blamed for having uncovered or reported on abuses.”

Recalling the words of Pope Benedict XVI, Alazraki told bishops that clerical sex abuse is neither a rumor or a gossip but a crime that “comes not from external enemies but arises from sins within” the church.

Addressing the accusation that reporters are often harsher on the church than on other institutions when it comes to sex abuse, the Mexican journalist said that is natural “by virtue of your moral role.”

“Stealing, for example, is wrong, but if the one stealing is a police officer it seems more serious to us, because it is the opposite of what he or she should do, which is to protect the community from thieves,” she explained. “If doctors or nurses poison their patients rather than take care of them, the act draws even more of our attention because it goes against their ethics, their professional code.”

She also warned bishops on the dangers of concealing the truth, citing the case of Marcial Maciel, the founder of the Legionaries of Christ, as the church’s “most emblematic case of unhealthy, corrupt communication.”

The case, she said, involved not only ignorance, lack of preparation and disbelief on the part of church officials, but also corruption.

“Behind the silence, the lack of healthy, transparent communication, quite often there is not only the fear of scandal, concern for the institution’s good name, but also money, compensation, gifts, construction permits for schools and universities perhaps in areas where construction was not permitted,” she said. “I am speaking of what I have seen and thoroughly investigated.”

Journalists, she said, do not expect bishops to inform them of every accusation against a priest. Nevertheless, information pertaining to priests that have abused should be released as quickly as possible and “with clarity.”

Offering advice to the bishops on how they can foster transparency when communicating, Alazraki stressed the need for bishops to meet with survivors which helps them not only in confronting the issue of abuse but “also in the way in which you communicate and resolve it.”

“The pope has told us that he meets them regularly, at Santa Marta, that he considers them one of his priorities,” she said. “You should do the same; I do not believe you have less time than the pope.”

Open communication with journalists and media outlets will be an opportunity for the church to take the initiative in denouncing abuses and will allow the bishops “to play offense and not defense,” Alazraki said.

“I hope that after this meeting you will return home and not avoid us, but instead seek us out,” she said. “That you will return to your dioceses thinking that we are not vicious wolves, but, on the contrary, that we can join our forces against the real wolves.”