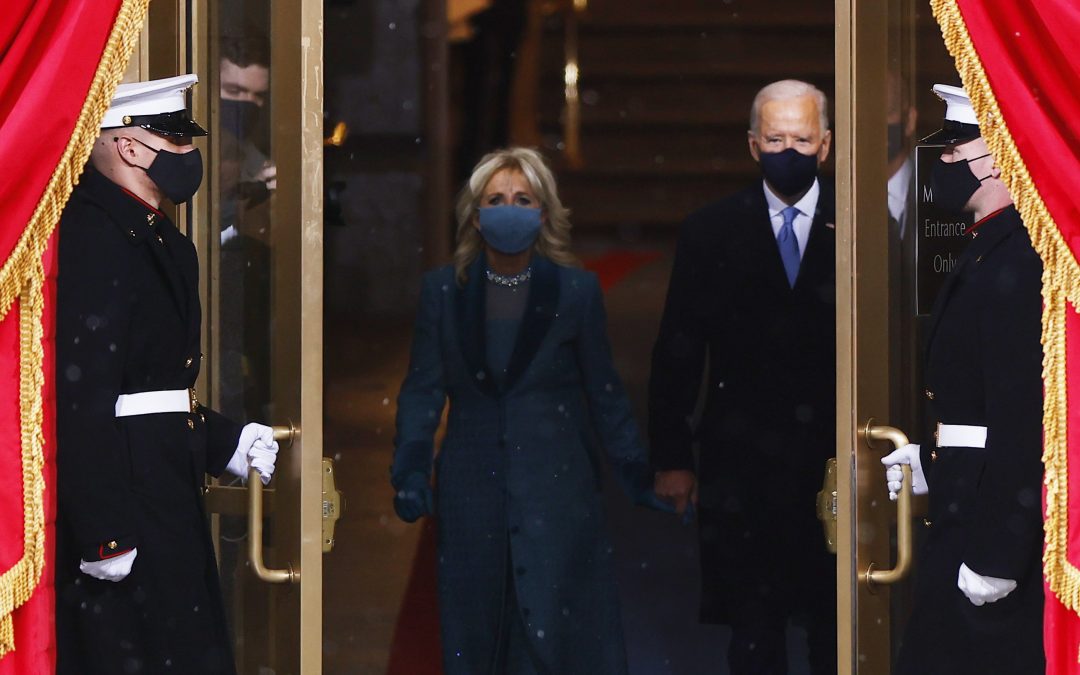 WASHINGTON (CNS) — Bishops throughout the country welcomed the inauguration of Joe Biden as the nation’s 46th president, saying it was a celebration of democracy and liberty, while praying for unity and reconciliation in the face of deep political divides.

They also called for civil dialogue on issues on which there is disagreement between church doctrine and public policy in statements released Jan. 20.

In addition, several bishops voiced optimism that the new administration will work to achieve the common good and overcome the long-standing challenges posed by the coronavirus pandemic and the many threats to human dignity.

“An inauguration is a beginning. That means that the work of all of us has just begun as together we build our nation,” said Bishop Robert P. Deeley of Portland, Maine, congratulating the incoming president.

He reminded Catholic Americans of their call to share the love and mercy “as people of kindness and virtue, treating each other with the respect and dignity promised to us all.”

The bishop also urged people to “seek ways to appreciate those around us, particularly people in our lives who hold different views than our own.”

“Listen to their voices,” Bishop Deeley said, “and try to understand what unique experiences in their own lives brought them to the place in life they are today. It is our only way forward. We are one nation under God, where we love our brothers and sisters, defend the sanctity of human life and celebrate the freedom of religion.”

Bishop John E. Stowe of Lexington, Kentucky, bishop-president of Pax Christi USA, said he was offering a prayer of thanksgiving and breathing “a deep sigh of relief” that the transition from one administration to another was occurring peacefully despite the threat posed by the Jan. 6 insurrection at the U.S. Capitol.

In a reflection released by the Catholic peace group, Bishop Stowe said his reaction is rooted in knowing that Biden is a man of faith, “knows something of the content of that written portion of God’s word and he has chosen to live his life as a follower of the Word made flesh.”

As Biden takes office, Bishop Stowe said he will focus not on the new president’s shortcomings “because I know there will be plenty to disagree about and work to change” during his term. “Today I give thanks that a person of decency, morals and character will inhabit the White House again, and I am proud that he is a Catholic and has been formed by the values of our faith,” he added.

The archbishop expressed hope the incoming administration “will work with the church and others of goodwill” to address threats to human dignity, especially abortion, religious conscience and family structure. He also called for prayers for Biden and incoming Vice President Kamala Harris as they work to address the intense divisions across society.

Bishop Edward B. Scharfenberger of Albany, New York, offered a prayer that Biden and Harris “will guide our nation with justice, integrity and courage as we face unprecedented challenges.”

The bishop acknowledged that Americans have disagreements on important non-negotiable issues, “the most critical being respect for and protection of all human life from conception to natural death,” but he hoped Biden’s Catholic faith will influence policies that address “the care and dignity of the human person.”

“Our country is only as strong as the weakest among us,” Bishop Scharfenberger added. “Our hope and prayer is that President Biden and his administration will keep that truth at the heart of their policies and programs.

Meanwhile, Bishop Michael W. Fisher of Buffalo, New York, called on the country to “come together under the new administration “to celebrate what unites us as Americans.”

He, too, called for prayers that Biden and Harris lead the country forward “while confronting the deep divisions that persist, and a still threatening pandemic that has taken so many lives and upended the security and prospects of even more.”

The recently installed Bishop Fisher also urged Americans to “recommit ourselves to the work of healing, to listening to one another, to open and respectful dialogue and to pursuing the high ideals, rights and privileges bestowed by God who reigns supreme, and guaranteed by our Constitution to all.”

Across the country in San Francisco, Archbishop Salvatore J. Cordileone said he supported Archbishop Gomez’s “timely call for healing as a country.” He stressed that even though abortion remains the U.S. bishops’ “preeminent priority,” it is not the only social concern the church holds.

“Catholics must and do speak out on many issues affecting the equal dignity of all, but if life at its most vulnerable beginnings is not protected, then none of us is safe. Affirming this equal human dignity at every stage and in every condition is the path to healing and unity,” Archbishop Cordileone said.

Archbishop Aquila said he hoped Biden will accept the invitation “for true dialogue with the church on all issues, especially those that involve the right to life and the God-given dignity of the human person.”

The Denver prelate said he prays that “when his party seeks to advance ‘moral evils and threaten human life and dignity, most seriously in the areas of abortion, contraception, marriage, and gender,’ he will have the courage to stand up for the truth of God’s love and plan revealed to us by Jesus.”

The Prayer of St. Francis was the preferred prayer of Bishop Michael F. Burbidge of Arlington, Virginia, in his inauguration message in which he called for healing of the “discord and wounds” that exist in the U.S.

He sought prayers for Biden so that he upholds “the truths revealed and proclaimed in the Catholic faith he professes.”

Other elected and public officials of both political parties also deserve prayer, Bishop Burbidge said, so that they “transcend political divides in service to the common good.”

Bishop Joseph C. Bambera of Scranton, Pennsylvania, Biden’s hometown, invited the faithful of the diocese and all people to pray for the nation and its new leaders.

“At a time when our country is facing not only a global pandemic but also division and hostility, we must all pray for peace and unity,” he said. “No matter our differences, we are one human family our brothers’ and sisters’ keepers.”

In addition to prayer, Bishop Kevin C. Rhoades of Fort Wayne-South Bend, Indiana, urged people to demonstrate the love of their neighbor “including those with whom we disagree.”

“We reject all violence and hatred. Even when there are profound disagreements in politics, we must respect one another and engage in discussions with civility, rejecting hateful rhetoric and personal attacks,” Bishop Rhoades said.

Noting that the Catholic vote split evenly between Biden and Donald Trump, Bishop Rhoades said political allegiances or ideologies should not divide the faithful. “We must be united in our common faith and in charity, united with the pope and the bishops in fidelity to the church’s moral and social teaching and to the obligations of justice and charity that we have in society,” he added.

In Detroit, Archbishop Allen H. Vigneron invited Catholics to remember that the peaceful transition to a new administration “is an opportunity to recommit the best of ourselves to advance the common good, model civility, protect human dignity, and, most importantly, pray for our leaders and our beloved country.”

Cardinals Sean P. O’Malley of Boston and Blase J. Cupich of Chicago added their congratulations for the new Biden administration and their prayers that the country will heal its divisions and urged every life, from the womb to natural death, be protected and nurtured.

Holy Cross Father John I. Jenkins, president of the University of Notre Dame, congratulated Biden on becoming president, noting how he was encouraged that Biden began Inauguration Day by attending Mass at the Cathedral of St. Matthew the Apostle in Washington along with House and Senate Republican and Democratic leaders.

He also remembered that Biden received the school’s highest honor, the Laetare Medal in 2016 with former Republican House Speaker John Boehner of Ohio. Recalling the ceremony, Father Jenkins said Biden often reminded his fellow Democrats that Republicans in Congress are “our opponents, not our enemies.”

“May his leadership help quell the venomous enmity so prevalent in our nation today,” Father Jenkins said.