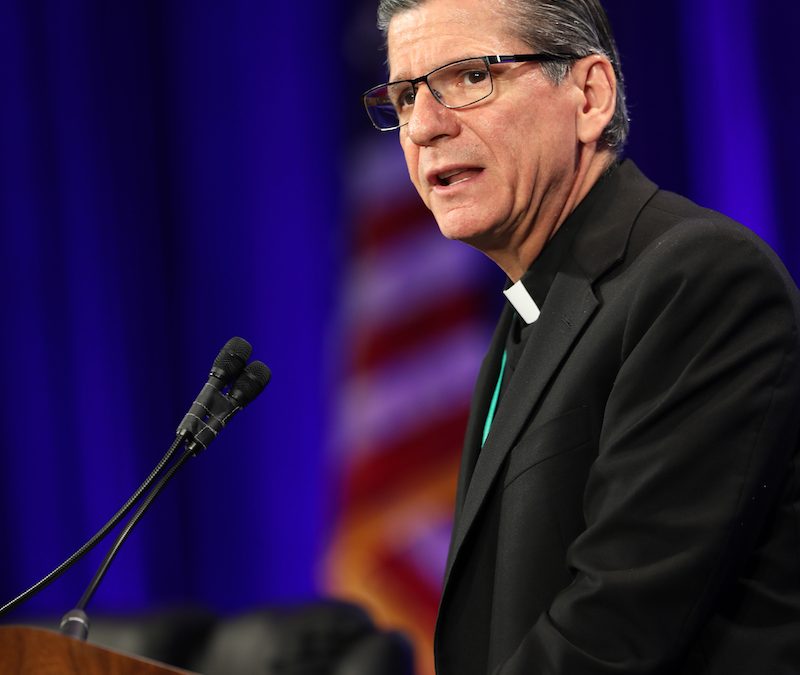 Archbishop Gustavo Garcia-Siller of San Antonio speaks Nov. 13, 2018, at the fall general assembly of the U.S. Conference of Catholic Bishops in Baltimore. At a news conference in El Paso, Texas, Feb. 27, the archbishop said the real emergency at the southern U.S. border was “how we are going to take care of those who are discriminated and those who are disadvantaged.” (CNS photo | Bob Roller)

EL PASO, Texas (CNS) — Bishops from Texas and Mexico called for a solidarity with migrants as a Catholic response to the national emergency declared at the U.S.-Mexico border.

They also questioned if the emergency — declared by U.S. President Donald Trump to free up funds for building a border wall — was as urgent as attending to the waves of migrants seeking asylum in the United States, but who are forced to wait months to make their claims.

“Our nation, the United States, has expressed that it is in a national emergency. … We went to the border yesterday. The emergency is not here,” Archbishop Gustavo Garcia-Siller of San Antonio said Feb. 27 at the closing of a border bishops’ meeting on immigration issues.

“The emergency is what people are going through to try to come here to have peace, to have understanding, to have respect and have a genuine welcome. All the rhetoric that has been building up about how bad the ‘other’ people are has built up to this national emergency, which is a lie,” Archbishop Garcia-Siller added.

The arrival of migrants at the U.S.-Mexico border has caused conflict among Catholics, some of whom support the measures implemented, such as slowing the speed at which asylum claims are accepted at ports of entry, and endorse the idea of building a border wall.

Bishops from the borderlands used their Feb. 25–27 meeting to consult with Catholics working on migration issues and the leaders of other faith communities about how to respond to the crush of migrants fleeing poverty and violence in Central America, but bumping up against an increasingly more complicated and fortified border.

“It is leaders like us and others,” Archbishop Garcia-Siller said, who need “to unmask the situation to be able to present the truth in the way we see it.”

Dioceses along the border are increasingly attending to migrants. The Diocese of El Paso has 60 employees working in its migrant ministries and participates in an interfaith initiative operating 13-15 temporary shelters for asylum-seekers.

That attention may shift to Mexico as the U.S. government rolls out a plan known as “Remain in Mexico,” which requires asylum-seekers to stay outside the United States — in Mexican border cities — while their claims are heard in U.S. courts.

The plan is already operational in Tijuana, Mexico, and Catholic migrant advocates expect it to be put into effect in other Mexican border cities, many of which are insecure and unprepared for receiving so many families in need of shelter and humanitarian assistance.

“To say ‘no’ to people coming for asylum just aggravates the situation in Mexico,” Archbishop Garcia-Siller said.

In El Paso’s sister city, Ciudad Juarez, Mexico, the diocesan shelter has filled and asylum-seekers must put their name on a list and wait to make a claim at a U.S. ports of entry in El Paso. Fewer than 50 names are called on a daily basis, said Father Javier Calvillo Salazar, shelter director.

“The Return to Mexico policy, if it were implemented in our border community, it would be a disaster,” said Dylan Corbett, director of the diocesan HOPE Border Institute in El Paso.

“Right now there are 1,500 to 2,000 migrants on the other side of the border waiting their turn for asylum to be granted,” he explained. “If that were implemented here (in El Paso), we would have refugee camps on the Mexican side of the border.”