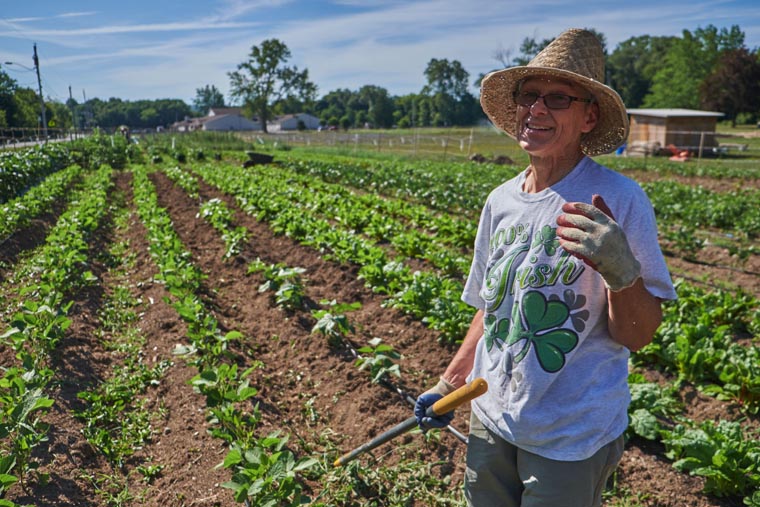 Looking like sprigs of spotted coral, the remains of last year’s kale and collard greens formed a line in the soil as spring began at the Brady Faith Farm in Syracuse. Wood chips collected for weed management sat in piles, bleaching in the sun.

Give it a month or two and people will be browsing among all sorts of colorful new plants that have been pre-stamped with neighborhood approval.

“You’ve gotta love the land, man. You gotta love it. That’s copyright- protected,” said a bubbly Derrick Powell, a nearby resident who was passing by the farm. If Powell feels his description of the farm is proprietary, the crops themselves are meant to be sold to everybody.

Starting its second year, the agriculture operation is one of almost two dozen ministries of the Brady Faith Center, based near the farm on Syracuse’s south side. Together they form what might be considered the Brady Faith trail. The farm will double its size under cultivation this year to two acres. The whole tract off Valley Drive covers six acres.

“We’re really excited. … We want to help people in our community get access to affordable, fresh, locally grown produce,” said Farm Coordinator Jessi Lyons. Any money earned will go back into the operation of the farm, she said.

This year the farm offers subscriptions called CSAs: community-supported agriculture. Subscribers will pay to receive a bag of food every week or every two weeks. “So, really exciting,” Lyons said.

CSA subscribers will pay at the beginning of the season. Subscribers who are in the Supplemental Nutrition Assistance Program (SNAP) will be allowed to pay in weekly installments.

Subscribers will pay online (follow the link at bradyfaithcenter.org) or with cash or check at the Brady Faith Center. If they are receiving SNAP, they will pay at the point of pickup.

The farm hopes to sell 40 CSA shares, “and we have funding to subsidize half of them for low-income people,” Lyons said. So 20 of those families would receive a 50 percent discount.

• Produce will be sold on Thursdays at the regional market next to NBT Bank Stadium. Last year the sales were conducted mainly at neighborhood farm stands.

• Brady Faith Farm is hiring a market manager to help run the CSA program and market stands. The farm will also hire seasonal summer labor through CNY Works and Jobs Plus.

• The operation will partner with Salt City Harvest Farm in Kirkville and Esker Ridge Farm in Lysander. The partnership will allow Brady to offer crops including long beans; specialty beans; Asian eggplants; Asian peppers; more root crops such as onions, garlic, and potatoes; and winter squash. Brady will also try to partner with other businesses to include coffee and honey in CSA boxes.

• By late August, Lyons hopes to have installed a plastic-covered greenhouse, allowing the farm to grow crops through the winter. For example, peppers and tomatoes could be planted in March and April. In one system that might be used, tubing would carry hot water, heating the greenhouse soil. The heat then would rise off the soil and help keep frost off the plants.

The early crops are already in the works at Brady. Temperatures in the 50s can support the planting of crops such as beans, broccoli, beets, kale, and chard. Tomatoes are planted about the middle of May.

Danielle Duncan was walking by recently with her daughters. They live within a half-mile of the farm.

“The view is beautiful, which is awesome,” Danielle said. Before the farm went in, the plot of land was an eyesore, she said. She is also glad that the children at the Southside Academy Charter School, which is right next to the farm, get to come over and pick samples of vegetables.

Danielle’s daughter Ranelle Duncan, a sixth-grader at the charter school, likes the farm too. “I think it is helpful to the neighborhood because some people, they can come and pick the stuff here,” she said. She is fond of carrots, peppers, strawberries, and kale.

Her sister, Janelle Duncan, a third-grader, said, “I like the farm because we get to pick fruits and vegetables down here. And another thing I like about this farm is that … they have good strawberries, and the food is healthy.”

The effervescent area resident Powell, 34, who had kidded that he was copyrighting his catchphrase for the farm, said he was impressed by last year’s production of lettuce, collard greens, and gigantic sunflower plants. He pumped out pro-farming phrases as if they were sunflower-seed shells.

“Look at all this land; it’s just wonderful, it’s wonderful,” he said. “I’m glad they’re doing something with this land. ’Cause it was buildings right here. … But you gotta admit it’s something different. It is, especially in this neighborhood. … And there’s a school right there! … I thought the school was doing it [running the farm].”

And if he could put his neighborly trademark on the land, he would say this: