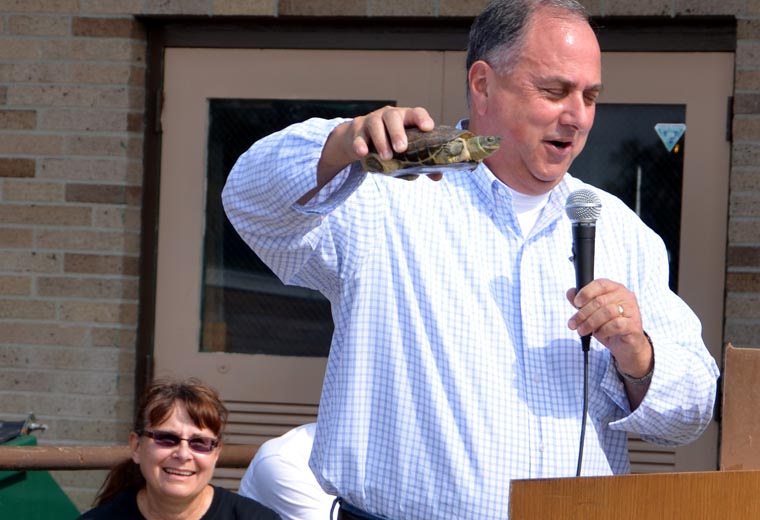 “It’s kind of surreal to be a high school principal. It’s even more so when you’re at the high school you attended,” Bucci said.

In 2011, Bucci was named president of the four Catholic schools in the county as well as principal of Seton Catholic Central High School.

“If you asked myself and my classmates 45 years ago if you could envision Rich Bucci being principal of Catholic Central I think everybody would say: ‘I don’t think so,’” he said.

In the more than four decades since he walked the halls as a student at 70 Seminary Avenue, there has been a series of mergers and closings in the Catholic schools in Broome County.  There are now four elementary schools and one middle/high school, all working together.

Bucci came to the system with an impressive resume. He followed up a 12-year stint as mayor of the City of Binghamton with six years as director of professional development and curriculum at the Vestal Central School District.

While much of his career had been spent in public service, Bucci studied education in college.  He earned a BA in social science and education from St. Bonaventure University in 1976 and an MS in education administration from the University of Scranton in 1979. Bucci went to SUNY-Cortland to complete an educational certification in 2006.

When he heard six years ago there was a search for a principal at Seton Catholic Central, Bucci dismissed the idea, thinking they already had someone in mind. That is until the search committee contacted him.

“I think the thing that probably made it most attractive is that I had gone to school here and I was very familiar with the school. I followed the school over the years, even though I didn’t have a direct relationship with it. But it just intrigued me.” Bucci said.

Bucci took over as not only principal of Seton Catholic Central, but also as president of the Catholic Schools of Broome County.

Under his tenure, three separate elementary schools — All Saints in Endicott, St. James in Johnson City, and St. John’s in Binghamton — started working together. Seton Catholic Central now includes students in grades 7-12. All are under the Catholic Schools of the Diocese of Syracuse.

“In order to remain sustainable for the future, we have to work together; we have to coordinate our resources. We have to be strategic in how we act, so that meant we had to come together,” Bucci said.

“We’ve been engaged in a lot of new initiatives and a lot of positive change and I think that’s a sign of a very vital, dynamic school system,” he said.

Part of what’s happened is shared resources. For example, the schools are saving money with administration: one controller, one director of admission, and one development director. The elementary schools now have a joint curriculum and combined training. Bucci has also worked to bring new focus into the academics overall.

There’s a pre-engineering program called “Project Lead the Way” affiliated with Rochester Institute of Technology. Students at Seton Catholic Central can earn college credit for the engineering courses they take. The program is expanding in the coming school year.

“Concepts of pre-engineering are going to be taught at the elementary level,” Bucci said. “In a region of the state where engineering has been a backbone of our economy, I think it’s important that we do that. That’s part of the curricular wave of the future.”

In the last six years, Bucci said, nearly $1 million has been invested in the buildings. There are new computer labs. Science labs have been upgraded and expanded. At Seton Catholic Central, an engineering lab has been added.

This year, students in grades 3-12 were each given a Chromebook computer to use in class. The high school students can take them home for doing assignments. An anonymous donor provided $175,000 of the $400,000 cost of that initiative.

“I think it really transforms the way teaching and learning are taking place,” Bucci said.

Theology remains an important part of the Catholic Schools of Broome County. Bucci has worked to strengthen that, including inviting area priests to say Mass and teach classes. “We maintain the foundation of who we are in teaching and living the Catholic faith,” he said.

With all his enthusiasm, it seems hard to tell that Bucci will retire on June 30. He turned over the duties of S-C-C principal to Matthew Martinkovic in November of 2015. And on July 1, Elizabeth Carter becomes president of the Catholic Schools of Broome County. Bucci notes he’ll be just a phone call away if needed.

“I have a great love for Binghamton and the Southern Tier and it would be very difficult to leave it. Even in retirement I’m going to try to find ways to be involved and try to make a positive difference in the community.”