Brothers’ state-champs banner gets an upgrade! 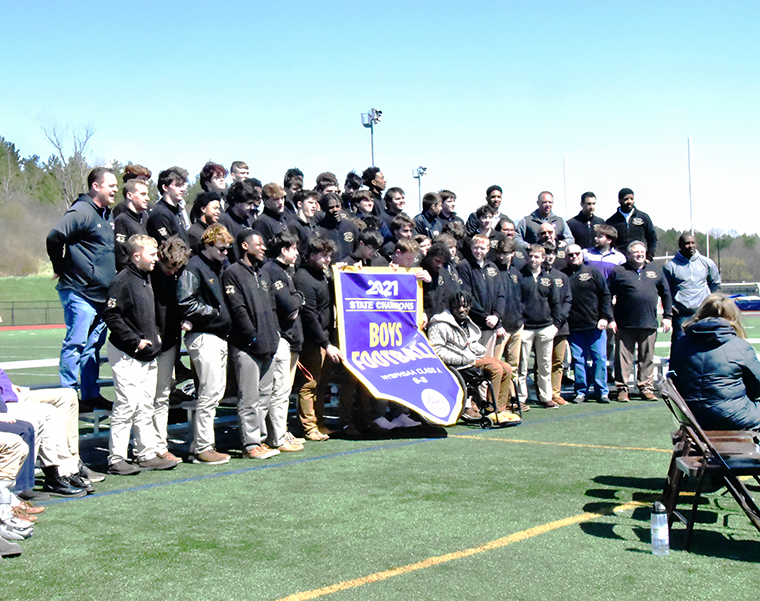 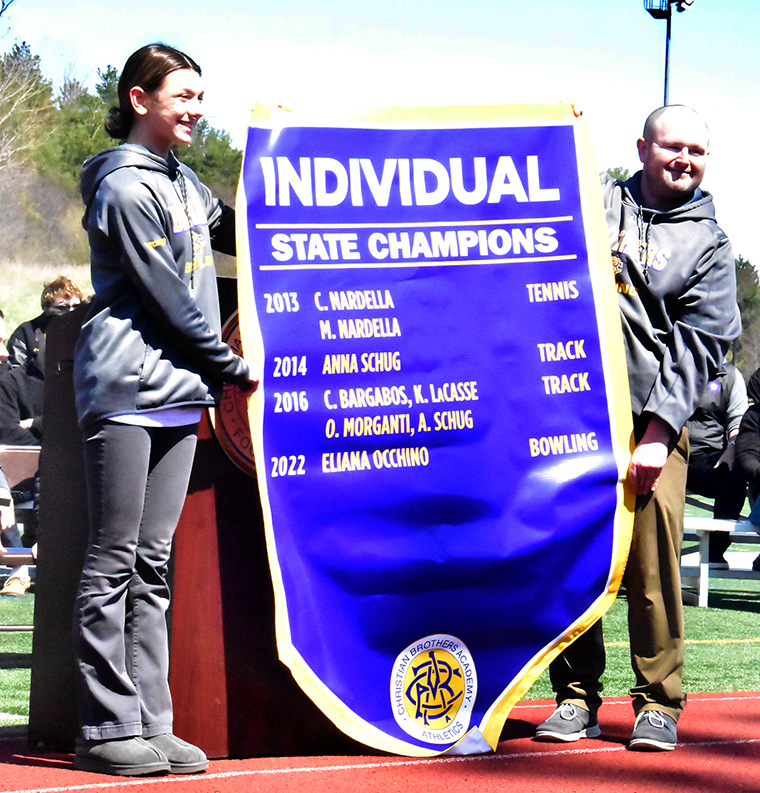 CBA freshman Eliana Occhino had the highest average on the Section III all-star bowling team that won the state title. She holds the banner with CBA Bowling Coach Colin Conroy.

Titlists in football, bowling add their names to list of CBA greats

The fan base is huge. And the teams justify it.

At Christian Brothers Academy, the buzz from the grandstand was audible April 20 in the farthest parking lot before the event even started. Earned in December and March, CBA’s state championships still echoed.

Amid the whooping at breezy Alibrandi Stadium, where banners flapped against the efforts of their proud holders, the Brothers staged a State Championship Recognition Ceremony during which they accepted a proclamation for CBA State Champion Athletes Day in Onondaga County.

“Dear Lord, we pray today for our young athletes who through sports develop important values,” CBA Principal Debra Brillante said. She spoke of loyalty, perseverance, friendship, sharing and sportsmanship. And she prayed that all who compete be enriched by God’s presence in their lives.

“Since state championships were resurrected in some sports in the mid-’70s and then gradually increased into over 20 championships that are competed for today, of the thousands of individual athletes and nearly 1,000 teams that have represented CBA during that period, only 27 individuals and 13 teams were crowned state champions,” Brothers Director of Athletics Buddy Wleklinski told the crowd. “This year, we can add another individual and team to that total.”

The Brothers’ football team won the state Class A championship Dec. 3 in the Carrier Dome. “As expected,” recalled AD Wleklinski, “the turnout was tremendous; it was a great showing of our student body, of our alumni and friends. It provided an uplifting sense of pride for our entire community.”

‘Best is yet to come’

In addition to the football team’s state championship, CBA freshman Eliana Occhino had the highest average on the Section III all-star bowling team that won the state title. Her 236.1 average this year is the highest for any female bowler in the entire country, said her coach, Colin Conroy, and the third-highest average of all time. “Remember, ladies and gentlemen,” he told everyone in the bleachers, “Eliana is only in ninth grade; the best is yet to come.”

Also, the school was among those honored by the New York State Public High School Athletic Association for its varsity teams’ academics. “To qualify as a Scholar-Athlete team,” the NYSPHSAA said in a release, “the team’s grade point average (GPA) for 75% of the roster must be greater than or equal to 90.00.”

“If all of the school’s varsity teams earn the award, the school is declared a School of Distinction, said AD Wleklinski. “Last year, CBA was one of only four of the 108 schools in Section III that earned that designation. Considering the challenges we faced last year [with the pandemic], you should be proud, and very proud, because it took hard work, not only of the students, but the diligence of the faculty to help us earn this prestigious honor. …

“I’m proud to say that we are on track to earn that distinction again. So far … all of our fall and winter sports teams have qualified for Scholar-Athlete team awards. … Anyone that was a member of one of our fall or winter varsity sports teams, please stand up, and let’s give them a round of applause for their accomplishment.”

AD Wleklinski, who is also the longtime boys varsity basketball coach, remembered that when all was shut down due to COVID-19 in the spring of 2020, CBA’s boys and girls basketball teams were preparing to participate in the quarterfinals of the state tournament. Unfortunately, those never took place, he noted, and last year all state tournaments were canceled.

Senior Dan Anderson played for the Brothers’ basketball team and also for the state-championship football team. Asked whether the state football title made up for the discontinued 2020 hoop season, he said: “Yeah, I think so. It was terrible that our season got cut short, but this one was definitely one to remember and … made up for that. … It was definitely a cool experience. … I think it’s something we’ll always remember and something we’ll always look back on and want to keep winning like that.” He will play lacrosse next year for the University of Denver.

CBA’s football team defeated previously unbeaten Somers, of Westchester County, 32-31 to win the state title. CBA defender Jason Brunson, a sophomore, saved the game by intercepting a two-point-conversion attempt with little time left. Asked if he was shocked when he saw the ball coming toward him in the end zone, he said: “It was very rare. I didn’t think it was going to happen at all.” He had thought that maybe he would have to bat the ball down, but he caught it.

Asked why they thought they could beat an undefeated team, QB Rae said the Brothers knew “towards the end of the season that our team was finally coming together, we were playing together as a team. We would hang out a lot outside of practices and stuff, and we felt confident ’cause … games leading up to it, we know we played well …, just had to keep it going.”

After the first drive against Somers, Rae said, “we really got the hang of what we were doing the rest of the game.”

There was not enough time to list all the accolades that bowler Eliana has earned, Coach Conroy said. Recently, she bowled an 800 series twice in two days.

Some bowlers release the ball with two hands, but Eliana is a righty one-hander. Her mental approach, she said, is “I just like to have fun. … If I think less I tend to do better. … I do all my thinking during my practice, so when I get into a match or something it’s muscle memory and I don’t have to think about anything.”

Coach Conroy said, “I think the secret is her work ethic and dedication. … She’s a perfectionist and really works at her craft. … I’d say her technique is what maybe sets her apart. She has enough power, but right now it’s all technique and form.”

Keep it simple and make spares was the recommendation of a bowling commentator on TV recently.

“That’s the most important thing: to make spares,” Eliana said.

“She’s excellent. Excellent,” Coach Conroy said. “You don’t get that average without being excellent at making spares.”

Asked why she loves bowling so much, Eliana said: “I guess you’re always fighting for something, you always try to get a higher score. And that’s my goal: I always try to get the highest score I can, and then it gets addicting. … I’m gonna try to bowl at the highest level I can in college and after college too.”

CBA President Matthew Keough told the student-athletes: “You will continue to be recognized for worldly successes. They are tremendous accomplishments. But if they’re not paired with heavenly success, they mean nothing. …

“At the end of each day ask yourself: Did you make the day better for one of your classmates? Are your friends better people because you’re in their life?”

New York State Sen. John W. Mannion, who taught at CBA in the 1990s, noted that CBA “has a great history of athletics, but more importantly academics.”

Onondaga County Executive J. Ryan McMahon, II, told the student-athletes, “These are moments that you will probably talk about the rest of your lives.”

Dan Anderson, the senior star in multiple sports for the Brothers, was asked if the football team can win another state title next year without him.

“Yeah, I think so,” he said. “I know these guys, they work harder than anyone.”