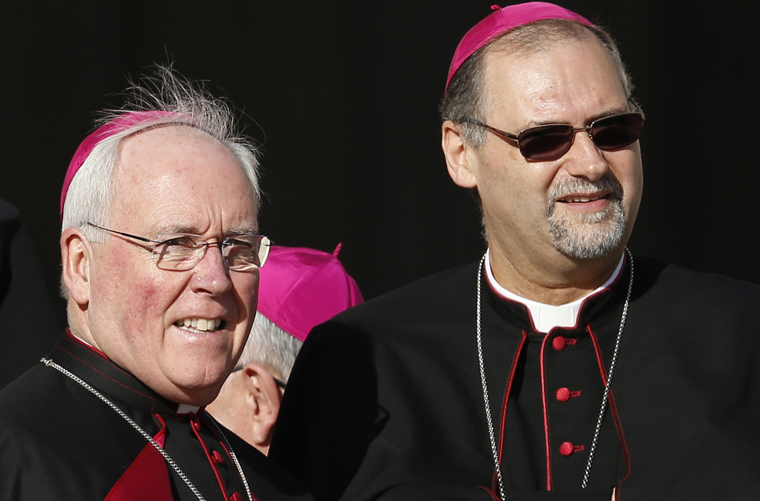 BUFFALO, N.Y. (CNS) — In a pair of statements issued April 11, the Diocese of Buffalo both asserted greater transparency in its handling of clergy sex abuse claims and urged respect for the privacy of abuse victims.

The former statement, from Bishop Richard J. Malone of Buffalo, was issued to “correct some of those errors” about the diocese’s response to the crisis that had cropped up from the “intense media coverage.”

But he also used the statement to address “the times when I personally have fallen short. I deeply regret and apologize for having signed those letters in support of Father Art Smith,” a diocesan priest whom Bishop Malone had endorsed for a job as a cruise ship chaplain despite complaints by three young men to the diocese in 2011 and 2013 about inappropriate touching and unwanted attention and Facebook messages from the priest.

“I also regret not being more transparent about claims involving abuse against adults,” Bishop Malone added. “As you know from the manner in which we have been addressing more recent claims involving conduct between adults, we are handling those matters differently now. Lessons have been learned.”

Bishop Malone said of the 191 abuse complaints received in “the last audit year” — each U.S. diocese undergoes an annual audit to monitor its compliance with the U.S. bishops’ “Charter for the Protection of Children and Young People” — “not a single one of those new allegations involved an incident that occurred after 2000,” and that “there have been no substantiated allegations of child sexual abuse against any diocesan priest ordained in the past 30 years.”

The charter has worked, he added, “demonstrated by the fact that there have been very few actual cases of child sexual abuse in our diocese since 2002.”

Moreover, the independent review board process outlined in the charter works, Bishop Malone said. “When adequate information has been obtained, the board will make a recommendation to me about whether or not the claim has been substantiated. No priest with a substantiated claim of child sexual abuse can remain in ministry,” he added.

“My decisions about whether a priest is removed from or returned to ministry are often criticized in the media. Of course, the process needs to be confidential to protect the privacy of all the parties involved, and, as a result, the public may not hear all that went into each decision.”

Bishop Malone said the diocese is making “great strides to increase transparency.” He called an allegation in a Jan. 28 Buffalo News editorial that the diocese has engaged in a “cover-up of the names of the accused” as “simply not true,” and an April 3 charge in the newspaper that he “has refused to provide more information to the public about the depth and scope of clergy sexual abuse of minors in the diocese” as “demonstrably false.”

He also called false one Buffalo television news reporter’s contention that had Buffalo followed the protocols of the Archdiocese of Boston, the list of accused priests’ names would have been “more comprehensive.” Rather, Bishop Malone said, “If Buffalo had followed suit (with Boston), the list released in November would not have included 16 names of (religious) order priests.”

In unveiling its participation in the nationwide “Enough Abuse” campaign, the attorney general’s office in Erie County, which includes Buffalo, noted it receives about 9,000 cases alleging sexual above. “None of those cases involved priests, but the media still should not ignore those facts,” Bishop Malone said. Media outlets report little or nothing about the “Enough Abuse” campaign, he added, “all while providing constant coverage of decades-old clergy sexual abuse cases in Buffalo.”

In a second statement, the Buffalo Diocese asked area media to respect the privacy rights of abuse victims.

It cited one instance in which the attorney for one abuse victim complained about an unnamed reporter who had “suddenly appeared on (a victim’s) doorstep with a large photograph of (the victim’s) abuser. … The (reporter), without consideration or regard for the consequences of his actions on (the victim), capriciously waved the photograph about and told (the victim) that he was following up with priest abuse victims in the Buffalo Diocese. (The reporter) then walked away leaving my client distraught, without support, feeling violated and without the slightest concern for the traumatic consequence his actions had caused.”

“Because of the release of private information to the media has resulted in added injury to some of the very people who are reporting abuse, the diocese is asking all members of the media to please respect the privacy and confidentiality of persons who have come forward to report abuse,” the diocesan statement said.

The “private information” is a reference to documents leaked last summer by a former secretary to Bishop Malone that indicated the number of Buffalo priests credibly accused of abuse was nearly triple the number the diocese had been reporting. The diocese has said coverage on the leaked documents, including a “60 Minutes” story at the time, was “incomplete, out of context and in some cases plainly inaccurate.”

Charlie Specht, a reporter for WKBW in Buffalo, told Catholic News Service April 12 he is the reporter being referred to in the diocesan statement asking

media to respect victims’ privacy. He said the diocesan account is “so mischaracterized” and describes “totally egregious behavior” in which he would not engage. Specht added he recorded the complete interview with the victim in question, and “what they’re saying happened, did not happen.”