Butterflies of love for Layla 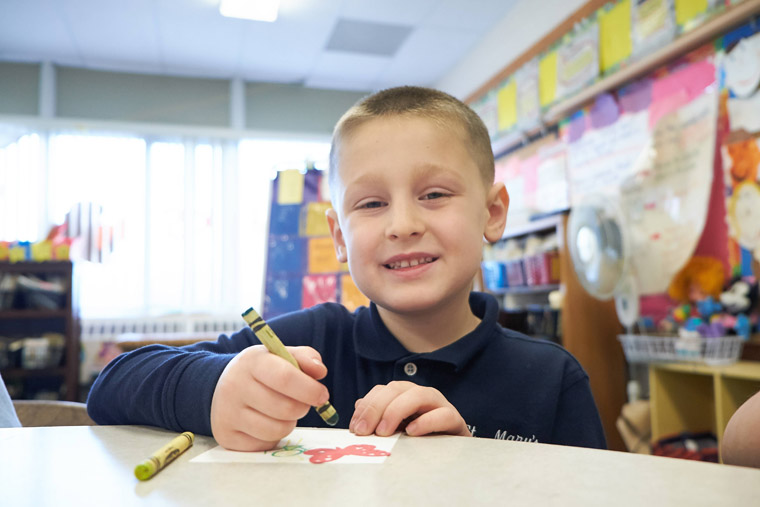 Second grade student Mario Citra, 7; first grade student, Nora Cass, 6; and kindergartener Luke Locke, 5, from St. Mary’s Academy in Baldwinsville have never met Layla Hughes, but they think about her and pray for her daily. The 18-month old toddler is suffering from a variety of medical issues and is currently in the hospital awaiting a liver transplant.

“She’s very, very, very sick,” explained Mario. “The whole school is trying to help her. We’re coloring ‘Get Well’ cards in class to make her feel better. It’s easy to color and this way we won’t be sitting around doing nothing — we’re helping.”

The students are doing more than just coloring cards; they are raising money for Layla and her family as part of a school-wide monthly service project.

“Our students work on service projects each month, but projects like this one, that involves a child who is sick or in need, really hits home for them,” explained Principal Renae Henderson.

Mario nodded in agreement. “We are always doing things to help people. We bring in food for people who don’t have any or help make things for people who are sick or even give someone a turn in a game if they haven’t had one in a long time. We all like helping.”

Layla’s condition originally was brought to Henderson’s attention by her daughter, who lives across the street from Layla’s grandparents in the Strathmore area of Syracuse.

“My daughter is friends with Layla’s grandparents and found out she had to be taken to Golisano Children’s hospital in Rochester. The doctors have run many tests but they can’t figure out what’s wrong with her and now her organs are beginning to shut down. She’s currently waiting for a liver transplant and is going to be moved soon to a hospital in Philadelphia. The medical bills for the family are mounting up and we thought having the children create cards and raise money for the family would offer support, and be a good service project for them as well. The students have been collecting donations and are also selling bracelets that say, ‘We Support Layla.’ They have currently raised almost $1,000. After Thanksgiving, Layla’s grandparents will come to the school and the students will present them with a check, the cards, and a special gift for Layla,” explained Henderson.

“Her grandparents are going to be really excited when they see all the cards we made,” said Mario.

Nora reaches across the table for a blue crayon and draws several bright flowers and hearts on her card. “I think she likes flowers. I’m drawing a lot of them because I want her to feel better.”

Luke, hard at work drawing on his card, nods in agreement. “I’m drawing hearts and a sun on my card. That makes me happy, and maybe it will make her happy too, and then she’ll get better.”