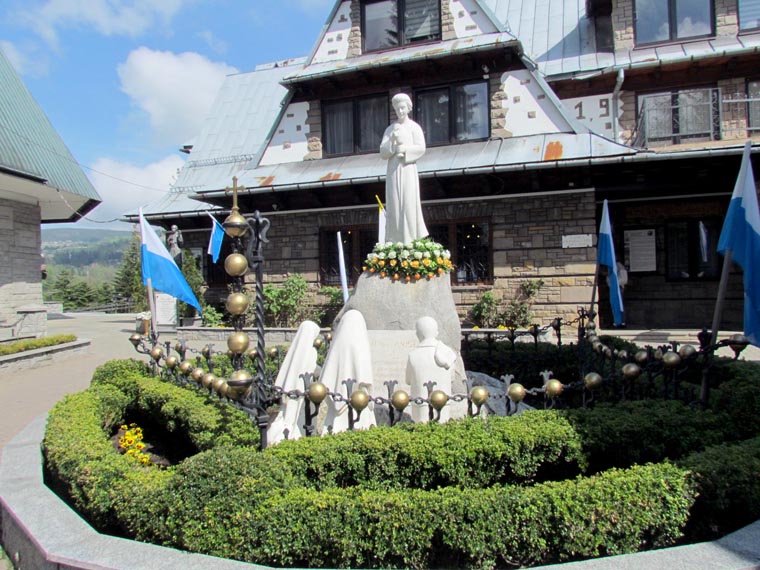 They explore their heritage on a pilgrimage with Father Jozef.

How would you like to go to Poland? In our church bulletin at Holy Family in Syracuse was the blurb “Fr. Jozef Mucha, our former parochial vicar, is planning a pilgrimage to Poland from May 15-26, 2017. Tour stops will include Warsaw, Krakow, and Budapest.” Since my husband, Fran, and I are both 50 percent Polish, we decided to explore our Polish heritage on this trip.

There were 16 other pilgrims: Dolores Grace from Holy Family; Mike and Karen Holy from Liverpool; Susan and Steven Guy from Watertown (our trip directors); Karen Bendix and Irene Busler from Sackets Harbor; John and Linda Nixon from Hammond, N.Y.; Michaelene and Rick Geiser from Massena, N.Y.; Brian Skipka from Huevelton, N.Y.; Bridgid Bartkiewicz from Massachusetts; and Wanda Norge and Norman and Denise Farrar from Colorado. We visited at least 17 churches, four castles, five museums, several market squares, parks, and many other tourist spots.

One of many highlights was visiting Our Lady of Fatima Sanctuary in Zakopane. Built in 1987, the church was consecrated by Pope John Paul II in 1997 during his pilgrimage to Poland and now commemorates his death in 2005. Two sites in Krakow memorialize St. John Paul II — the Sanctuary of Divine Mercy Center, which houses the remains of St. Faustina, and the St. John Paul II Sanctuary.

In St. John Paul II’s birthplace of Wadowice is a historic house museum dedicated to his life and his work in Poland. Father Jozef concelebrated an English Mass with a priest from Chicago in the Black Madonna Sanctuary in Czestochowa for us. He celebrated another English Mass in a newly built chapel in the Underground Salt Mine in Wieliczka, where we walked 800 steps down, three levels deep, to see attractions including dozens of statues, carvings, and chapels carved out of rock salt.

In his home church in Rzeszow, Father Jozef concelebrated a Polish Mass. The church was filled to capacity that Tuesday during “White Week” with the First Communion kids, their families, and our group. All were responding and singing joyfully in Polish to celebrate a whole week of those children receiving their First Communion.

Visiting Auschwitz had to be one of our most moving experiences ever. Knowing that over 900,000 Jewish people died either by the pesticide Zyklon B, starvation, disease, or medical experiments is just not imaginable. To gather more knowledge of this atrocity, we watched several movies on the bus about the Holocaust and visited The Warsaw Uprising Museum; the POLIN Museum of the History of Polish Jews, presenting a 1,000-year history; and the Ulma Family Museum of Poles Saving Jews in World War II.

Other points of interest included the following:

• Warsaw — the Palace of Culture and Science; Lazienki Park, which is dedicated to Chopin; and Old Town Market Place

• Czestochowa — a tour of the Black Madonna Sanctuary with Father Simon, former prior in Doylestown, Pa., with his very good jokes

• Zakopane, a skiing, hiking, and vacation resort in the picturesque Tatra Mountains that border Slovakia and the Czech Republic where we had a horse and wagon ride and hike to Eye of the Sea Lake

• Rzeszow — Lancut Castle where we donned slippers over our shoes to take a tour of the most elegantly furnished castle we’ve ever seen, with every room adorned with magnificent dried flower arrangements

• Budapest — a beautiful ride on the Danube at sunset after a walking tour to see the “Shoes on the Danube” embankment, honoring the people (mainly Budapest Jews) who were killed during World War II; and a final shopping trip at the WestEnd City Center, similar to the Broadway Market in Buffalo

• The Polish Krakusy Folk Group as well as Hungarian musicians and dancers that entertained us during our memory-laden pilgrimage.

Father Jozef, who was born in Poland, spent 18 months at Holy Family starting in 2009 and three years at Christ Our Light Church in Pulaski, N.Y. He moved back to Poland in 2012. His home diocese, Rzeszow, was established in 1992 and is home to more than 500 priests and 49 new churches. The 42-year-old Polish priest has led at least four pilgrimages in the last several years.

Each year, the priest invites those on the tour to let him know if there are special areas they want to visit or places where their ancestors lived. One member of our group, Steven Guy, visited his ancestors’ birthplace in Sekowa where a church administrator opened the doors for us at the Church of St. Philip and St. James the Apostles. The church was built in the beginning of the 16th century, one of the six Wooden Churches of Southern Little Poland, inscribed on the UNESCO list of World Heritage Sites since 2003.

Overall, our group believes this was the best pilgrimage yet to Poland and will be forever in our heart and soul!

Pam Stepien is the circulation and office coordinator for the Sun. Her husband, Fran, is a retired Syracuse fire lieutenant.