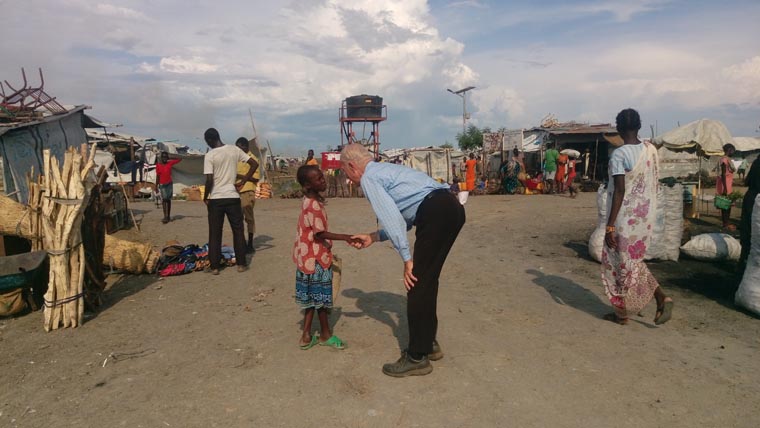 As he serves the people, Father Bassano also takes note of nature

Father Bassano grew up in Binghamton and was ordained a priest for the Diocese of Syracuse in 1975. He eventually became a Maryknoll missionary, and since 2013 he has served as the Catholic chaplain in the United Nations’ “protection of civilians (POC)” camp outside the town of Malakal in northeastern South Sudan, a country that he said was going to have a “peace celebration” involving opposition leaders and the government Oct. 30. The country in the past has struggled with civil war, but he said, “We are quiet throughout the country.”

Father Bassano had been on home leave this past summer recovering from kidney-stone surgery. He called the Sun Oct. 26 saying that he was heading for a meeting. “I’m feeling good,” he said. “I’m in good health.” He said the air temperature was close to 89 or 90 degrees. He has been drinking a lot of water and making sure he eats well enough because he does a lot of walking.

“We are going into the cool season,” he said, with nice cool mornings expected in November and December. The rainy season is over.

Father Bassano has spoken about the hunger in the camp, where the people live in close quarters, mostly in tents. Recently, Father Bassano picked up 719 bags of rice that the Maryknollers supplied. He said the rice will be distributed in the camp.

Father Bassano’s duties include officiating at church services, visiting hospital patients, and checking on the people’s needs. At nighttime, he sleeps in his tent.

In the past week there were services for some people who had died. Upcoming, he said, is a workshop for women about being peacemakers. He is excited about the recent formation of an interreligious council for the 20 churches and the two mosques in the POC camp, along with the 13 churches, two mosques, and Jewish synagogue in the nearby town of Malakal. “This is good news,” Father Bassano said. The council will work to “heal broken relationships” and to find peace, he said.

On Oct. 27, Father Bassano was planning to give a talk on forgiveness at a Christian-churches workshop. He also meets with the camp’s youth drama group, which puts on shows about life in the camp.

Last week he wrote to the Sun: “I receive inspiration from looking at God’s creation and so this story [titled “Masterpiece,” below] came. Things are quiet here as we pray for lasting peace in South Sudan.”

There is a beautiful bird whose name is unknown to me. It is found in the bushes at our United Nations camp in Malakal. Both the head and chest are black while the rest of the body of this unique bird is a bright shining red color. In my daily walking, I stop to notice and observe the bird. Other people who are passing by wonder why I am looking in the bushes. My response is that there is a beautiful bird there whom I am greeting. They smile or laugh as if I am wasting my time on silly things. But my heart gives thanks to God for the gift of creation that is surrounding us each day. I give a warm morning greeting to the bird who appears to me in splendor.

All of creation speaks and is full of the glory of God. On seeing this special bird there is a recognition that everything around me is a precious gift of God and a masterpiece to behold.