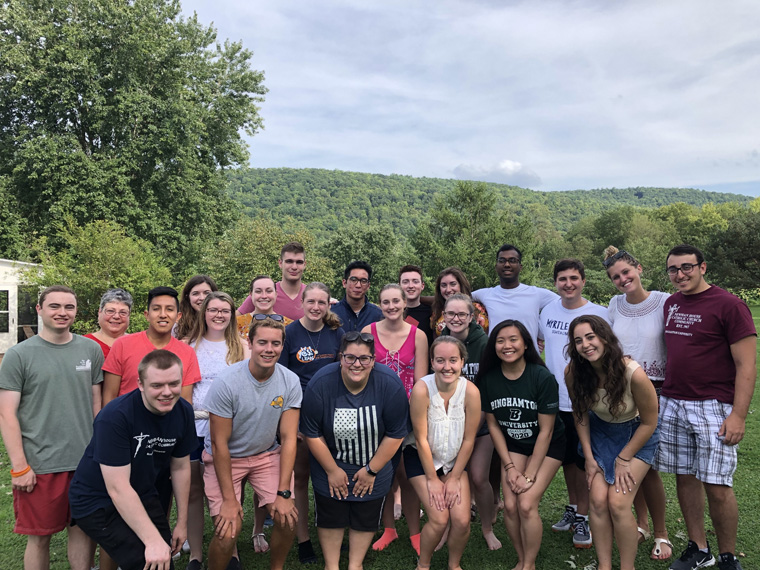 Students continue a college tradition  that started in 1883

It’s a vintage way of life for college students.

Adhering to a 136-year-old concept, students who belong to campus ministries attend Masses and engage in activities that might include studying the Bible; watching Bishop Robert Barron’s Catholicism course over a period of 10 weeks; attending retreats, days of recollection, evenings of prayer, and adoration; working with high school students at Confirmation retreats; and working in significant social-justice endeavors such as off-campus food banks.

“This is a dynamic, fun time of year on campus as students begin to respond for their academic year,” said Msgr. James Lang, diocesan director of the Newman Centers under the aegis of Campus Ministries.

He added: “One of the many points of Vatican II was that the Church is active in the midst of the community.”

“The whole structure of campus ministry,” he said, “is built around a) the students and b) the document by the bishops called ‘Empowered by the Spirit.’”

That document by the U.S. Conference of Catholic Bishops discusses the Newman Movement in the United States:

“This ministry began in 1883 at the University of Wisconsin with the founding, through lay initiative, of the Melvin Club which was designed to keep Catholics on campus in touch with their religious heritage. A decade later the first Newman Club was established at the University of Pennsylvania, with much the same purpose.

“It was named after John Henry Cardinal Newman, who was the English leader in the nineteenth-century intellectual renewal in the Church and later was chosen the great patron of campus ministers in our country. During this initial stage, farsighted leaders recognized that the growing number of Catholic collegians attending public institutions needed support and instruction in their religious heritage. They responded by establishing clubs for Catholic students, with their own chaplains and residence halls.”

“The year has started,” Msgr. Lang said, “and when students arrive they come full of new expectations. They are well rested, they’re sharing the stories of the summer. …

Campus ministry, he said, is “incarnational theology”: “If you’re going to be present to people you have to be in the midst of them, and our campus ministers do an outstanding job of being present to students and academic communities.”

Msgr. Lang noted that the so-called “school year” is actually a compressed several months in college. For example, the early part of the semester includes days off for Labor Day and Rosh Hashana, so it can be a month in before a campus ministry has its entire complement of students fully functioning. The campus ministers must greet students and make sure that events are adequately advertised.

“And then, of course, after Thanksgiving, the focus goes to finals and final papers,” Msgr. Lang said, and so the bulk of the programming happens in a relatively limited period of time.

Very shortly, Msgr. Lang said, a new director of campus ministry at Cortland will be named. Also, Father Jason Hage is working to develop a campus ministry at SUNY Morrisville, and Msgr. Lang’s office has been in contact with “wonderful people at Cazenovia College” for the same purpose. 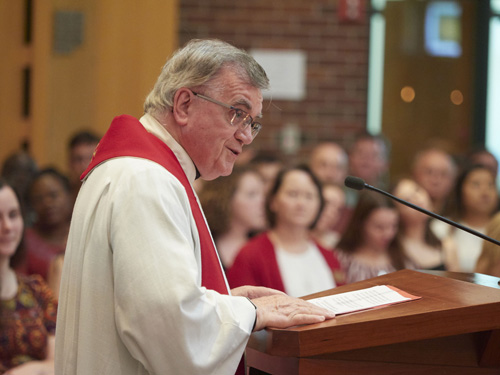 And he is looking forward to the diocese’s second-year relationship with a group called the Newman Connection. He said high school seniors go into colleges and meet the campus ministries, which then can welcome people directly to campus and get them involved in their own college communities.

Every Thursday during the academic year at the Syracuse University Catholic Center is community night with Mass at 7 followed by dinner at 7:30, according to Jeremiah Deep, SU’s Catholic campus minister.

In an email, he said the first Mass/dinner of the semester was set for Aug. 29 with a welcome-back barbecue on the front lawn of the Catholic Center.

He said students were treated to delicious pulled pork, mac-’n’-cheese, coleslaw, caesar salad, watermelon and ice cream, and “a lot of fun and games.”

“Since 2018,” Deep said, “our ministry has partnered with Evangelical Catholic, a national organization based in Madison, Wisconsin, that is dedicated to forming disciples and training leaders. Our partnership has allowed us to form and train many of our student leaders who will lead and facilitate small Bible-study groups throughout campus. We co-facilitated a leadership retreat with members from Evangelical Catholic” on Aug. 24.

Aug. 20: Sister Rose took 23 of the NH leaders on retreat at the Spiritual Center in Windsor, in the Catskills. They spent the day reacquainting themselves with each other and attending workshops on leadership and other events.

Sept. 1: Welcome barbecue after Mass with a general-information meeting.

“Our goal this year is to start having small faith groups for sharing Sunday reading,” Sister Rose said. 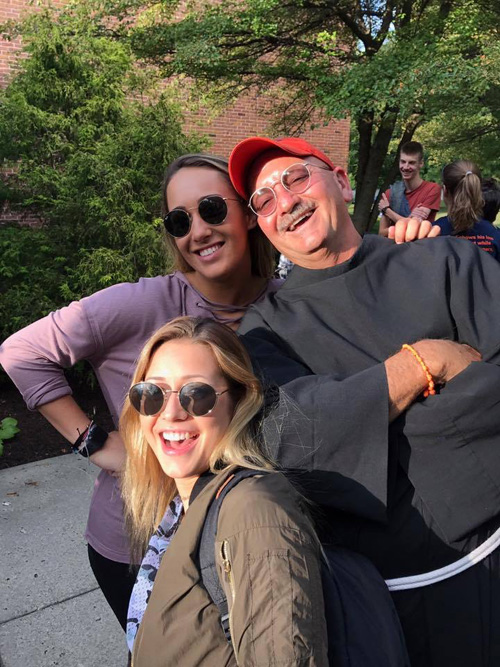 Campus Ministry Explore Program:    Twenty-seven incoming first-year students come to campus a week before the official move-in day. With the help of 12 veteran Explorer team leaders, the new Explorers engage in five days of reflection, service, community building, sharing of faith, and prayer with the goal of providing a solid foundation in body, mind, and spirit as they begin their time at Le Moyne.

With the week’s activities grounded in the Ignatian pillars of finding God in all things, the program concludes with a day of retreat at the Jesuit Villa on Cazenovia.

Following the Aug. 23 move-in day and the weekend orientation program for new students, both commuting students and residential students attended the Aug. 25 Mass on the Grass outside the Chapel.

Aug. 28: The annual Mass of the Holy Spirit, celebrated by Bishop Douglas Lucia, Father Donald Kirby, S.J.,  Jesuit Community Rector, and Jesuit faculty concelebrants, with music ministry by the All College Choir, followed by the annual opening of school barbecue picnic on the Falcone Library and Student Center lawns.

Leaders from the student community are in place for programs throughout the year including weekend retreats. Also planned are service-immersion trips both domestic (Camden, N.J.; Erie, Pa.; New Mexico) and international (this year, El Salvador, Jamaica, Ecuador).

Other events include faith-formation activities such as Adult Confirmation Preparation, weekly adoration of the Holy Eucharist, as well as continuing the tradition of Sunday Eucharist, with the support of the students’ Joyful Noise Liturgical  Choir.

The local volunteer-service focus continues to be outreach to people or are homeless, and those at risk of homelessness, through collaboration with Road to Emmaus Ministry and weekly Saturday commitment to cover the serving of late-afternoon dinner at the Rescue Mission Dining Center.

Father Dolan said that he and Le Moyne’s other campus ministers — Director Tom Andino, Alice Zicari, and Sister Ann Kenyon, OSF — “are excited and hopeful for a Spirit-filled year on campus, and our sharing of that Spirit with our brothers and sisters whom we encounter on and off campus.”