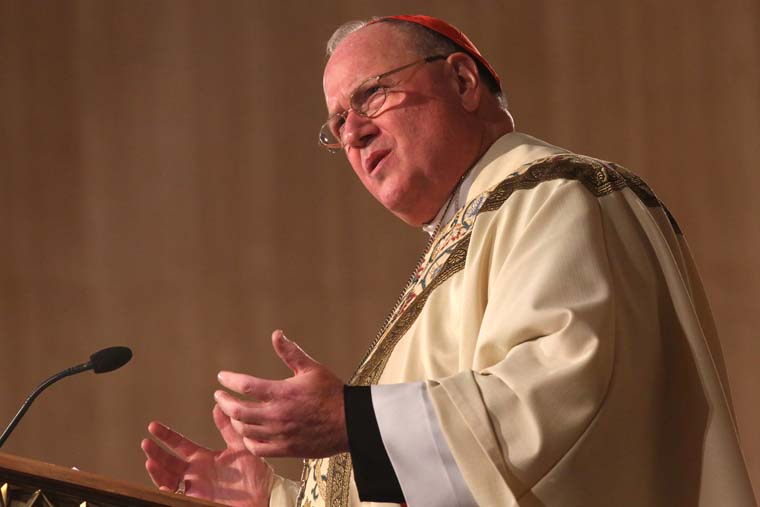 WASHINGTON (CNS) — The chairman of the U.S. bishops’ Committee on Pro-Life Activities said March 20 that he prayed the Supreme Court would “do the right thing and uphold our fundamental right to free speech” when it decides a case examining freedom of speech at crisis pregnancy centers.

“Pro-life pregnancy care centers embody everything that is right and good in our nation: generosity, compassion and love that is offered to support both mother and child,” said Cardinal Timothy M. Dolan of New York in a statement issued the same day the high court heard oral arguments in NIFLA v. Becerra.

The cardinal said that some government officials, instead of “applauding and encouraging the selfless and life-affirming work of these centers,” want to “force them to provide free advertising for the violent act of abortion in direct violation of their pro-life convictions and the First Amendment.”

The case before the Supreme Court will consider if a California law that went into effect in 2016 violates the U.S. Constitution by requiring the state’s 200 crisis pregnancy centers to inform their clients, in specific detail, about the availability of free or low-cost abortion and contraceptive services and provide a referral number for them.

The law in question, called the Reproductive FACT Act, says centers must post such notices in areas where they will be clearly seen on paper that is “at least 8.5 inches by 11 inches and written in no less than 22-point type.” Centers also are required to disclose in their advertisements if they have medical personnel on staff. Some centers provide counseling and offer supplies of diapers, formula, clothes, and baby items. Centers that fail to comply are subject to fines of $500 for a first offense and $1,000 for subsequent offenses.

Three pregnancy centers challenged the law in court saying it infringed on their First Amendment rights to freedom of speech and free exercise of religion.

The pregnancy center law was upheld last October by a panel of the U.S. Court of Appeals for the 9th Circuit that said the state could regulate professional speech because of its interest in safeguarding public health and to ensure that “citizens have access to and adequate information about constitutionally protected medical services like abortion.”

It also said the required signs were simply to inform clients of the existence of these services and did not encourage or suggest that clients should use them. Last October, a California Superior Court judge granted a permanent injunction against the state attorney general preventing him from enforcing the Reproductive FACT law.

The USCCB and several other groups, including the California Catholic Conference and the Catholic Health Association of the United States, filed a friend-of-the-court brief with the Supreme Court supporting the pro-life pregnancy centers in NIFLA v. Becerra. “NIFLA” is the National Institute of Family & Life Advocates; “Becerra” is California Attorney General Xavier Becerra.