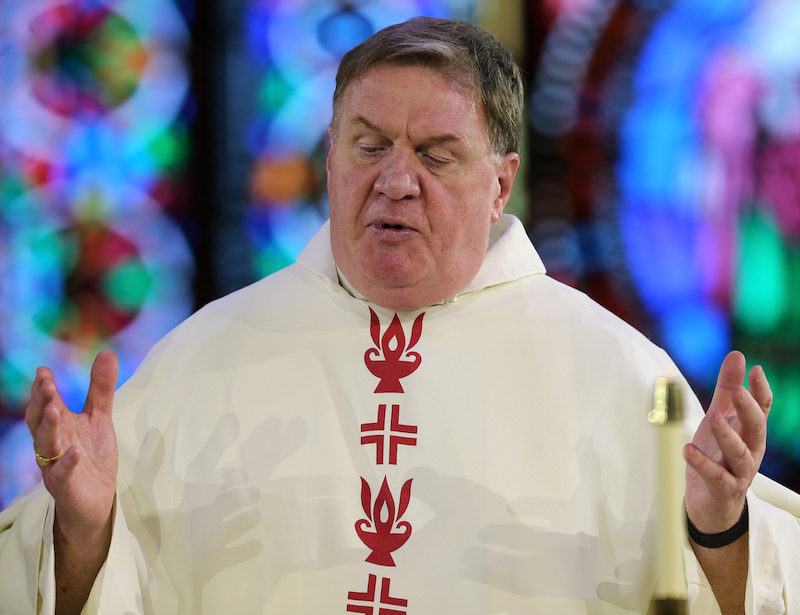 Cardinal Joseph W. Tobin of Newark, N.J., prays as he concelebrates Mass during the 2017 Convocation of Catholic Leaders in Orlando, Fla. In a Feb. 20 reflection on his hopes for the Vatican’s summit on clergy sex abuse, he said the church needs “another ‘Nostra Aetate’ moment,” referring to the Second Vatican Council and how the church then, like today, “needed to proclaim prophetically and apply more urgently what the Gospel offers.” (CNS photo | Bob Roller)

NEWARK, N.J. (CNS) — When asked his hopes for the Vatican’s summit on clergy sex abuse, “the answer for me is unmistakable,” Cardinal Joseph W. Tobin of Newark said. “What the church needs really needs is another ‘Nostra Aetate’ moment.”

From that would come increased dialogue and synodality within the church, and greater lay participation, Cardinal Tobin added in a reflection, “The Power of Listening to the Peripheries,” posted Feb. 20 on the archdiocesan website, www.rcan.org.

“Nostra Aetate” is the Second Vatican Council’s 1965 Declaration on the Relationship of the Church to Non-Christian Religions.

The cardinal described the backdrop against which this document was developed.

“As bishops from around the globe gather with Pope Francis, they do so against a backdrop of soul trauma for the body of Christ,” Cardinal Tobin said about the Feb. 21-24 summit. “And while this moment is in many ways unprecedented in the life of the church, we can still learn from echoes of the past.”

At the opening of Vatican II in 1962, he said, “the bishops in the room all had one thing in common: They all had, in some way or another, survived World War II,” a conflict that “claimed 60 million lives — 3 percent of the world population — and left Europe devastated” and “had seen nuclear weapons deployed in war for the first and — God willing — only time.”

The “most devastating trauma” was the Holocaust, the Nazis’ “systematic, industrialized and institutionalized murder of over 6 million Jewish people,” he said.

In the aftermath of the war, the church “needed to proclaim prophetically and apply more urgently what the Gospel offers,” he explained.

What took place during the Vatican II was “a revolutionary flourishing of a church of synodality, that is, one whose members move together with Christ, along a path guided by the Holy Spirit,” Cardinal Tobin said. “I hope we will see this again at the abuse summit.”

He gave the background of what he called “the original ‘Nostra Aetate’ moment: a 1960 meeting between French Jewish historian Jules Isaac and St. John XXIII during which Isaac hoped Vatican II “would provide an opportunity for a course correction, to stave off the possibility of the horrors of the Holocaust ever recurring.”

Isaac shared with St. John his research on “the roots of Christian anti-Semitism and how the church, while never proclaiming them as articles of faith, had nonetheless proliferated a toxic ‘teaching of contempt’ toward the Jewish people that metastasized through the centuries and directly enabled the Holocaust,” Cardinal Tobin said.

St. John did not live to see “Nostra Aetate,” which was issued in 1965, two years after his death. But it said “the Jews should not be presented as rejected or accursed by God, as if this followed from the Holy Scriptures” and that “displays of anti-Semitism, directed against Jews at any time and by anyone.”

“If Vatican II formally condemned a heresy, this was it,” Cardinal Tobin said.

By then St. Paul VI “injected dialogue into the council discourse. In his landmark 1964 encyclical on the church, ‘Ecclesiam Suam,’ written during Vatican II, he reflected extensively on the need for dialogue as a method for the church moving forward,” Cardinal Tobin said.

“Pope Francis doubled down on that prescription when he addressed the U.S. bishops in Washington during his 2015 visit to the United States: ‘The path ahead, then, is dialogue among yourselves, dialogue in your presbyterates, dialogue with lay persons, dialogue with families, dialogue with society. I cannot ever tire of encouraging you to dialogue fearlessly.'”

Like anti-Semitism that plagued the church, “today the church grapples with another septic wound, one that has also been compounded by the perennial ignoring of the voices of people who have been wounded and pushed aside by the church — whether those sexually victimized as children or as adults,” the cardinal said.

“We are also called to synodality,” he added. “The council fathers envisioned a church with an active laity helping to lead the way,” adding, “A strange blessing of the past year has been the overwhelming evidence that laypeople haven’t given up on the church, but are in fact willing to dig in and be a part of the rebuilding.”

Ideally, Cardinal Tobin said, a synod “strives to include marginalized voices in the calculus of the church’s thinking and decision-making, even at the level of the Vatican.”

Pope Francis, he added, “recognizes the power of this model and has expressed his dissatisfaction with consultation he finds too filtered.”

“He recognizes that bishops should not limit their input to safe voices who are only going to affirm only what we want to hear,” the cardinal continued. “The ultimate fruit of this process is conversion, particularly conversion away from attitudes and behaviors that dehumanize others, whether attitudes towards those outside the church — as with anti-Semitism — actions that harm our most vulnerable people — as with abuse and clericalism — or both.”

Cardinal Tobin observed how, during last October’s Synod on Young People, Pope Francis noted how clericalism “leads us to believe that we belong to a group that has all the answers and no longer needs to listen or learn anything — or it just pretends to listen.” And from this attitude springs so many ills: the inclination to treat laypeople as second-class citizens, the decision to protect not our children but the reputation of the institution.”

The cardinal then quoted someone not often found in pastoral reflections — 20th-century journalist Ben Bradlee — who said: “The truth, no matter how bad, is never as dangerous as a lie in the long run.”

“My prayer is that the next flash of purification experienced by the church will have its fuse lit at this month’s summit,” Cardinal Tobin said, “and that it will be the purging of structures and attitudes that foster clericalism and the abuse of God’s children.”