Carmelite sister cleans up after Irma with a chainsaw, becomes sensation 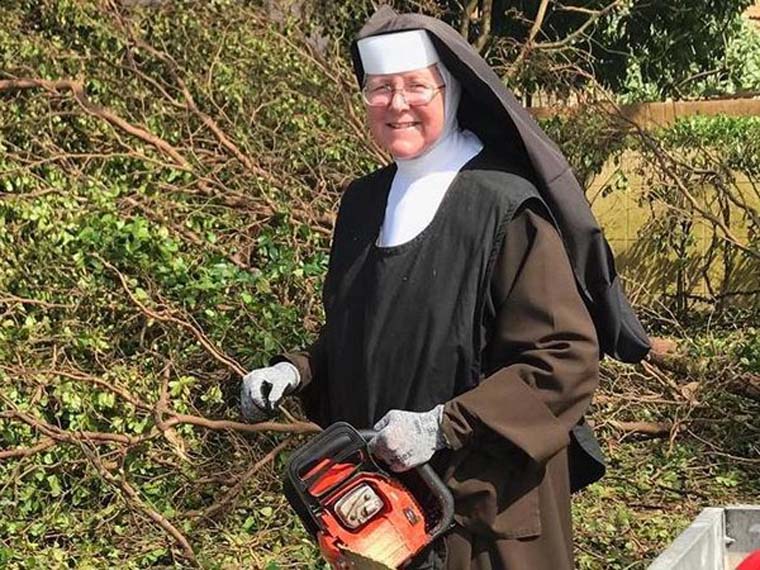 WASHINGTON (CNS) — In the aftermath of Hurricane Irma, Carmelite Sister Margaret Ann Laechelin saw a motorist struggling to navigate a road obstructed by a fallen tree and worried for the safety of others.

“The road was blocked and we couldn’t get through, and I saw somebody spin in the mud and almost go into a wall and off the road, and so there was a need, I had the means, I wanted to help out,” Sister Laechelin explained to CNN Sept. 12 as a video played in the background showing her, wearing the Carmelites’ brown tunic, chopping apart a tree with chainsaw.

Florida’s Miami-Dade Police Department had tweeted the video earlier that day, thanking her — and other Floridians — for helping with cleanup efforts. During her CNN interview, Sister Laechelin said alumni from Archbishop Coleman F. Carroll High School in Miami, where she is the principal, saw her efforts and arrived to help.

Sister Laechelin, of the Carmelite Sisters of the Most Sacred Heart, told CNN that the school had chainsaws stored in a closet and, given the circumstances of the destruction, she put them to use.

“They needed to be used,” she said, during her prime-time cable news interview. “We teach our students, ‘Do what you can to help,’ and so this was an opportunity where I could do something to help and, thanks be to God, I was able to do it.”

The video sent Twitter into a storm of its own about the “chainsaw-wielding nun” cleaning up after Hurricane Irma. Some said she was a symbol of grit, resilience and community spirit.

“Everyone out there pitching in, lending a hand … there’s one in particular,” he sang. “Sister Margaret Ann wielding that chainsaw, chopping up them tree limbs, makes us want to bow down and say ‘Amen.’ Look at you go, Sister. She’s a do-it-herselfer, holy helper, Sister Margaret Ann.”

She was just trying to clean up the road, she said, but also putting action behind what she often tells students: “Do what you can for other people, don’t think of yourselves. And so, that’s what I wanted to do. It’s part of who we are, it’s what we do,” she said.