Cathedral rededication attendees speak of emotion, beauty, and a sense of welcome 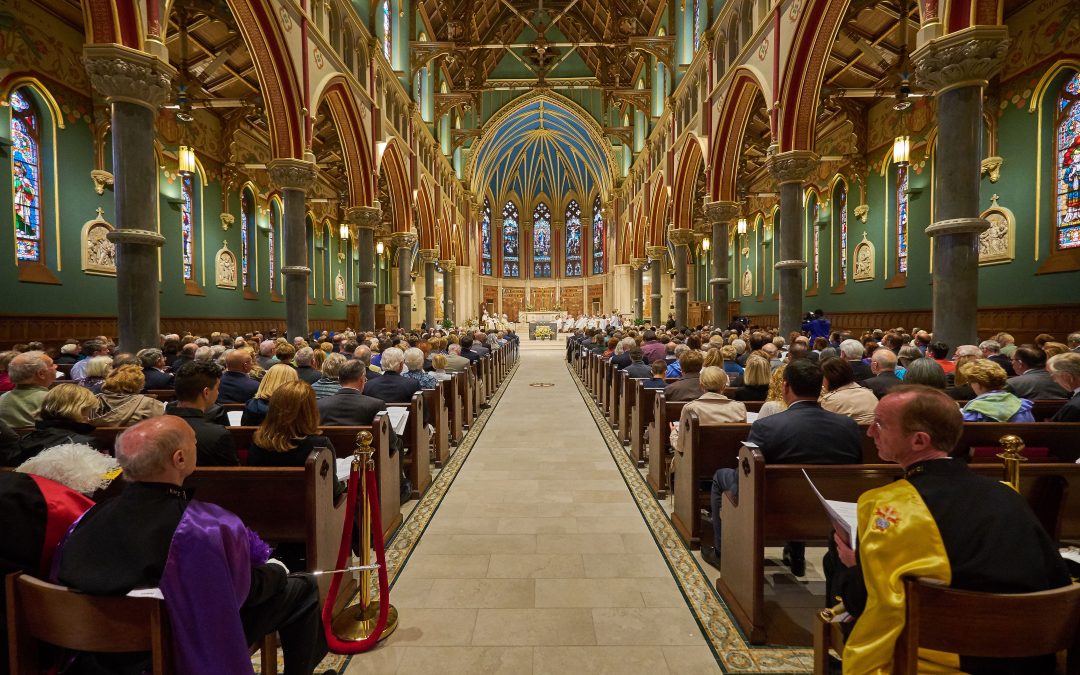 Cardinal Timothy Dolan called it a “booster shot of hope” and one witness even upgraded the feeling to an injection of sunshine.

The Sept. 8 Mass of rededication of the renovated Cathedral of the Immaculate Conception in Syracuse was itself a work of art to several people who attended the Mass.

Attendee Michele Ryan, of St. James Church in Syracuse, said she goes to daily Mass at the Cathedral because she works downtown.

Her favorite impressions of the ceremony included “talking about the relationship between the Nativity of the Blessed Virgin Mary and the fact that we’re celebrating the renovation of the Cathedral of the Immaculate Conception. I think the conjunction of those two themes [was] very inspiring and uplifting.

“And then to walk up this amazing center aisle restored, and receive Holy Communion from the bishop [Robert J. Cunningham] and our cardinal on the side of him, I felt like someone had injected sunshine into my veins. I’m not sure my feet touched the ground from where I received Our Lord on the way back to my pew.”

She said the “angelic choir” that served as the backdrop for her reception of Our Lord “just left me feeling etheric … beyond the mundane earthly presence.”

As for the renovation project, Ryan said, “I was married in this Cathedral 34 years ago, and I think about how it looked then and there used to be candles underneath all of these Stations of the Cross. And they were very dark and hard to see the details of the faces on the Stations.

“My reaction when I first stepped in here, I felt renewed,” McConnell said. “I felt like there was a spark that lit me up, and … I felt very emotional. Then when the music began, again, just very emotional. And everything just glistens, the Stations of the Cross especially stand out so beautifully. Those are the things that captivated me as far as the appearance. I love the tabernacle has been centered again on the altar, just like the bishop said: When you first come in, that’s exactly where the eye is led.”

Of the singing at the Mass, she said: “It was beautiful. Electrifying. It was like … a choir of angels. It was beautiful. And of course, the presence of the cardinal, and to see him come in. My friend Michele commented how he’s a typical Irishman, happy, smiley, he’s such a big guy, you know? And to see him making eye contact with everyone as he walked in with his staff just was representative of [him] and our country.”

Kathy King has a special connection to the Cathedral renovation: Her husband, Ed King, is the facilities manager for the diocese. He was constantly at work on the project, she said.

Speaking after the Mass while the stirring organ music continued playing, Kathy said she hadn’t seen the finished project before she walked in for the Mass.

Of her husband, she said, “He spent a lot of time here. … He likes to see it done right, perfection. I think he’s proud.”

Ed King’s brother Mike, the project manager for the diocese, also worked pretty much 24/7 on the renovation.

Mike gave Kathy a hug and said the project went great: “A lot of support.”

Asked if the reaction to his work and the rededication ceremony were commensurate with all the work that went into it, he said yes.

Mike appreciated that Bishop Cunningham mentioned, in his comments at the end of the Mass, some of his favorite aspects of the repairs. Mike himself appreciates that with the new altar, the tabernacle has been moved back.

Also delighted was Sarah Ioele, chairman of the board for Father Champlin’s Guardian Angel Society.

Cardinal Dolan had spoken of “this jewel of a Cathedral,” and Ioele found the words fitting.

“It’s all just so beautiful: the light and the warmth,” she said, “and I think it highlights the stained glass in a way that you can truly see the rich colors; it’s like jewelry. … It feels like the crown jewel. I would probably describe it now as truly the crown jewel of the diocese.”

Yet, she added, it is “still a very humble home that everyone can feel welcome to enter, and I think that’s important: As beautiful as it is, and as majestic as it is, it is still a humble home where all are welcome.”

Although the ceremony had pomp and circumstance, she said, “at the same time it had a wonderful sense of family about it.”