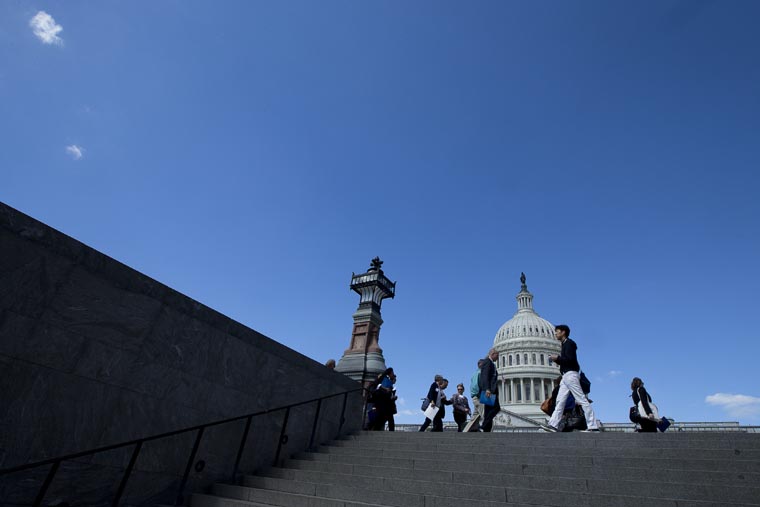 The leaders repeated in interviews with Catholic News Service that a budget is a moral document that reflects the nation’s priorities and that they found that the spending plan revealed May 23 backs away from the country’s historical support for children, the elderly and the poor, and protecting the environment.

Their concern focuses on the deep cuts — totaling $52 billion in fiscal year 2018 and $3.6 trillion over the next decade — in international aid, senior services, health care, hunger prevention, job training, air and water protection, and climate change research. The cuts essentially are paying for a corresponding $52 billion boost in military spending.

Sister Donna Markham, president and CEO of Catholic Charities USA, echoed Bishop Dewane’s contention, saying she was “profoundly disturbed” by the White House plan. “You can’t have people who are suffering and expect them to bring themselves out of poverty when we cut off their access to food and health care and job training. It’s absolutely ridiculous,” she said.

“Clearly, it’s saying where the values are of this administration. And their values do not align with our values as people of faith who are charged with looking out for those among us who are most in need,” Sister Markham added.

But rather than directly engage the White House, officials at the U.S. Conference of Catholic Bishops, Catholic Charities USA, Catholic Relief Services and other agencies are planning to turn to Congress, which they see as a firewall to minimize the depth of the cuts being proposed. They have four months of work before a budget must be in place Sept. 30, the start of the next fiscal year.

Democrats in Congress, as expected, have opposed the change in spending priorities. Many Republicans have as well, describing the plan assembled by Mick Mulvaney, director of the Office of Management and Budget and a Georgetown University graduate, simply as a starting point.

“By just presenting this extreme case, it’s a classic negotiating ploy (to) be as obnoxious and extreme as possible and then move to the middle,” Kepferle said. “It still means devastating cuts to the poor and more money for the rich. It’s a breathtaking transfer of wealth from the poorest of the poor to the wealthy.”

Bishop Richard E. Pates of Des Moines, Iowa, is so concerned about the budget plan that he has undertaken a day of fasting and prayer on the 21st day of each month from now through December 2018 when the current session of Congress ends.

Bishop Pates said the effort, organized by Bread for the World, for which he serves on the board of directors, is a time-honored tradition in the face of injustice. “In addition to the lobbying efforts, we really feel that prayer and fasting and relationship together as a religious community is very important,” he said.

A look at the numbers provides insight into the concern that prompted such action.

Through fiscal year 2027, the budget outline incorporates more than $800 billion in reduced Medicaid spending envisioned in the House-approved American Health Care Act, which is under review in the Senate. The Supplemental Nutrition Assistance Program, formerly known as food stamps, will see $192 billion in reduced spending over the decade.

The Environmental Protection Agency would lose $2.5 billion, about 31 percent of its current budget. Plans call for reducing support for research and development, the Superfund cleanup program and the Office of Enforcement and Compliance Assurance. Funding for international climate change programs would end.

“There’s this sense that if it’s hurting business then it’s a bad regulation,” Misleh said. “I certainly think there are undoubtedly some regulations that can be scaled back or done away with, maybe environmental regulations that outlive their usefulness. But I also think that can’t be the only criteria whether we judge a regulation is good or bad.

Some proposals in the budget have long been sought by Catholic advocates. The fiscal year 2018 plan includes $1.4 billion for charter schools, private schools and other school choice initiatives. Another provision would prohibit funding for any agency that offers abortion services even though federal funds cannot be used for the procedure, as current law requires. If adopted, the proposal would end all federal funding for Planned Parenthood, the nation’s largest abortion provider.

“A great country does not send money to those who kills its children,” Father Frank Pavone, national director of Priests for Life, said in a statement, supporting the budget provision. “It’s appropriate not to force taxpayers to subsidize abortionists and it’s logical to exclude Planned Parenthood from health programs. Abortion is not health care.”

Still, there are overarching concerns about the impact of the budget on people who are least able to fend for themselves.

“Adding money to the military is not going to solve our problems,” said Lawrence Couch, director of the National Advocacy Center of the Sisters of the Good Shepherd in Washington. “In the long run this is untenable. Eventually people will not tolerate that type of situation where they are not at the table.”

Msgr. Kevin Sullivan, executive director of Catholic Charities of the Archdiocese of New York, said cuts in Medicaid funding are particularly troublesome because nearly half of such spending supports senior citizens and disabled people.

“If (the budget is) implemented as proposed I think many people will kind of fall through the cracks,” he said. “I do have a certain hope and confidence as it goes through the legislative process that people will realize that the proposed budget needs significant modification.”

When it comes to international aid, a spokesman for Catholic Relief Services said foreign aid cuts ultimately could affect national security because poverty and desperation would expand. Bill O’Keefe, vice president for government relations and advocacy at the agency, called on Congress to protect nearly $60 billion in diplomacy and development aid.

O’Keefe cited the McGovern-Dole food program as one that has made a difference in the lives of children at a small cost. In a region of Honduras, for example, the program provides 90,000 children with a lunch at school, allowing them to attend classes and reducing the likelihood they will join a violent gang, O’Keefe said.

In the Archdiocese of Oklahoma City, Patrick J. Raglow, executive director of Catholic Charities, predicted people will feel the pinch of reduced services. While the agency does not receive federal funds outside of refugee resettlement and natural disaster services, Raglow expects that it will be counted on to provide broader assistance particularly in rural communities if the proposed budget remains substantially untouched.

He suggested that funding will have to be sought elsewhere to meet existing needs if the cuts go through.

“It means you have to engage the (wider) community differently to sustain the community you’re serving. We have to be faithful to God almighty, not to Uncle Sam almighty,” Raglow said.

“It does mean you have to get off your duff and get out of your office and you’ve got to make some asks,” he added. “Resources are available. You just have to go out and find them. But we shouldn’t sit there and crawl under our desk because of this budget.”