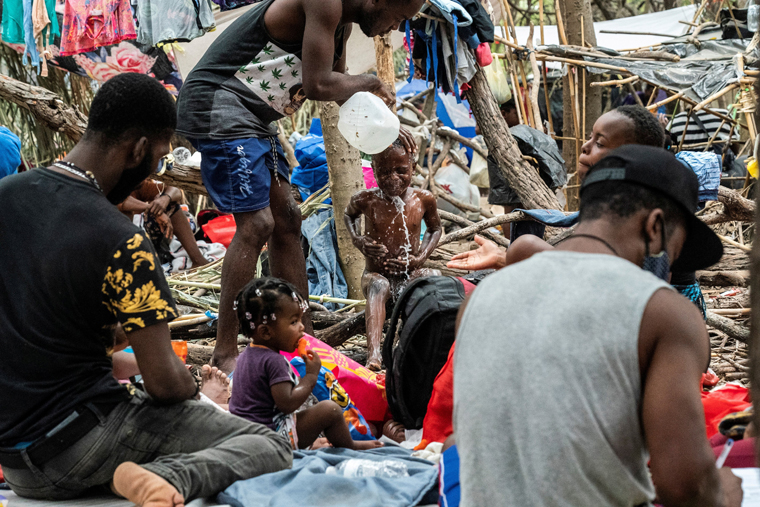 WASHINGTON (CNS) — The chairman of the U.S. bishops’ migration committee and the head of Catholic Charities USA issued a joint statement Sept. 22 urging humane treatment of Haitians and other migrants as their numbers grow in southern Texas at the U.S.-Mexico border.

Thousands of Haitians have made their way across the Rio Grande from Mexico and illegally entered the United States at the Del Rio Sector of the border, roughly 145 miles west of San Antonio.

The Haitians and other migrants have been living under the Del Rio International Bridge awaiting processing, while coping with temperatures exceeding 100 degrees and limited access to food, water and shelter.

“We call on the U.S. government to reassess its treatment of migrants in Del Rio and elsewhere along the U.S.-Mexico border, especially Haitians, who face life-threatening conditions if returned to Haiti and possible discrimination if expelled to third countries,” said Auxiliary Bishop Mario E. Dorsonville of Washington and Dominican Sister Donna Markham.

The bishop is chairman of the U.S. Conference of Catholic Bishops’ Committee on Migration and Sister Markham is president and CEO of Catholic Charities USA.

“As a church at the service of all God’s people, we embrace Christ’s call to welcome the newcomer and accompany them wherever they may be,” they said.

During this National Migration Week, observed Sept. 20-26, “we are especially mindful of that obligation and saddened to see such a disregard for human dignity,” the two Catholic leaders said. “It is in the face of each migrant that we see the face of Christ.”

The Biden administration announced Sept. 18 it would quickly begin deporting the Haitians back to Haiti, even though a majority of them did not arrive at the border recently from their homeland. News reports said many have been living in or traveling through Latin America for varying periods of time after fleeing widespread violence, political turmoil, natural disasters and economic stagnation in Haiti.

The Biden administration has been deporting asylum-seekers using Title 42, despite criticism for doing so from advocates for migrants and a court battle over it.

Title 42 is a provision of U.S. public health law that was activated by the Trump administration to expel migrants at the border, with the exception of minors, over COVID-19 concerns.

Bishop Dorsonville and Sister Markham criticized policies such as Title 42 and expedited removal because “all too often” they “deny the reality of forced migration, disregard the responsibilities enshrined in domestic and international law, and undermine the vulnerability of those against whom they are applied.”

“These are not hallmarks of a ‘fair, orderly and humane’ immigration system,” they said.

Other groups calling for humane treatment of Haitians and other migrants by the Biden administration include the Sisters of Mercy and Network, a Catholic social justice lobby.

“The Sisters of Mercy of the Americas join with people worldwide in expressing outrage over the shocking treatment of Haitian asylum-seekers trying to enter the United States in Del Rio, Texas,” the religious order said in a Sept. 22 statement. “Haitian women, children and men are among our most vulnerable sisters and brothers.”

“We call on the Biden administration to immediately end deportation flights to Haiti and to undertake measures to assure that all Haitian asylum-seekers have the right to make their case. This right is guaranteed under both domestic and international law,” it said.

The Sisters of Mercy noted Haiti in recent months “has experienced a political assassination, a massive earthquake and a fierce hurricane.”

“These catastrophic events further burden a nation with a long history of political upheaval and widespread, grinding poverty, conditions often exacerbated by U.S. policy over the years,” the statement said.

She also criticized “the continued misuse of Title 42,” saying it “relies on the false idea that we have to choose between welcoming people fleeing violence and protecting communities from the pandemic. We can do both.”

“The Biden administration must end Title 42 immediately and welcome immigrants and asylum-seekers with dignity,” she said.

In May, those Haitians who currently reside in the United States under Temporary Protected Status were told they could apply for an 18-month extension of that status so long as they meet eligibility requirements.

TPS grants a work permit and reprieve from deportation to certain people whose countries have experienced natural disasters, armed conflicts or exceptional situations so they can remain temporarily in the United States.