Catholic says ‘exuberant’ charismatic movement brought her back to church 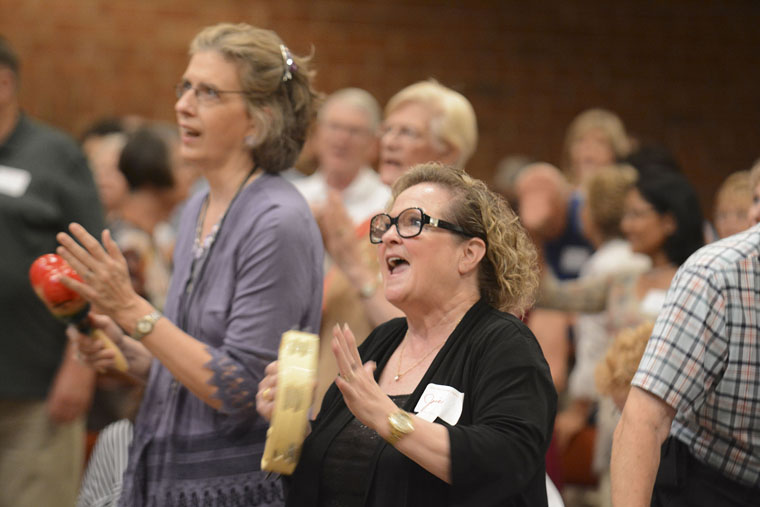 NASHVILLE, Tenn. (CNS) — Chris Shafer grew up as a “nominal Catholic,” and she wasn’t even sure she still believed in God in the mid-1970s when she moved to Fort Walton Beach, Florida, where her husband, Doug, was stationed in the U.S. Air Force.

“I found that fascinating that anybody believed in God. He was like Santa Claus you believed in childhood,” said Shafer, a parishioner at St. Ignatius of Antioch Church in Nashville. “This was no longer relevant.”

But that began to change after talking with friends from her husband’s unit who had become involved in the charismatic movement through their Episcopal church. She decided, “For this God story to survive all these thousands of years, there had to be something more than I knew about God.”

Shafer found a Catholic Charismatic Renewal prayer group and decided to attend one of their prayer meetings. “I went home thinking, ‘I walked in not even believing in God, but now I’m on fire,’” she said. “I sang all the way home.”

The Catholic Charismatic Renewal marks the 50th anniversary of its founding this year.

In 1967, a group of students and professors at Duquesne University in Pittsburgh were on a retreat when they felt engulfed by the fire of the Holy Spirit. Their experience ignited the renewal, which has touched the lives of Catholics around the world.

Shafer’s been going to prayer meetings for 40 years, including the Glory of Zion prayer group at St. Ignatius, since it was formed in 1980. “Everything I learned about God I learned at charismatic prayer meetings,” Shafer told the Tennessee Register, newspaper of the Diocese of Nashville.

The movement calls people to experience the same excitement and deep relationship with God that the first Christians experienced at Pentecost.

A charismatic gathering in some ways can resemble a Pentecostal service, with an exuberant style of worship including dancing and waving of arms, people praying over others for healing, people speaking in tongues, and others prophesying about God’s love for his people and inviting people to be open to that love.

“It is definitely exuberant,” Shafer said. “You do what the Lord’s calling you to.”

“We try to present to people first and foremost the idea of God’s love and forgiveness,” said Teresa Seibert, another charter member of the Glory of Zion prayer group.

Although she is a cradle Catholic who grew up with the more traditional style of Catholic worship, Seibert wasn’t fazed by the charismatic style.

“It didn’t scare me,” Seibert said. “The first experience of it was a real calming affect for me. I more or less saw this is what I’ve been looking for.”

The Catholic Charismatic Renewal is really more about listening to the Holy Spirit, said Father Michael Baltrus, who first got involved in the movement in the 1970s and was a member of the Glory of Zion prayer group before he left for the seminary.

“It helped me listen to God,” he said, which is “one of the best aspects” of the charismatic movement.

“You become more sensitive to what God is saying, what the Spirit is doing,” said Father Baltrus, the new pastor at St Catherine Church in McMinnville and St. Gregory Church in Smithville. Listening to the Spirit “actually sets me free in my worship. That applies to the traditional form of worship and to people that are used to expressing themselves very much.”

When people let down their defenses and open themselves to the will of the Spirit, Shafer said, they can let the Lord “break into our lives. That’s what he wants.”

That surrender to God’s will helps people develop a personal relationship with God, Shafer said, “which we don’t talk about much in the Catholic Church,” Shafer said. “It was in the renewal I learned there was a God interested in my life … who held my hand when I was in trouble.”

Doug Shafer saw his wife changing after she started going to charismatic prayer group meetings. “After a while, I could see a difference with Chris, in her attitude and how she acted. She was happier and more focused on things,” he said. “I decided I’d start going with her.”

For him, the experience was an awakening about God. “After I found God and Jesus and the Holy Spirit … I changed.”

The Catholic Charismatic Renewal is about “surrendering to the Spirit and what God wants for you,” he said. “Everyone can see themselves in Peter. … When he surrendered and repented the Holy Spirit came upon him and he could do all these things.”

Through the Charismatic Renewal, Doug Shafer entered the Catholic Church in 1982. And years later, it led him into another role as a deacon. He was ordained in 1999.