Catholics pledge to have Masses said in support of Sheen beatification 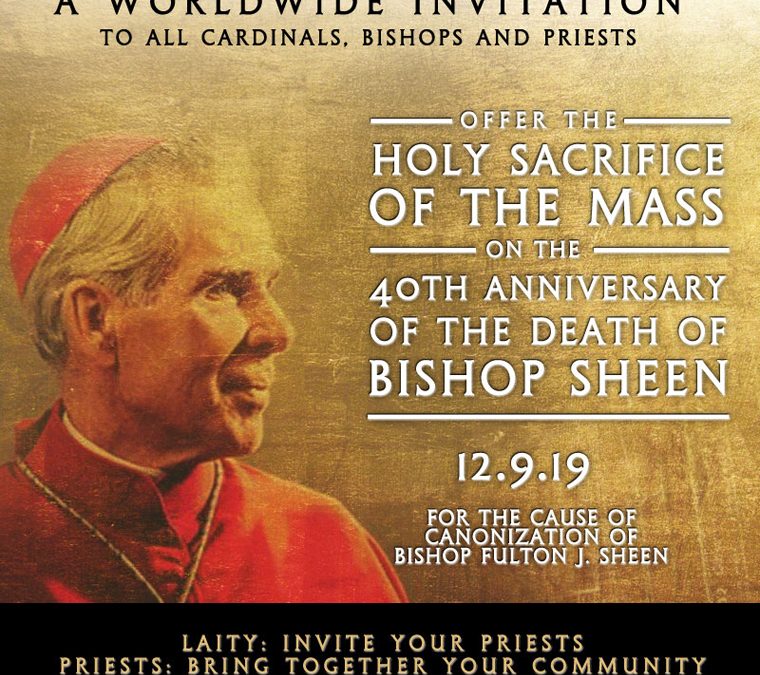 WASHINGTON (CNS) — The Dec. 3 announcement by the Diocese of Peoria, Illinois, that the Vatican has decided to postpone the beatification of Archbishop Fulton J. Sheen has led to a grassroots effort to have Masses said all over the world to pray his beatification will go forward.

Organizers of the effort hope to have “a million” Masses celebrated Dec. 9, the 40th anniversary of the prelate’s death.

“We decided to respond in the most positive and prayerful way possible (to) the disappointing news that the Vatican has paused the beatification of Archbishop Sheen,” Lo Anne Mayer, a New Jersey Catholic, told Catholic News Service Dec. 5. “The clergy who offer these Masses and the laity who attend the Masses will storm heaven for an end to this unfortunate situation.”

The beatification ceremony for Archbishop Sheen was planned for Dec. 21 in Peoria at St. Mary’s Cathedral. The Peoria Diocese announced it was informed Dec. 2 of the postponement.

“Millions of people knew and loved Archbishop Sheen and remember his devotion to the good Lord and to the Holy Father,” said Mayer, who is among those who knew the archbishop and greatly admire him.

“Anyone who witnessed Mass offered by Archbishop Sheen could see and feel how deeply devoted he was to the Eucharist,” she added. “What better way could we ask God’s blessing than inviting people to join us at Mass for the intention of his canonization?”

In 2017, Mayer was one of several people who organized an effort calling on Catholic churches around the world to celebrate a special Mass on the May 8 birthday of the archbishop, who was an Emmy-winning televangelist and who spread the Gospel message far and wide as head of the Propagation of the Faith from 1950 to 1966.

“Those of us who worked for many years on the cause of Archbishop Sheen know that Archbishop Sheen lived a life of prayer,” she told CNS Dec. 5. “His prayer life is almost as well-known as his preaching and teaching and is often referred to in the 66 books that he wrote. He encouraged us all to pray for God’s blessing.

“It would be a blessing to people around the world if he were canonized, so we decided to storm heaven with prayers from people all over the world whom he inspired,” Mayer added.

The reason for postponement of the Sheen beatification was given in a Dec. 5 statement from the Diocese of Rochester, New York — which then-Bishop Sheen headed from October 1966 until his retirement in October 1969, when he received the title of archbishop.

The diocese has raised concerns over the prelate’s role in priests’ assignments and took those concerns to the Congregation for Saints’ Causes. As a result, Vatican officials said they want to give a further review of these records before the beatification goes forward.

“In our current climate, it is important for the faithful to know that there has never been, nor is there now, any allegation against (Archbishop) Sheen involving the abuse of a minor,” the Peoria Diocese said in its statement.

The social media platform Catholic Connect and other Catholic online media outlets began spreading the word about the effort to have Masses said for Archbishop Sheen’s cause midday Dec. 5 and within hours had nearly 300,000 “hits” from people wanting to pledge Masses in their dioceses.

The Eternal Word Television Network, the National Catholic Register and numerous other Catholic media outlets put the word out on Facebook.

“Priest can offer Mass, the laity can go to Mass and the infirm can say the rosary on Dec. 9,” said Mayer.

Fulton John Sheen, a native of El Paso, Illinois, was ordained Sept. 20, 1919, at St. Mary’s Cathedral in Peoria. He went on to teach at The Catholic University of America in Washington and lead the Society of the Propagation of the Faith. Perhaps he is best remembered for his popular television show, “Life Is Worth Living.”

He died in 1979 at age 84. His sainthood cause was officially opened in 2003. The church declared his heroic virtues and he was given the title “Venerable” in 2012 by Pope Benedict XVI.

In July, Peoria Bishop Daniel R. Jenky announced Pope Francis had approved a miracle attributed to the intercession of Archbishop Sheen, which led the way to the announcement he would be beatified.