CEO exits with a record of growth and service 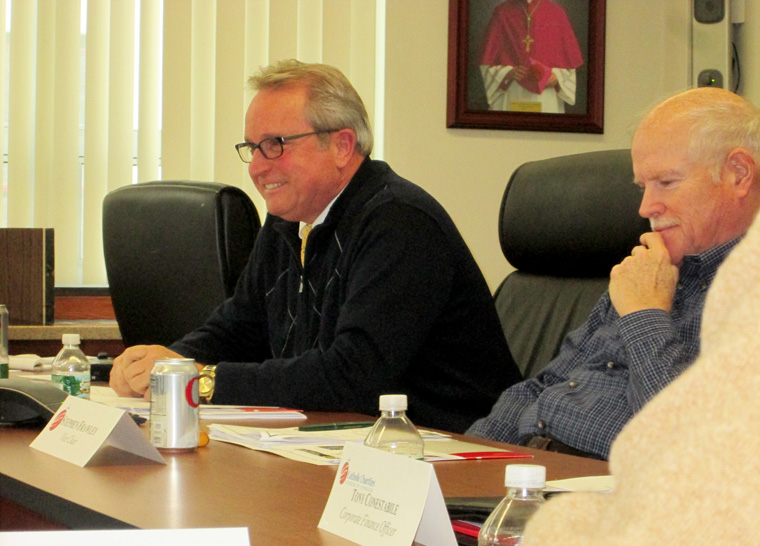 When Joseph G. Slavik started as CEO and president of Catholic Charities for the diocese, the annual budget was $48 million. Next year, the agency is projecting a budget of $64 million, he said.

“That’s seven years’ worth of growth,” he said.

He added: “I look at that as creativity, and the willingness of the directors [of the six Catholic Charities agencies within the diocese] to really reach out to the communities to do things for others.”

At his final meeting of the Catholic Charities Board of Trustees two weeks ago, Slavik looked at the people around the room in the chancery and said, “The bishops have supported us all along the way. Bishop [Robert J.] Cunningham has been extremely supportive of our work at Catholic Charities. …

“Kudos to all of you. Thank you very much for your time and your talents. … The system needs you, and I hope that you will stay on and continue the good things that you’re doing.”

In an interview at Catholic Charities’ central office, Slavik laid out some of the ways in which the six individual agencies help their communities. Here is the list of the six agencies and their executives, and Slavik’s comments on some of their highlights:

Melara has taken on the task of employment and job training for refugees and people who are homeless as part of his charter. “And he’s done very well with it; very successful at it.”

Another highlight is Project Joseph, which has finished repairing more than 2,000 monuments in St. Agnes Cemetery in Syracuse. Melara reported that a 92-year-old World War II veteran’s parents are buried at St. Agnes, and the veteran was so pleased with the work there that he made a donation.

The Project Joseph workers have transitioned to doing snow removal for the city of Syracuse at 305 delinquent properties.

Part of the Onondaga office is Toomey Residential and Community Services. It helps children who have disabilities and mental-health issues.

The agency was just gifted a $3.3 million piece of property to house all of its programs. Also, the agency is engaged in the “health home” field. It is not a physical home; it is a system that offers comprehensive medical treatment and behavioral-health assistance.

“They have done an awful lot of development work in terms of fundraising.” The office also emphasizes the housing of clients who are mentally ill and clients who suffer from substance abuse.

One project that is in the works is Grady’s Way, which will be an emergency shelter for homeless boys. Like the other five Catholic Charities agencies in the diocese, Oneida/Madison also offers food pantries.

Its uniqueness is “in the response to the special-needs populations of Chenango County, through housing and day programming, things of that nature.”

This office has been identified by the state as a “health home,” for adults and now for children as well.

A new initiative to serve upstate children and families is a partnership on the health-home front with the Dioceses of Albany, Syracuse, Rochester, and Buffalo.

“Again, very much engaged in housing.” The office is installing the Riverview Project, a 39-unit residence that will house a diverse population of people with low to middle incomes. The office also offers help for people who suffer from substance abuse or mental illness.

Attendees at the board meeting praised Slavik’s leadership.

“I think Joe is kind of the epitome of compassion, when it comes to serving folks who are struggling and who are poor,” Melara said.

“He’s been a great mentor and a great example to Catholic Charities. … Catholic Charities has pretty much been his life, and his family’s life,” Accardi said. She added that a ceremony was held Dec. 16 to rename one of the office’s conference rooms in Slavik’s honor; it used to be his old office when he directed Catholic Charities of Broome County.

Stephen Frawley, vice chairman of the board, said Slavik “let [the area directors] be very autonomous. And he chimed in when he needed to be a presence, a support system, and I think he was very encouraging to those area directors, which I think allowed growth.”