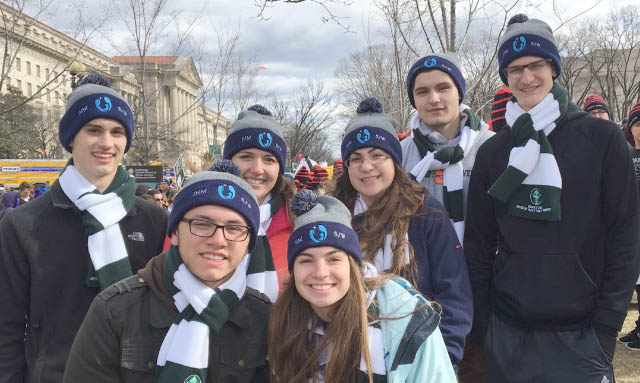 One pilgrim concluded, “It’s cool to be Catholic.” Another felt “an unforgettable sense of peace.” A third sensed “a unified resolve” to respect every life.

Hundreds of people from the Diocese of Syracuse attended the 44th annual March for Life on Jan. 27 in Washington, D.C. Catholic News Service (CNS) reported that the day was mostly sunny with 40-degree temperatures. CNS quoted Jeanne Mancini, president of the March for Life, as saying, “The only number we care about is the 58 million” lost to abortion since it was legalized.

Several people from the Syracuse Diocese who attended the march wrote their observations for the Sun. The submissions were edited for length.

I can best describe my experience of the March for Life by sharing several aspects of the trip that had a profound impact on me.

When we first arrived in Washington, we went directly to the Basilica of the National Shrine of the Immaculate Conception where Bishop Cunningham offered Mass for us in the beautiful Crypt Church. Seeing the Bishop and many priests and seminarians from our diocese on the altar, I realized what true and faithful Fathers they are. They had made the pilgrimage to the March for Life for the good of their “faith family.” They were offering the power of their prayer and sacrifice in defense of the most vulnerable among us and for the reconciliation and healing for those wounded by the sin of abortion.

Another high point of the trip was traveling to the National Mall for the rally preceding the March. As I stood listening to Vice President Pence proclaim that “life is winning again in America,” with the beauty of the Washington Monument surrounded by American flags in view, I was overpowered with a sense of pride in this great nation and a hopeful optimism for the future.

I was inspired by his message, “to let your gentleness be evident to all” and to “let this movement be known for love, not anger … for compassion not confrontation.”  It is with “generosity not judgment that we are to reach out to mothers and their unborn children, meeting them where they are.”

“We are the pro-life generation!” was the chant of the rally and march.

Another powerful witness on the March was the presence of so many priests, seminarians, and religious brothers and sisters.

The presence of God overshadowed every moment of this trip. As young people, we went not for amusement but to witness the truth that EVERY life, no matter how small, frail, or forgotten, is the image of God and also His dwelling. Our small sacrifices were made purely out of love for Jesus and to defend the beauty and sanctity of the life He has given us all.

At the “Life is Very Good” rally we attended the night prior to the March, we witnessed Eucharistic benediction and a procession during which thousands of young people, on their knees, reached out their hands to Jesus, the fountain of life in the Eucharist, while many wept with joy at His overwhelming presence among us and the power that was felt from adoring Him with gratitude for our lives.

Although we cheered for incredible speakers and an amazing music group, the young people roared all the more for God, Who is our faithful lover and the reason behind our existence. The rally solidified in us the truth that God will never, ever leave us, even in life’s darkest valleys, and that we must completely trust Him!

The March for Life filled us with faith, knowing that we are never alone in believing Truth, although it may sometimes seem so in this world. There was no anger in this peaceful protest, only love and hope that one day our beautiful nation will fully come to see each and every human life as irreplaceably valuable.

When we later visited Mount St. Mary’s Shrine of Our Lady of Lourdes, in Emmitsburg,  Md., there was an unforgettable sense of peace. Living faith was indeed shown by the young people of our diocese as we, in total silence, venerated Mary at a grotto atop a beautiful hill where the grace of God shined upon us all. To see all the teenagers, priests, and chaperones leave their intentions with Mary while lovingly touching a stone from Lourdes, France, was incredibly uplifting and gave us renewed zeal for living our Faith.

In the end, this trip increased in us the belief that every human life is precious and the image of God, and now we long for that day when the whole world will realize this beautiful truth.

Our Lady of Lourdes, Utica:

This year’s March for Life in Washington was the first I’ve attended. I am very proud to have participated in the march and taken part in something so memorable.

I like to think of the March for Life as more of a movement, rather than a protest. Everyone was quiet or singing songs of worship at times. There was no violence, rioting, or any negativity. It was a peaceful movement.

It was so comforting to know all the thousands of people surrounding me were on the same page I was on. We all had the same beliefs, supported the same thing, and came together as a voice for the unborn. Most people my age think supporting life isn’t important; it’s embarrassing or they just take it for granted. I found it momentous that so many young people took part in the march as well as people of all faiths, cultures, and ethnic backgrounds, coming together to celebrate life, to be a voice for the voiceless, and to understand the gift God has given us all.

I feel very strengthened after this experience. I am strengthened in my faith, my relationship with God, and my personal beliefs. I feel that with help from God, a strong faith, and the right people, change can happen, and positivity outdoes negativity.

I strongly recommend attending the March for Life to anyone who believes in and appreciates the sacredness of life. It was certainly worth the trip.

As an active member of my parish community and youth group, this year was my third year participating in the March for Life pilgrimage with the Diocese of Syracuse. On the way to Washington, D.C., we stopped at the National Shrine of St. Elizabeth Ann Seton and had an opportunity to pray.

That night, we went to George Mason University to attend the “Life is VERY Good Evening of Prayer Rally.” At this event we heard from great speakers ranging from comedians to bishops. We also were privileged to do adoration, a prayerful encounter between Jesus Christ and myself. During this time we had the opportunity to pray for our intentions as well as those of the March for Life: the dignity and sanctity of all human life from conception to natural death.

On Friday, Jan. 27, we attended Mass at the Basilica of the National Shrine of the Immaculate Conception with our own Bishop Cunningham and clergy and pilgrims of the diocese as a part of the “National Prayer Vigil for Life.” After Mass, I took part in the March for Life peacefully and prayerfully processing to bring attention to the need for protection of all life. It was so amazing to be a part of a march of hundreds of thousands of people.

The day following the March for Life, the youth of the diocese went to visit the Smithsonian Museums. While walking from one building to a museum with a group of youth and adult chaperones from my parish, we passed a person who seemed to be living in a large cardboard box. As we kept walking down the street, our Adult Leader and Pastoral Associate of our parish, Amy Wojcikowski, turned around, went back, and talked with the person inside the box. Many people keep walking when they come across those in need on the streets, but Amy saw this child of God and stopped to offer her love and compassion, talking and offering friendship, and then gave the woman some money to help her buy her next meal. Our kindhearted leader showed mercy to a person who may not have had any other positive interactions that morning. Amy committed a selfless act of love as she saw God in that person, and in that same way, we should strive to see God in all people.

Going on the March for Life gets better every single year. I started going when I was a sophomore. Many of my friends that went on this trip are also seniors, and it was bittersweet to have all of us together before we graduate in June. I have been going to my youth group at Immaculate Heart of Mary and St. Joseph the Worker for close to five years. My friends and I love going on this trip; it’s definitely one of the events that we always look forward to.

A common theme that came up throughout this pilgrimage was that change starts with us, the youth. We feel the need to change the world and protect the unborn. We are living in a world where our nation is divided. The Catholic Church amazes me especially regarding its youth. We are the witnesses of Christ and this generation believes that change will happen when it comes to abortion.

Choosing life is one of the best things that anyone can do; we believe that life is so precious. This pilgrimage has made me realize that if we continue spreading His word and stand true to our faith, there will be change and it will be great.

Even though our first day of the trip did not go as planned because one of our buses broke down, God had another plan for us. Our schedule changed but our faith did not. It’s amazing to see what He can do for us in times of worry.

Thursday, we went to the “Life is Very Good” rally and my group was all the way at the top of the arena. I loved sitting up there because you could see the thousands of people enjoying God’s presence. My group and I noticed how silent that arena got when adoration began. We needed that silence to pray for an end to abortion, for the mothers that are possibly thinking about one, and for every single baby that deserves life.

When we arrived in Syracuse on Saturday night, my friends and I were exhausted but we were glad to have spent those three days together. When I walk down the bus steps after any trip with my youth group, I always think to myself that it really is cool to be Catholic.