‘Children of the promise’ 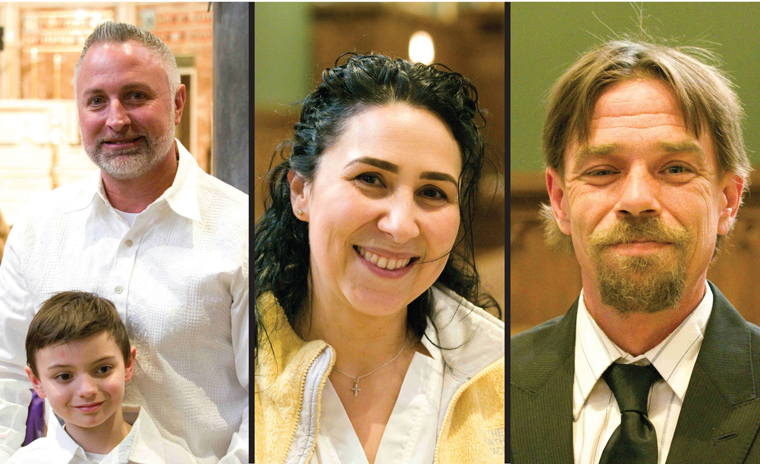 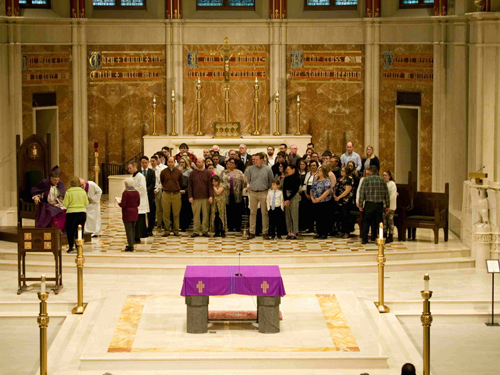 The Elect gather in the sanctuary with Bishop Robert J. Cunningham.

Catechumens are declared ‘members of the Elect’

The little boy posed a question.

His father, Richard Hadley, answered that he had never really thought of it. It was perhaps a few weeks later, around Christmas, when Tripp said: “‘I would like to get baptized.’”

“It was more of an amazing-type statement that he said,” Richard recalled, “because that’s when it hit me: … [He] and I can both be baptized together. And it’s been an amazing journey up until today and it will continue to be very special.”

“We’re twins,” Tripp said Sunday at the Cathedral of the Immaculate Conception in Syracuse, where the Hadleys and other “children of the promise” marked a key point in their journey toward baptism: the Rite of Election.

The catechumens walked to the altar with their godparents to sign the Book of Elect; they took a few more paces and spoke briefly with Bishop Robert J. Cunningham. Then they gathered in the sanctuary amid the music and the applause from the pews. 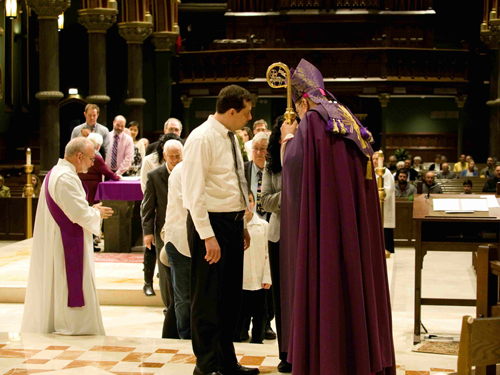 Bishop Robert J. Cunningham greets the catechumens and their godparents. “They will be baptized into Christ Jesus,” the bishop says of the Elect. (Sun photos | Chuck Wainwright)

“I was actually mesmerized with the atmosphere and just the beautiful feeling of being surrounded by other catechumens,” said Richard Hadley, from the Parish of Saints John and Andrew in Binghamton.

Another catechumen, Autumn Bagley, of St. Augustine Church in Baldwinsville, said that the sound of the applause as she stood in the sanctuary with the other Elect gave her “goose bumps.” She doesn’t know if she’ll ever hear a sound like that one again.

Father Joseph E. Scardella, diocesan director of the Office of Liturgy and Rite of Christian Initiation of Adults (RCIA), said 49 catechumens from 24 parishes are preparing for baptism. In addition to their godparents, they were joined Sunday by sponsors, families, and pastors.

“Wonderful sight to be gathered here,” the bishop said, “to see our cathedral filled — men and women, young and old, ready to step forward and join us.”

The godparents affirmed to the bishop that the catechumens have begun to walk in God’s presence and have faithfully listened to God’s word proclaimed by the Church. In turn, the catechumens affirmed that they wish to enter fully into the life of the Church through the sacraments of baptism, confirmation, and the Eucharist.

With their signatures entered, Bishop Cunningham declared the catechumens to be members of the Elect, to be initiated into the sacred mysteries at the next Easter Vigil.

As he prayed over the Elect, the bishop asked the Lord God to “add these chosen ones to the harvest of your new covenant. As true children of the promise, may they rejoice in eternal life.”

The bishop also told the catechumens: “Prayer can make us all saints.”

Tripp Hadley said they pray every morning and every afternoon at his school, St. John the Evangelist in Binghamton. 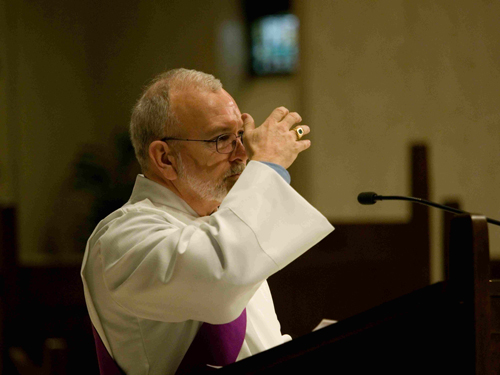 Deacon Jeffrey A. Dean of St. Stephen Church in Phoenix prepares to read the Gospel:
Luke 4:1-13. Deacon Dean also read the prayers for the Elect, including a prayer that the Elect be grateful for the blessings they have received from heaven.

‘WHERE GOD WANTED YOU’

“I can tell you this, Tripp,” his father said, “that you’re at a Catholic school because that’s where God wanted you, OK?”

“I’m amazed by Tripp,” said Karen A. Howard, the RCIA coordinator for Saints John and Andrew Church, “and I’m just amazed by his faith, both of them.”

“I thought the ceremony went very well,” said Msgr. Michael T. Meagher, the pastor at Saints John and Andrew. “It was very meaningful; the bishop does a wonderful job of greeting people and being with them, and we are very blessed at Saints John and Andrew to have father and son, and the excitement about coming into the Church being baptized. So it’s a beautiful thing.”

Catechumen Christopher Barnes attends St. Stephen Church in Phoenix, where Father Scardella is the pastor. Barnes said he was at Sunday’s Rite of Election to start his journey in the Christian life. He wants to get baptized and “go in the straight line … with Jesus Christ as my Lord.”

He said he was in church when his mother was baptized. “I felt a deep warmth in my heart,” he said. “Everything about me started to change.” When he came back and saw his mother at church again, he said, “the warmth came back.”

Catechumen Autumn Bagley said when she approached Bishop Cunningham in the sanctuary, “he said, ‘Welcome.’ … There was just something very warm and soft about this whole experience. I wasn’t really sure what to expect but it was a very cathartic moment for me.”

In 2014, Autumn and her husband, Andrew, experienced the tragic loss of their daughter in a stillbirth. 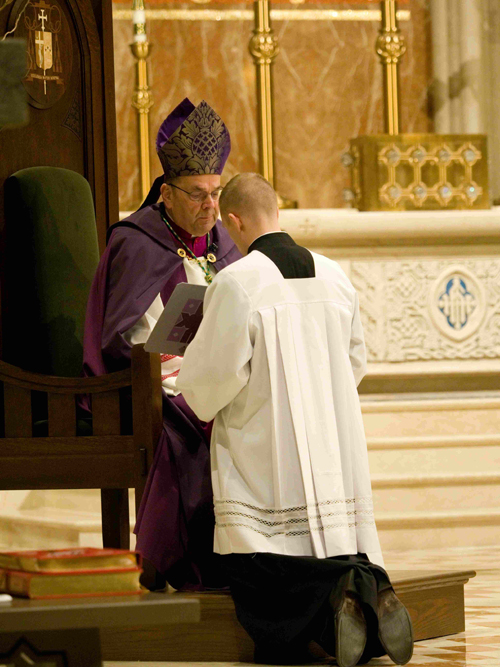 Bishop Robert J. Cunningham told the
gathering: “This Rite of Election calls you and all of us to ongoing conversion.”

“Father Cliff [Auth] from St. Augustine’s had been at our side the whole time,” she said. “My husband’s Catholic and I had never established a faith growing up, and after we lost my daughter, I decided that I wanted to have a connection with God. I felt like that would help me keep a connection with my daughter that I lost.”

Father Auth actually came to the hospital, she recalled: “It really solidified the idea that there was something bigger out there, and I wanted to connect with it.” She called it “just a bigger force.”

Now Autumn and Andrew have a daughter, Quincy, 9, and a son, Vincent, 4.

Bishop Cunningham had told the Elect: “My dear catechumens, God has been very active in your lives.”

Autumn agreed: “He’s given me a stronger connection with my children. Both my children have been baptized and I wanted to have that for myself, be able to learn with them and experience that, so it wasn’t just me telling my kids to do something and not doing it myself.

“And I think doing it as an adult, you really get a better fulfillment out of it … because you really have a totally different understanding, a whole different view and appreciation for what it really entails.”

The Scriptures have taught Autumn about “finding joy in everything,” including her family and even the trivial things too.