Christ is ‘springboard’ for doctor serving her people of Blackfeet Nation 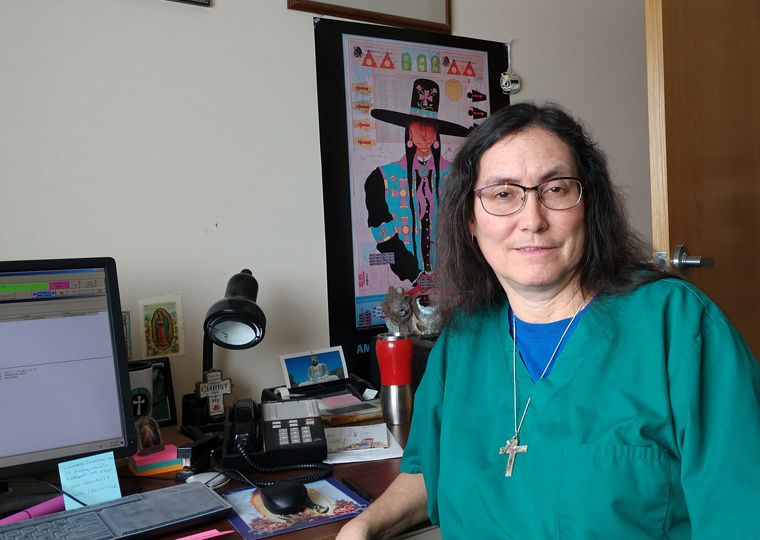 BROWNING, Mont. (CNS) — As a physician for Indian Health Service on the Blackfeet Reservation in Browning, Dr. Mary DesRosier serves her neighbors, her friends and her family — and sees the face of God in them.

DesRosier grew up in Browning, in the shadow of the Rocky Mountains, as a member of the Blackfeet tribe and leads a eucharistic prayer group at Little Flower Parish, the same church where she received her first communion.

When she graduated from high school, DesRosier joined the University of North Dakota’s Indians Into Medicine Program. During her time away from Browning she longed for home and returned several times to work at the hospital on the reservation.

“I was lonesome for home the whole time,” DesRosier admitted. But each time she served her people at the hospital, “there a was peace in my heart that I knew that was what I was supposed to do.”

When she graduated from the University of North Dakota School of Medicine, she became the first woman in the Blackfeet tribe to earn a doctorate in medicine. Following her residency, she returned to the reservation to practice medicine with IHS, an agency within the U.S. Department of Health and Human Services.

“I left here with the intention of coming back here to work and live,” she told Extension, the magazine of Chicago-based Catholic Extension, the leading national supporter of missionary work in poor and remote parts of the United States.

“There’s something about these mountains and this wind, and the people, the culture, that makes it hard to live anywhere else,” she added.

A 2017 community health assessment by the Blackfeet Tribal Health Department reported that the poverty rate on the Blackfeet Indian Reservation is 37%, compared to the Montana state average of 15%.

As a family medicine doctor, DesRosier is on the front lines of the opioid epidemic. Her patients often struggle with addiction, depression and substance abuse. Liver-related deaths and drug use and poisoning deaths are among the top five causes of death on the reservation.

Despite the statistics, DesRosier’s patients are living examples of faith in action. They face challenges that are unimaginable to many with faith and humor.

“It’s been the hardest job I’ve ever done, but the most rewarding,” she said. “I feel like I’m ministered to by them.”

“For thousands of years we’ve had him, by a different name, in our culture,” she said. “We have a heart for the one true God, Jesus.”

Recognizing Browning’s faith in the face of adversity, Catholic Extension has supported the Little Flower Parish community since 1973.

“We in our community have such a strong Christian faith,” she said. “Only through the grace of God, right?”

DesRosier spends time with Jesus each morning before work. The strength she gets from her faith is immeasurable.

“I can’t do anything without Jesus,” she said. “He is my springboard, walking with me every day. In difficult situations, His grace just comes in and takes over.”

“Her leadership is such that the women of the parish love to be around her,” said Father Ed Kohler, pastor at Little Flower Parish and recipient of Catholic Extension’s 2010 Lumen

Christi Award. “Her love for the Lord is a light that burns bright for Christ.”

In 2017, the Diocese of Helena nominated DesRosier for the Lumen Christi Award for her contributions to the Catholic community.

DesRosier said the community has a heart for Christ.

“There’s a lot of pain, sorrow and suffering, but our people are still joyful and happy,” she said. “They know where to come when they need healing.”

Browning is a community of great struggle but also of great faith. As a medical and spiritual leader, DesRosier heals her people in many ways.

“They are not just any people, they are my people,” she said. “When they are suffering I’m driven, from my heart and soul, to help them however I can.”