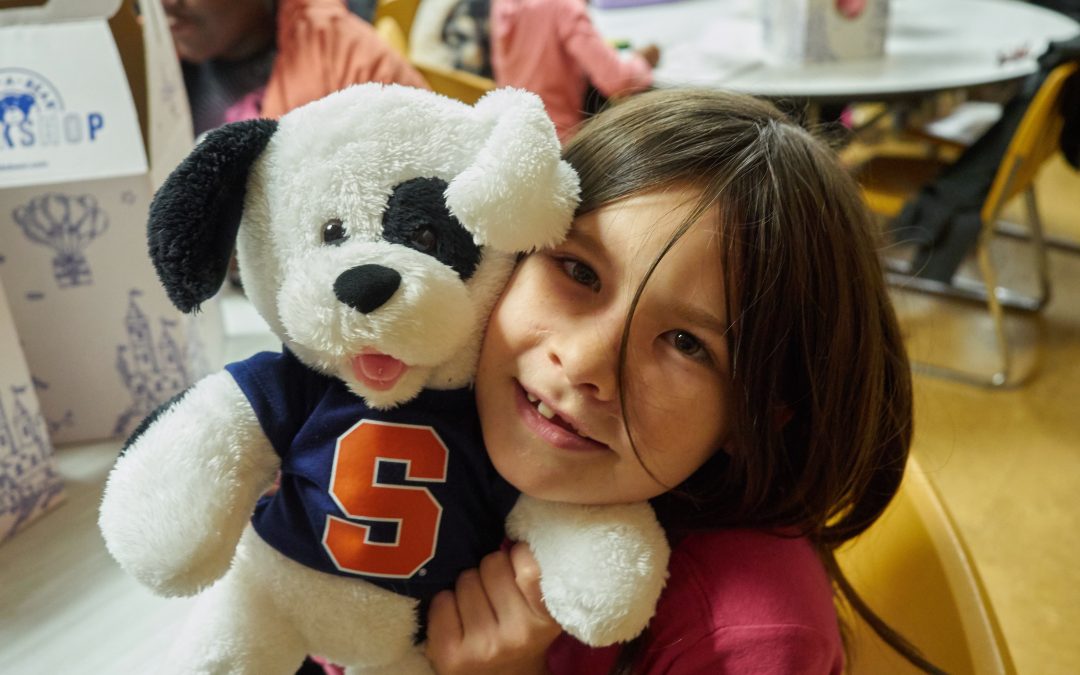 “Yeah!” is the word for presentation party at Bellevue Elementary

There are many ways to build a bear, but there is only one socially acceptable construct for a bear party.

“If you’re a reindeer sitting with the elves, you’re in the wrong section,” Terri Condon advised the crowd Dec. 21 at Bellevue Elementary School in Syracuse.

High school and college students — designated in groupings of Santa, snowman, elf, or reindeer — had spent their own money at Build-A-Bear Workshops at the mall. Now they were waiting in the Bellevue cafeteria for the beneficiaries of their generosity to appear: about 80 second- and third-graders who were destined to receive a classy, custom-designed stuffed animal for Christmas.

The bears, some of them momentarily nameless, sat in their cardboard carriers on the tables, a black tail or a gob of pink fluff sticking out of the “breathing” holes. Quiet as they were, with their hidden satin hearts sewn inside after a kiss by the donors, these slumbering bears would soon amaze with the power of instant friendship.

Giving out instructions over the microphone were Condon, youth minister at St. Charles-St. Ann Church in Syracuse, and Cindy Heath, youth minister at St. Joseph in Camillus. They have been organizing this Christmas giveaway for nine years at various elementary schools. Both of these benefactors glowed, especially Heath: Her necklace consisted of a string of Christmas lights that kept blinking. “We usually do light up,” Condon said laughingly.

“Please do not open your bear,” she reminded the high school and college students, “until everybody gets a bear and sits down with you. … Then we’ll say one, two, three, and they all can open their bear.”

Also inside the bear boxes were coloring books, crayons, and tiny hangers for the bears’ fancy clothing. A parishioner from St. Joseph donated the coloring books, and St. Charles-St. Ann donated the crayons. Also waiting for the tykes’ arrival were mini-muffins and juice, all set up on a table.
After 20 minutes, the Bellevue students filed in, looking so small in contrast to the older kids who would now get to know them one-on-one. Included were some third-graders who had been honored with a call to attend; they were paired with college students who couldn’t resist reliving their high school Build-A-Bear days.

One of those college students was Josh Popp, who was with the St. Charles-St. Ann group. He built a beautiful bear but “I didn’t name it so that the kid can name it”: impeccable logic from a Cornell University sophomore who is majoring in bioengineering.

“I came to St. Charles when I was in high school,” he said, “and was really involved in the youth group. And we always did this project and I really enjoyed it, so my friends and I come back every year.”

Condon and Heath led the countdown, and out of the boxes came the Build-A-Bears.

The whole cafeteria, which spreads out in front of the stage, was aflutter with fluff. The bears burst, it seemed, from the constellation Ursa Major, forming not an outline in the sky but a puffy presence in little kids’ hands.

Second-grader Avah Smith, new owner of an “Elsa Bear” named for a princess in the Disney “Frozen” franchise, erupted with an enthusiasm that could set any princess bear to dancing.

“You DID get an Elsa Bear!” confirmed her high school counterpart, Avery Paige, a West Genesee High School junior who was with the St. Joseph group.

“I love coming to do this; it’s so much fun,” Paige said. “It just makes us feel so good about ourselves, that we can give back to people who are so cute like this. And their smiles are priceless when they open up their bears. It’s awesome.”

It was a popular word.

Third-grader Ah-mier Stewart waved his Build-A-Bear’s paw at a visitor to his table. The bear himself seemed too overwhelmed to speak, so Stewart said on his behalf: “Hey, hi! You’re awesome!”

Ah-mier affectionately pawed at his bear’s paw pad and invited the visitor to do the same, already being gracious with the touches on the prized animal.

Second-grader Tymere Duberry named his new bear “JJ Spike Zane.” The “JJ” part of the name is in honor of Tymere’s friend.

Asked what he liked about JJ Spike Zane, Tymere said, “What I like about it is because it’s about life.”

At the same table as Ah-mier and Tymere was third-grader Elizabeth Labaff. She said, “And I got a puppy!” while making a loving cooing noise.

Her stuffed toy is in the style of the Ruff n’ Tumble Puppy that is advertised online.

She named the puppy Sunshine, “because it’s a girl, and she’s cute, and she likes to stare at the light.”

Elizabeth pushed the puppy against a visitor, and there was warmth in Sunshine.

One of the Build-A-Bear donors at Elizabeth’s table was Brianne Lovine, a DeSales University freshman who was with the St. Charles-St. Ann group.
“This is actually my favorite church project that we do throughout the year,” she said.

She explained that the kids are “always so grateful for what we’re doing for them. It’s such a small thing to take some time out of your day and come visit the kids, and they just get a kick out of it. It’s always nice to see them happy during the holidays.”

With a rapid pacing, in the style of a teacher trying to recount “The Story of the Three Bears” before class ends, Lovine explained the sprightly little bear-birthing ritual. It sounds as if these bears don’t need a mall, they need a laboratory:

“You go to Build-A-Bear, and then they stuff it up for you, and then you take one of the hearts, and then you gotta rub it on your heart to give it lots of love, you gotta jump it up and down so it gets a lot of exercise, you gotta put it on your nose so it always knows where home is, … you do a whole bunch of stuff to make sure that the bear knows exactly what to do.”

So it does have a heart?

So do the donors; they spent $17, $20, or even more to put together the stuffed animals.

Bellevue Principal Sarah Cupelli, a Build-A-Bear veteran herself, agreed that making the bear is a lot of work.

The whole Build-A-Bear party is an enjoyable and engaging way for the little children to “engage in a new relationship with an adult that they may not have had before,” Cupelli said. “It does something to really get them excited about the holiday season.”

When the principal was a kid herself, she loved Cabbage Patch dolls. Similar to a Build-A-Bear, they come with a little certificate with their “birthday” on it.

“I’m partial to the babies; I like the Cabbage Patch babies,” she said.

As she spoke, the crowd started singing “Jingle Bells.”

Third-grader Elizabeth Labaff snuggles with her new stuffed puppy, named Sunshine because “she’s cute, and she likes to stare at the light.” SUN PHOTO | CHUCK WAINWRIGHT

Third-grader Elizabeth Labaff snuggles with her new stuffed puppy, named Sunshine because “she’s cute, and she likes to stare at the light.” SUN PHOTO | CHUCK WAINWRIGHT