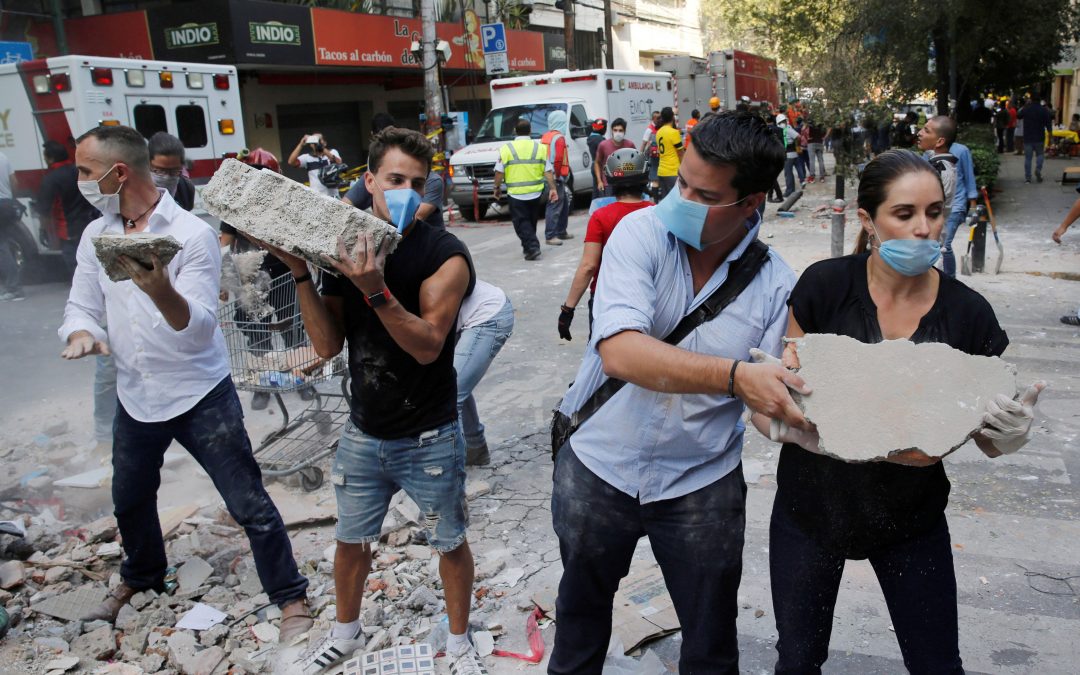 MEXICO CITY (CNS) — Mexican church leaders offered prayers and urged generosity after an earthquake struck the national capital and its environs, claiming more than 240 lives — including at least 20 children trapped in a collapsed school.

The magnitude 7.1 earthquake Sept. 19 added to the misery of Mexicans who suffered a magnitude 8.1 earthquake 12 days earlier. That quake left nearly 100 dead in the country’s southern states and left thousands more homeless.

“We join the pain and grief of the victims of the earthquake, which occurred today … in various parts of our country,” the Mexican bishops’ conference said in a Sept. 19 statement. “Today, more than ever, we invite the community of God to join in solidarity for our brothers who are suffering various calamities that have struck our country.”

Mexicans have responded to the earthquake with acts of solidarity. The telephone system was overwhelmed and traffic snarled as power outages affected traffic lights. In hard-hit neighborhoods, people poured in, armed with buckets and shovels to help clear rubble from collapsed buildings, where people were trapped. Others were quick to donate food and drink to those assisting.

“Once again we are witnesses to the people of Mexico’s solidarity,” the bishops’ statement said. “Thousands of hands have formed chains of life to rescue, feed or do their small part in the face of these emergencies.”

Caritas chapters across the country opened collection centers to help those harmed by the earthquake. In Mexico City, Cardinal Norberto Rivera Carrera asked all parishes in the impacted areas, along with priests religious and laity to “collaborate with the authorities in order to assist people that have been affected and show Christian solidarity,” said an article published in archdiocesan newspaper Desde la Fe.

Dioceses in Puebla and Morelos, south of the capital, reported widespread damage to churches. Caritas Mexico, the church’s aid organization, reported at least 42 people dead in Morelos and 13 deaths in Puebla, where a dozen churches also collapsed.

A private school collapsed in Mexico City, trapping students ranging from kindergarten to junior high school. The Associated Press reported at least 25 students and teachers died, with others remaining unaccounted for.
As often happens in disasters, authorities expected the death toll to rise, because people could have been trapped in buildings when they collapsed.

At his general audience Sept. 20, Pope Francis prayed for victims and rescue personnel, invoking Our Lady of Guadalupe, patroness of Mexico.

“In this moment of suffering,” he said, “I want to express my closeness and prayers to the entire Mexican population.”

Cardinal Norberto Rivera Carrera of Mexico City expressed his sympathy to the relatives of those who had lost loved ones in the earthquake. He urged parishes, religious and the lay faithful to work with government authorities to “aid people who have been affected and demonstrate Christian solidarity.”

The quake epicenter was in Puebla, southeast of Mexico City. Earthquakes usually affect Mexico City as much of it is built on a former lake bed and buildings sway in the soft soil, even though the epicenters are in distant states. That phenomenon allows an earthquake warning to sound, giving people approximately a minute to evacuate their buildings. The alarm did not sound Sept. 19, however.

“It totally frightened me,” said Pedro Anaya, a small-business owner.

He decided to help, joining the hundreds of people hauling away debris from a collapsed apartment building in the trendy Condesa neighborhood.

“I saw that my family was OK so I came to help,” he said.

Contributing to this story was Barbara Fraser in Lima, Peru.