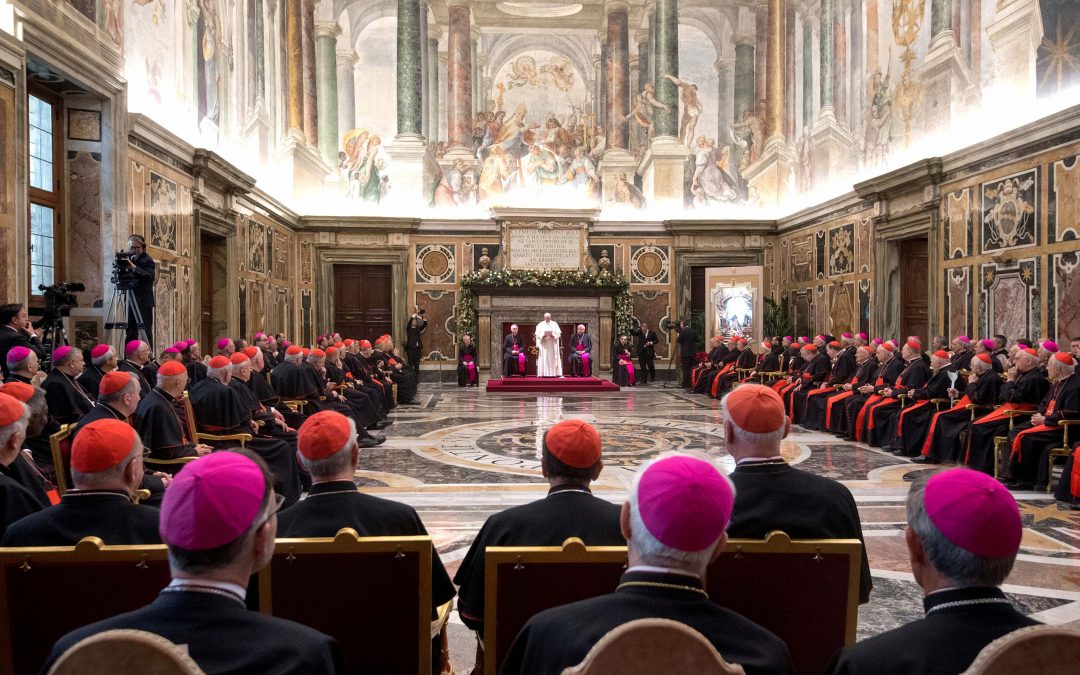 In this 2017 file photo, Pope Francis speaks during his annual pre-Christmas meeting with top officials of the Roman Curia and members of the College of Cardinals in Clementine Hall at the Vatican. (CNS photo | Claudio Peri pool via Reuters)

VATICAN CITY (CNS) — Acknowledging the gravity of the clerical sexual abuse crisis, Pope Francis told members of the Roman Curia that the church’s strength does not depend on its members’ perfection, but on the willingness to recognize its failings and correct them.

“Let it be clear that before these abominations, the church will spare no effort to do all that is necessary to bring to justice whosoever has committed such crimes,” the pope said Dec. 21 during his annual pre-Christmas meeting with officials of the Curia.

And speaking directly to clerics who have abused children, Pope Francis said: “Convert and hand yourself over to human justice and prepare for divine justice.”

While it is “undeniable” that in the past many allegations of abuse were not handled with the necessary “seriousness and promptness,” the pope said, “that must never happen again.”

“The church,” he said, “will never seek to hush up or not take seriously any case.”

Pope Francis’ 35-minute speech to the Curia included a review of the “joys and afflictions” of the church in the past year and a meditation on the message Christmas proclaims to the church and its members.

The pope’s list of “joys” in 2018 included the Synod of Bishops on young people, the ongoing reform of the Roman Curia and the many canonizations and beatifications that were celebrated; he specifically mentioned the beatification in December of 19 martyrs in Algeria, including the monks of Tibhirine.

The joys, he said, also include “the great number of faithful who each year receive baptism” or return to active church life, parents who pass on the faith to their children, young people who enter the priesthood or religious life and the “great number of consecrated men and women, bishops and priests, who daily live their calling in fidelity, silence, holiness and self-denial.”

The “afflictions” of the church include the afflictions of the world, Pope Francis said, mentioning specifically growing anti-immigrant sentiment, war, religious persecution and famine.

But the bulk of his talk was devoted to the abuse crisis and the obligation to address it clearly and decisively.

Pope Francis has called the presidents of the world’s bishops’ conferences, the heads of the Eastern Catholic churches, and leaders of religious orders to a meeting at the Vatican Feb. 21-24 to discuss the scandal.

The meeting, he told the Curia officials, will reaffirm the church’s “firm resolve to pursue unstintingly a path of purification” and, with the help of experts, will examine “how best to protect children, to avoid these tragedies, to bring healing and restoration to the victims, and to improve the training imparted in seminaries.”

“An effort will be made to make past mistakes opportunities for eliminating this scourge, not only from the body of the church but also from that of society,” he said, noting that sexual abuse is a problem not only within the church.

Many Catholics have accused the media of covering the abuse scandal in a way that gives “the false impression that this evil affects the Catholic Church alone,” the pope said. But he added, “I myself would like to give heartfelt thanks to those media professionals who were honest and objective and sought to unmask these predators and to make their victims’ voices heard.”

“Even if it were to involve a single case of abuse — something itself monstrous — the church asks that people not be silent but bring it objectively to light, since the greater scandal in this matter is that of cloaking the truth,” he said.

Without naming names, Pope Francis also referred in his speech to those who betray the church by hiding “behind good intentions in order to stab their brothers and sisters in the back and to sow weeds, division and bewilderment. They always find excuses, including intellectual and spiritual excuses, to progress unperturbed on the path to perdition.”

In this speech, Pope Francis said clerics sullying each other’s reputations “is nothing new in the church’s history. St. Augustine, in speaking of the good seed and the weeds, says: ‘Do you perhaps believe, brethren, that weeds cannot spring up even on the thrones of bishops? Do you perhaps think that this is found only lower down and not higher up?'”

Those entrusted with roles of leadership and responsibility in the church must be vigilant, he said.

“In effect, the strength of any institution does not depend on its being composed of men and women who are perfect — something impossible! — but on its willingness to be constantly purified, on its capacity to acknowledge humbly its errors and correct them; and on its ability to get up after falling down.”

Christmas, he told the officials, “gives us the certainty that the grave evils perpetrated by some will never be able to cloud all the good that the church freely accomplishes in the world.”