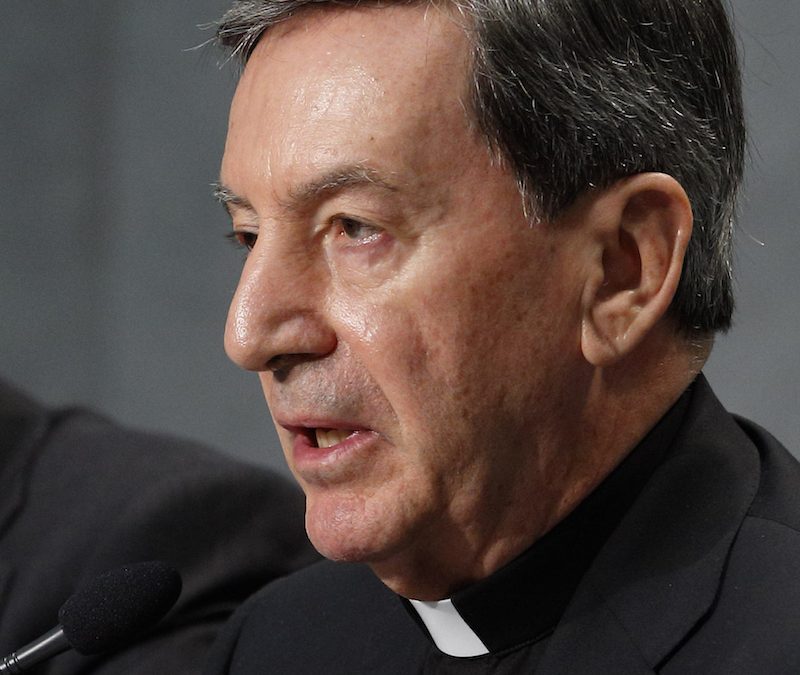 Cardinal Ruben Salazar Gomez of Bogota, Colombia, is pictured in an Oct. 26, 2015, photo. The abuse crisis in the Catholic Church is a call for bishops to unmask the deep-seated clericalism that placed protection of the institution of the church above the sufferings of victims, Cardinal Salazar said, addressing Pope Francis and nearly 190 representatives of the world’s bishops and religious orders Feb. 21 at the Vatican. (CNS photo | Paul Haring)

VATICAN CITY (CNS) — The abuse crisis in the Catholic Church is a call for bishops to unmask the deep-seated clericalism that placed protection of the institution of the church above the sufferings of victims, said the head of the council of Latin American bishops.

Addressing Pope Francis and nearly 190 representatives of the world’s bishops and religious orders Feb. 21, Colombian Cardinal Ruben Salazar Gomez of Bogota, president of the council known as CELAM, said that bishops must recognize that “serious errors” in the exercise of authority have “increased the severity of the crisis.”

“A brief analysis of what has happened shows us that it is not only a matter of sexual deviations or pathologies in the abusers, but that there is a deeper root too,” Cardinal Salazar said. “This is the distortion of the meaning of ministry, which converts it into a means to impose force, to violate the conscience and the bodies of the weakest. This has a name: clericalism.”

Delivering the third and final presentation of the first day of the Feb. 21-24 Vatican meeting on the protection of minors in the church, Cardinal Salazar spoke about the crisis in the church and the responsibility of bishops to face “conflicts and tensions” and instead act decisively.

The cardinal said that when faced with cases of abuse, a clerical mentality within the church has led bishops to act like salaried workers who “upon seeing the wolf coming, flee and leave the flock unprotected.”

“And we flee in many ways,” he explained. By “trying to deny the dimension of the denunciations presented to us; not listening to the victims; ignoring the damage caused to the victims of abuse; transferring the accused to other places where they continue to abuse; or trying to reach monetary settlements to buy silence.”

To understand the full depth of the crisis, he continued, bishops must stop looking at outsiders as the cause of the damage within the church and recognize that “the first enemies are within us, among us bishops and priests and consecrated persons who have not lived up to our vocation.”

Bishops, he added, must also stop minimizing the crisis by asserting that “abuses occur on a larger scale in other institutions,” because the existence of abuse outside the church “can never justify the occurrence of abuses in the church.”

“There is no possible justification for not denouncing, not unmasking, not courageously and forcefully confronting any abuse that presents itself within our church,” Cardinal Salazar said.

Bishops also have a responsibility to guide priests and consecrated men and women in their diocese toward holiness and establish a close relationship with them, beginning during the time of their formation.

However, when it comes to clergy and religious people who have abused, bishops must adhere to the protocols established by their bishops’ conference that respect both civil and canon law and help “to distinguish between sin subject to divine mercy, ecclesial crime subject to canonical legislation, and civil crime subject to the corresponding civil legislation,” Cardinal Salazar said.

Today, he said, “it is clear to us that any negligence on our part can lead to canonical penalties, including removal from ministry, and civil penalties that can even lead to imprisonment for concealment or complicity.”

Finally, Cardinal Salazar told the bishops that they have a responsibility to be close to the people of God and a duty to listen to them, especially those who have suffered abuse.

“One of the first sins committed at the beginning of the crisis was precisely not having listened with open hearts to those who charged that they had been abused by clerics,” he said.

Among the most egregious ways that some bishops have acted toward victims was by “minimizing the pain and damage” of the abuse by thinking that the only motive for survivors to report abuse was “to seek financial compensation.”

“‘The only thing they are looking for is money’ was the recurrent phrase,” the cardinal said. “There is no doubt that accusations are sometimes orchestrated. There is also no doubt that on many occasions attempts have been made to reduce the redress to the victims in terms of monetary compensation without taking into account the true scope of that reparation.”

Nevertheless, while money “can never repair the damage caused,” the church has a responsibility to offer compensation so that victims can afford psychological treatment and to provide economic support to those who cannot work due to the trauma of their abuse.

“The responsibility of the bishop,” he said, “is very broad and covers many fields, but it is always inescapable.”