Coach V and the way to be 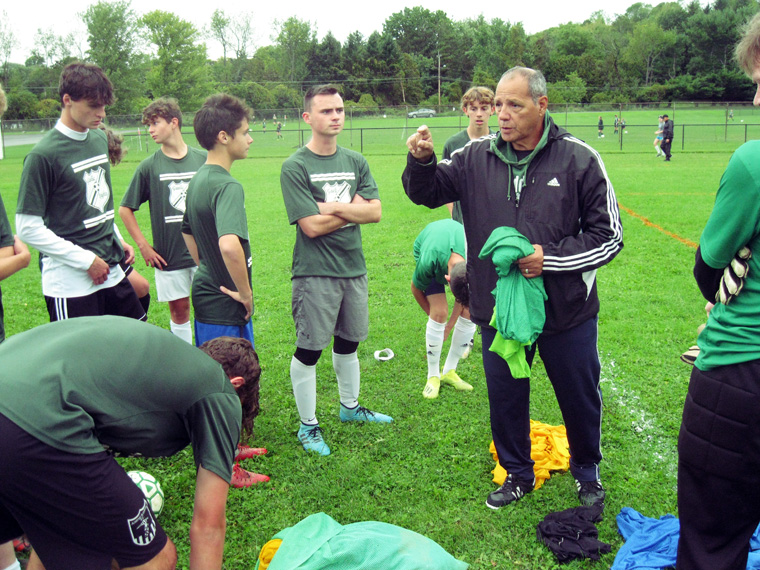 Icon of sportsmanship and dignity wrapping up career at Ludden

Just a good finish? It was perfect!

In one of his final soccer practices for the Bishop Ludden High School boys varsity, Coach Oscar Vergara saw a player kick a ball that ticked off the left post and snapped into the goal.

The four-on-four practice was turning into the Oscar Olympics, although the humble coach would never phrase it that way. The goalies also shined; one of them collapsed to the ground and artfully kicked the ball away in one motion.

Soccer balls were flying everywhere. When one came his way on the sideline, he kicked it away as if he were back on the Colombian playing fields of his youth.

For 43 years, he has been offering soccer demonstrations (he has been known to take on the goalie himself) and affirmation with an overall appreciation for his athletes, their parents, and the  school.

“He’s not the type of person that likes to be in the spotlight,” said one of Ludden’s four senior captains, midfielder Noah Kerwin. “Very humble.”

But now Coach V, a Ludden alumnus, is stepping out of the spotlight with a little over 500 wins in a coaching career that includes two years at the former Assumption Academy, two years at Corcoran HS, five years at West Genesee HS, and about 37 years at Ludden.

“Coach Vergara has been a tremendous asset to Bishop Ludden for a long time,” Ludden Athletic Director Gallagher Driscoll said in an email. “He has taught our student athletes how to play the game; how to win and lose with dignity and class. He has always held them to a higher standard. He is an icon on and off the field. We are blessed to have him as our coach.”

Coach V is hopeful that a suitable replacement for him will be found by the end of the year.

When he was 17, Coach V arrived in Syracuse. The late Auxiliary Bishop Thomas J. Costello, who was then the superintendent of schools, awarded him a scholarship based on his need to get out of an at-risk environment in Medellin, Colombia.

In addition to coaching soccer, Coach V also ran the Big Brothers Big Sisters program for Peace, Inc. in Syracuse. Now he will continue his part-time job for Peace, Inc. coordinating activities for senior citizens. He took them apple- picking recently, and he planned an outing to see a play in Canastota.

“I love going to work every single day,” he said.

His love for soccer goes back to his boyhood playing the sport virtually every day. Now that he is retiring, an observer suggested that he should advise the Colombian national team.

But all would respect his soccer credentials. Recently, he won the 2019 High School Coach of Significance Award presented by United Soccer Coaches, which calls itself the world’s largest soccer coaches’ organization.

The award, which goes to only one recipient in each state, recognizes “members who are coaching for character, using the soccer field to teach life lessons.”

Additionally, Coach V was named the National Soccer Coaches Association of America New York State Private/Parochial School Coach of the Year in 1996, 2009, and 2016.

But he is not worried about the soccer world carrying on without him.

“I just hope that these young men right here, and as well as those who have come through our teams, that someday if they see themselves in a situation where [they’ve] been forced to make a decision, they can say:

“He’d rather us lose a game fairly than win a game cheaply,” said senior back (defender) Rob Sexton. 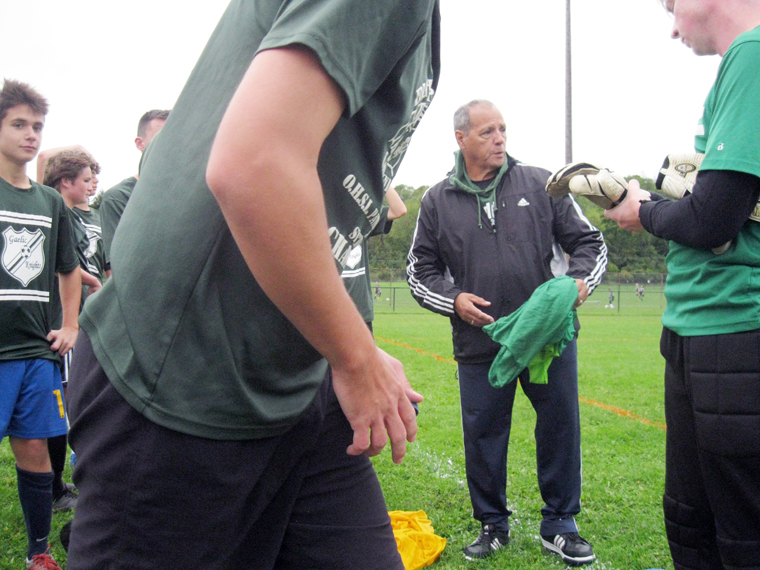 Varsity Coach Oscar Vergara has been a fixture on Bishop Ludden’s soccer field for about 37 years. As he leaves, he is pleased with the program the Gaelic Knights have built. For example, the modified program this year has about 23 participants who will be moving up eventually. (Sun photo | Tom Maguire)

At one point this season, Ludden had all four senior captains out with injuries. They are back now and “ready to lead,” Coach V said. The Gaelic Knights were 11-3-1 and the No. 3 seed heading into their opening sectional Class C game Oct. 23 against No. 14 seed LaFayette.

Sophomore Charlie Colella, a midfielder who was bothered by tendinitis in both knees, was on the sideline recently, but he is back at about 80 percent now.

Colella said of Coach V: “He doesn’t tolerate any bad behavior or anything like that, and he’s big on us being good people.”

As for soccer techniques, Coach V favors a lot of passing instead of relying on the long ball (“Joe has not touched the ball at all!” he yelled at practice. “Joe, you haven’t touched the ball, you gotta run to space and demand the ball.”); and also a lot of communication among all the players (“It should be, ‘I’m here, I’m open’”), not just by the goalie himself.

“He tells us that he wants the people who are at St. Camillus to hear us,” Liam Casey, a senior midfielder and one of the captains, said of the nearby rehabilitation center.

Exemplifying the Coach V way is Luke Infanti. He is only the third eighth-grader ever to play on Coach V’s Ludden varsity.

“He is going to be a magnificent player,” Coach V said, “and we have had some real good players here.”

Infanti scored his first varsity goal in a 5-0 victory over Cato-Meridian. He used his off-foot, his right foot, to kick the ball in from about 18 yards away.

“He looked like he was embarrassed about it,” Coach V said.

He added: “Most kids would be out there celebrating; he was just like, What did I just do?”

His players, he said, “don’t over-celebrate; there are teams that have their players do dances out on the field and this and that, or point fingers; we don’t do that. No. Our theme is sportsmanship above all.”

Years ago, an eighth-grader who  played for Coach V’s varsity stepped up to take a penalty kick to decide a sectional game. As Coach V remembers it, an opponent on the sideline yelled: “‘Hey, kid, make sure your diaper is on right.’”

But soccer babies grow up quickly in Coach V’s world. The eighth-grader made the kick and won the game. However, he then looked at the heckler and made pistol-like hand motions: “Pfff, pfff,” Coach V said, re-creating the imaginary sound of poor sportsmanship.

Coach V told that eighth-grader to never, EVER, EVER do that again.

Eighth-grader Infanti, who plays left-middie with the ability to shift to striker and center-mid, also embodies the technical skills taught by the coach.

“It went … on the end line, and we went in for a corner kick, and I think one of my teammates, Charlie Colella, crossed it in, and one of the kids on the Cato team headed it down to me, and then I just took a touch and then just put it top corner.”

He added: “At first I was kind of in shock, but I just wanted to keep going and win the game for me and my teammates.” They gave him a high-five without any overdone display that would make their coach want to crawl into his large sack of soccer balls and hide.

In the same game, Infanti saw Charlie make a run down the line, so he sent him the ball and got the assist on Colella’s goal.

In the Gaelic Knights’ next game, a 6-1 victory over LaFayette, Infanti sent a penalty kick into the bottom left corner of the goal: “I do a slow run-up but take many steps and then I just hit it hard low left corner every time.”

Asked how the soccer world will get along without Coach V, Infanti said:

Like Coach V, Sexton is impressed by Infanti’s dignity: “The most mature middle-schooler I’ve ever met. He’s the most humble soccer player I’ve ever met. … He can dribble through anyone, but he won’t brag about it. He’ll just be like, What did I do wrong with that play?”

“One of the finest kids I’ve ever coached,” Coach V said of Sexton, one of the captains.  “He’s very polite, he’s a very good ballplayer.”

The coach who believed

This year midfielder Kerwin entered the season in his best shape ever but was hurt in the first game, a 3-2 victory over Bishop Grimes. He’s back now.

Kerwin remembers coming in as a ninth-grader as a pretty small kid, not very strong, with foot skills that needed improvement.

But Coach V, he said, “just kept pushing me to get better. He believed in me and got me here today. … I’ve definitely improved because of him.”

The soccer world, he said, will “miss a very good coach figure, someone in the league who supports everyone, is nice to everyone.”

Being coached by Coach V, said Liam Mahar, a senior midfielder, “you remember all the important things in life, more than soccer. … Play fair and clean but always work for what you want.”

Midfielder Casey figures that the thing he admires most about Coach V is that “even if we’re beating a team — they’re not a good team — he doesn’t let us go above four or five goals; he always has respect for the other team no matter how good or bad they are.”

Casey added that Coach V won’t let players go above three goals, either: “He likes to keep it under control, respectable.”

He said that when he moves on to college, he will “definitely think back to the morals he teaches us — how to respect other people.”

How to judge him

His career is bounding toward a good finish.

“I’ve gotten emails, I’ve gotten text messages from former players wishing me well on this and also congratulating me on this latest award.”

Senior defender Sexton figures that his favorite Coach V memory is from his freshman year when Ludden won the sectionals: The coach was “overjoyed, and I’ve never seen him filled with so much happiness. …

“It seemed like his mouth would be tired at the end of the night about how much he was smiling.”