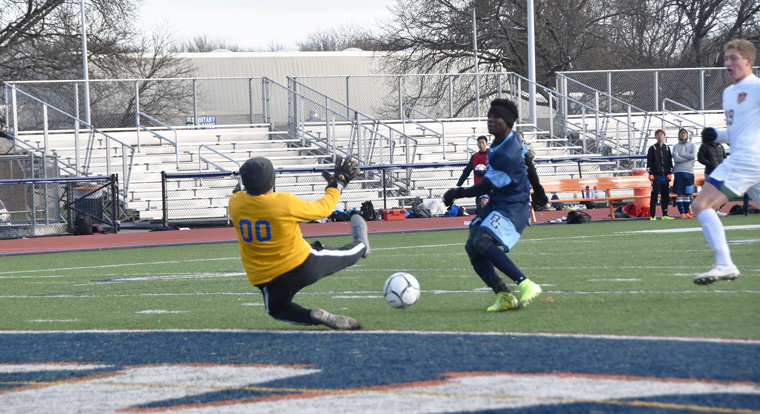 For the Bishop Grimes team, the light show beat the sound effects as soccer staged its playoffs.

In a night game Nov. 5, the Cobras won their first ever sectional soccer title at Vernon-Verona-Sherrill’s fancy stadium, where the bright lights flickered for goals — two by Grimes and only one for Westmoreland-Oriskany.

That victory sent the Cobras to the Class C state regional game against Lansing on Nov. 9 in Liverpool, where a recording of a train whistle greeted goals on a windy, frozen afternoon. But the whistle turned into a mournful tune with about 35 minutes left — Lansing kicked the ball off the right post and into the goal to win 3-2.

“I thought we played hard, we played like we wanted it,” said Grimes Coach Timm O’Connor. “We played a team that is well organized and very skilled. There’s a reason they are two-time-defending state champs, and we just lost to a better team today.”

But four days earlier, O’Connor’s Cobras had exulted amid the flashing lights at V-V-S. Grimes goalie Matt Tarby served as the videographer at the end of that sectional final, recording the yelling and whooping as the Cobras defeated Westmoreland/Oriskany for their 15th win in a row. Tarby finished that game with 16 saves.

“We had as big a crowd as we’ve had all year, and they were loud, they were vocal,” said Coach O’Connor, whose frisky team dumped water over him to celebrate.

Thrilling the alumni too

“We had a lot of alumni that showed up,” he added, “guys that I’ve coached in the past. … It was really good to see them.”

After the game the Cobras received their sectional-title T-shirts and sizable medals. Grimes striker Jack Gutchess said the players bit down on their medals as they posed for a picture over by their fans. Gutchess noted that the sectional title will be added to the banner in Grimes’ gym.

“We started kind of slow,” Coach O’Connor said of the W/O game. “We were struggling a little, they were really putting pressure on our defense. I had to make a couple adjustments, and get us realigned, and once we calmed down and got into the half we started playing pretty well. And it was a really good half of soccer. Just back and forth, going both ways.

“Statistically, it looked like they dominated us early but by the time halftime rolled around it was pretty even.”

“At halftime,” said midfielder/forward Mugushu, a senior, “I looked at my team, and they looked nervous. … I told them that we’re all in this together, and we’re gonna win this together. So I told ’em: THEY want it bad, ’cause I could see in their face, they want it bad.”

Coach O’Connor said W/O was fast and organized: “You could tell they really wanted this.”

“We expected an extremely challenging game from Grimes,” W/O Coach Gil Palladino said in an email, “one that would require us to bring our ‘A game’ and I think we did. Unfortunately, our ‘A game’ wasn’t quite good enough to win. We played with as much heart and determination as we could but in the end, the Cobras were simply the better team.

“We have not come across three such dynamic playmakers as they have in #6 (Jack Gutchess), #8 (Mugushu) and #10 (Deng Mawien) all on the same team and while we could contain one or even two of them during an attack, behold the third one was running free.

“I told the players in the handshake line at the end of the game that they represent our section quite well and we are rooting for them against Lansing.”

“I really like their coach …, the things he said to me after the game,” Mugushu said.

Mawien, also a senior, was delighted with Coach Palladino’s gracious words as well: “Not many coaches say that when you go to shake their hand. … ‘Win it for all of us here.’ I was happy for that. I gave him a hug for that too.”

Mugushu and Mawien both hope to play college soccer, Coach O’Connor said. He had said previously that for both players, soccer is a “way of life.”

Mugushu had told his teammates: “If you guys defend this game [against W/O] …, we’re gonna win this game. And they for sure did that and we ended up winning the game.”

Mugushu and Mawien, also a midfielder/forward, were willing to help out on defense, where Grimes employed sophomore Stephen DiBlasi, eighth-grader Patrick Nimineh, and sophomore Nicholas Walsh.

“These guys did a great job,” Coach O’Connor said.

“The two of them play that central midfield on top of our defenders,” Coach O’Connor said, “and we have Josh Kochinski and Louis Pelose who play on the outside and do a really good job of trackin’ the other team’s outside players.”

He added: “It’s also great to have somebody like [goalie] Matt at the back of it all, making a great save when we need one.”

Against W/O, the Cobras changed their attack, moving down the sideline a little bit more, sharing the ball better, and getting some really nice chances, the coach said.

But he noted that even with that, W/O scored first, about 10 minutes into the second half. Grimes striker Gutchess said he took a shot but the goalie made a nice save, and then W/O went down the field and scored.

Mugushu said W/O gave a through-pass and Grimes’ defenders were confused.

No Cobra ended up kicking the ball, striker Gutchess said, so W/O’s Christian Uvino just ran right through and scored on an open-goal shot with 31 minutes left in the second half. It was only the second goal that the Cobras had allowed in their sectional run.

Grimes striker Gutchess evened the score at 1-1. Two defenders looked at each other to see who was going to kick it, he said, so he ran between them and took a shot from the corner.

“I just tried to kick it as hard as I could, because I was pretty close to [the goalie],” he said. The ball went over the goalie and into the goal.

“It was a very narrow angle,” Coach O’Connor said, and the ball went just under the crossbar.

Tied at 1-1, the teams went into sudden-death overtime.

Two and a half minutes in, Grimes defender Nimineh cleared the ball, Coach O’Connor said, and Gutchess went to head it. It went over his head but he drew two defenders. The ball went to midfielder/forward Mawien, who turned and slotted the ball right through to Mugushu on the left side.

“Byam ran onto it,” Coach O’Connor said, “and took a couple dribbles and put it on the far side of the net.”

There was no tricky hesitation move by Mugushu this time, just speed, Coach O’Connor said. 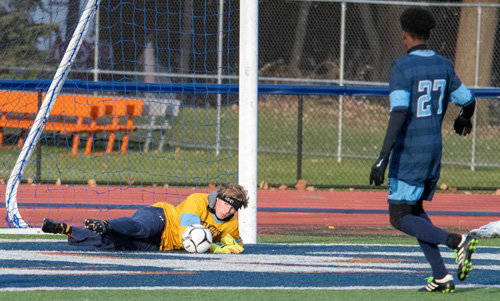 Bishop Grimes senior goalie Matt Tarby was active all day making saves in the state regional game in Liverpool. His coach figures he must have made about 25 saves against Lansing. Tarby finished the season with about 162 saves. (Photo courtesy Rhonda Hawes)

It’s so automatic for him

He is serene as he waits for a pass, but his chartreuse soccer shoes fly as he races toward the goalie, and he shoots so instinctively that he can’t always remember which foot he scored with. He finished a spectacular season with 39 goals and 14 assists for 92 points.

That includes his brilliance in Grimes’  next game, the 3-2 state-regional loss to a team that dominated play in the second half — Lansing, which now moves on to the state Final Four.

Lansing passes the ball and breaks up plays with stunning sophistication.

“They looked like a college team,” Coach O’Connor said.

In the regional game on that freezing day in Liverpool, Grimes’ Mawien got kicked a couple of times and he suffered a twisted ankle; he declined taping of the ankle because it could inhibit his shooting with his pink soccer shoes.

“Deng takes a lot of abuse, he really does, just because he’s got the ball on his foot so much,” Coach O’Connor said.

Lansing scored again at about the 12-minute mark to take a 2-1 lead.

But then Mugushu was fouled in the 18-yard penalty box, and the ball was placed down for his penalty kick.

He sized it up briefly and blasted the ball, which rebounded off the goalie right back to him. Mugushu simply lofted it over the goalie to tie the game at 2-2.

Coach O’Connor figures Grimes goalie Tarby must have made around 25 saves. He was constantly pounded by Lansing’s clever passers and shooters. Tarby, who is around six feet tall and can dunk a basketball, at one point leaped so high his hand appeared to go over the crossbar. He tipped the ball over the goal for one of his many sensational saves. All day he dived, leaped, and crouched to stop the ball.

In the first half, Coach O’Connor said, Tarby did a split to stop a ball and injured his hamstring. Yet he was also brilliant in the second half.

“I told him that was one of the greatest one-legged displays of goaltending I’ve ever seen,” the coach said.

Tarby finished the season with about 162 saves and a save percentage of around 85 percent.

Asked if he had ever seen pressure like Lansing’s attack, Tarby said: “No, they had the ball at our end the whole second half.”

Regarding those amazing saves he made, he said: “Good positioning, just trying to keep my team in the game. … Defense helped too, getting the people, cutting the angles off.”

Summing up the sectional title, he said, “Amazing, the best. Can’t explain that. … Felt so good.” A senior, now he will focus on getting stronger and better at baseball; he will pitch for Le Moyne College next season.

“It was a great game,” said striker Gutchess, a junior who finished the season with 17 goals and four assists. “Matt did a great job in goal, couldn’t ask for a better performance from him. … They’re a great team, all the credit in the world to them. The great passing, we just couldn’t really get it going offensively. …

“They were just sharp, just sharp as an arrow, just didn’t make mistakes; we couldn’t get any turnovers and if you wanted to play the ball through you had to play it perfectly or they were going to be there.”

Now Gutchess, who is six feet, four inches tall, goes into Grimes’ basketball season as a sectional champion in soccer, knowing that he has already been through close games at the sectional level.

He said: “It’s an amazing feeling; there’s no other group of guys I’d rather win sectionals with. I love these guys, and it was just a great season — my first sectional I’ve ever won, something I’m going to remember the rest of my life.

When they add this Grimes soccer team to the banner in the gym, perhaps they should flicker the lights twice — a throwback to Nov. 5 at V-V-S.