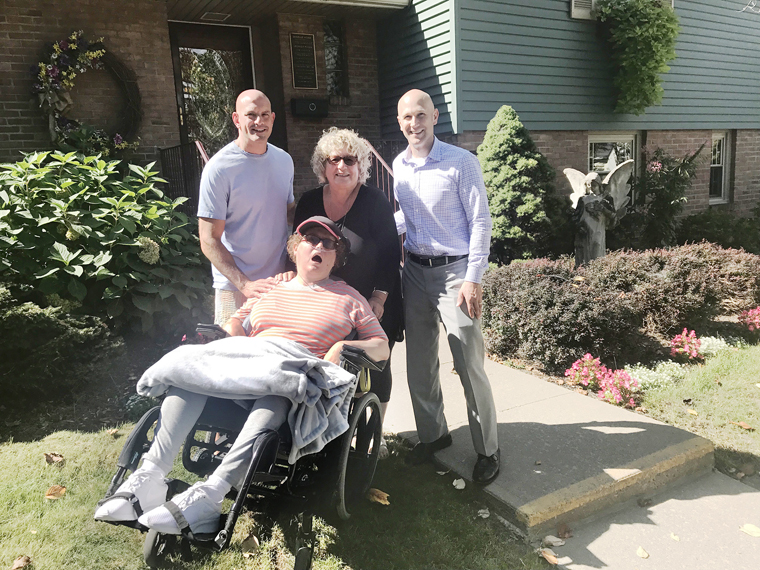 By Kathryne A. Sparaco

When Diane Stento received the call on Nov. 4, 1989, that her daughter, Danielle had been critically injured in a car accident, she had no idea that so much good would come out of such a tragedy. But now, 33 years later, she is celebrating the 20th anniversary of opening the doors of Danielle House, which provides a home and support for out-of-town families if they have a loved one who will be in one of the Binghamton-area hospitals for an extended period of time.

Danielle Stento was a senior at the University of Buffalo who dreamed of being a teacher when she was struck by a drunken driver and sustained a brain-stem injury while walking with friends one evening. The Stento family lived three and a half hours away in Binghamton, but they immediately left for Buffalo with no plans to return home until their daughter was discharged, even though they had no place to stay. “We stayed anywhere we could at first,” Diane recalls. “And then people from the university who knew Danielle came to us and begged us to stay with them.” That kindness and stability helped the Stento family through their ordeal of not knowing what the outcome would be for Danielle. “You’re living minute to minute and there is such a fear of the unknown, so to be in a home setting is so necessary. That’s how you can regain God’s strength.”

After months in the hospital, Danielle spent one year in rehab in Cortland, an hour away from the family home. The Stentos made that trip every day to give Danielle the love and support she needed. A year later, they were finally able to take her home. That was when Diane knew she wanted to use her experience to help others. Not only did she begin speaking out in the Binghamton area against DWI, but she also had the dream to offer shelter and emotional support to people who had been in her situation; people who found themselves away from home and searching for a place to stay so they could remain with a loved who was being treated.

In honor of Danielle, Danielle House opened in Binghamton with four bedrooms (it now has eight) on Jan. 22, 2002. It has provided hope, healing and compassion for families finding themselves in the challenging situation that the Stento family knows too well. “What we experienced is what our guests experience and to have someone care about you just means so much,” Diane shared. “Whatever is going on in their lives, there is love here. We just want people to feel love and have a real family. And we become that family.”

The house has not only helped its many visitors; it has helped the Stento family as well. “This outcome was the furthest thing from my mind at the time of the accident,” Diane recalls. “Danielle had so much to offer the world and to see that all end was so hard. But something truly beautiful came out all of this, and it’s really helped our family to heal.”

Danielle still lives at home with her family and requires a great deal of care, but she understands the impact she and her story have had on the community and knows she did become the teacher that she always wanted to be. “She is teaching in a more spiritual way. Through her story, others have learned so much. I know her story has saved lives,” Diane said.

The Stento family now looks forward to the next 20 years for Danielle House and hopes the house continues to do exactly what it’s doing. Diane attributes the success to board members, volunteers and donors. “It takes a community to do something like this and I have a great one. Thank you to all of you who believed in us and our mission. We’re doing God’s work. We really are.”

Kathryne A. Sparaco is the Administrative Assistant for the Office of Vicar General, Chancellor/Director of Communications, Vicar of Religious and Synodal Planning, and Director of Facilities.