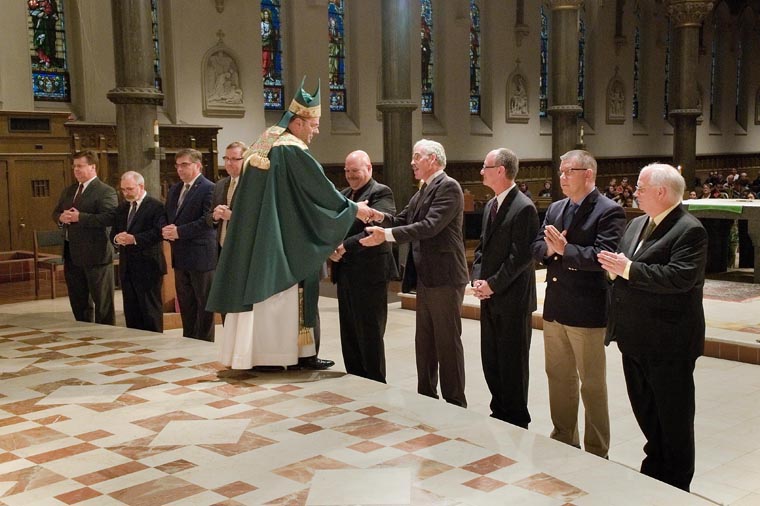 They are the brothers of the bridge, and they are walking with one another on the road to the permanent diaconate.

Twelve candidates are being prepared to serve as a bridge between the altar and what happens in the world, said Father Louis F. Aiello. The men themselves say that halfway through the four-year program, they have bonded. “We all call one another brothers now,” said David Schiltz, of Minoa.

This brotherhood underwent the Rite of Candidacy Conferral on Oct. 9 at the Cathedral of the Immaculate Conception in Syracuse. Bishop Robert J. Cunningham officiated at the ceremony, which prepares the men for the final two years of the program.

Schiltz was joined by Mark Berube, of Pennellville; Jeffrey Dean, of Pennellville; Thomas Grigson, of Camillus; Scott Harris, of Camillus; Brian Lauri, of Clay; Anthony Miller, of Binghamton; Terrence O’Loughlin, of Pulaski; Michael Ruf, of Liverpool; and William Wilson, of Clay. They have undergone canonical review by the deacon-formation committee as they continue toward ordination in the spring of 2018.

Two other men are also in the program:

Richard Thornton, from Latham, is studying for the Eastern Rite Maronite Church. He received the order of SubDeacon, paralleling the Latin Rite Church’s Rite of Candidacy, this past spring.

Guillermo Castro, of Binghamton, has already received Candidacy from former Bishop Gerald F. Kicanas in the Diocese of Tucson, Ariz., on April 12, 2015. He and his family relocated to the Binghamton area this spring. He will complete his formation with this class of 2018 to serve the Diocese of Syracuse.

When they become deacons, these men will mobilize the resources of the Church to help those most in need, said Father Aiello, director of the diocesan Permanent Diaconate Office.

“As men chosen for the ordained ministry, they will have a special role as ministers of the Church to strengthen the faithful by word and example, and gather them together to share in the Eucharist,” Father Aiello said.

Schiltz comes to the program having seen a great deal of the world. Driving to an Air Force assignment in Alaska, he drove hundreds of miles by himself, taking in the mountains, streams, animals, beautiful country, and fresh air. He said it opened his eyes to what God has created.

After 20 years working in logistics, he retired from the Air Force in 1999 and returned to Syracuse, where he was born and raised. He took civilian jobs and kept having eye-opening experiences.

Schiltz worked for six years at the Motherhouse at Grant and Court streets, and he saw the Sisters of St. Francis “live out their faith every single day.”

That experience, in turn, led to an opportunity to work in youth ministry at his parish, St. Matthew Church in East Syracuse. During the Formation for Ministry program, he said, “I knew that the Holy Spirit was calling me to be a deacon.”

He envisions the diaconate as proclaiming the gospel. “You take it out to the street,” he said. “You have to live it by your actions and how you react to people and how you treat others. It’s a very humbling experience. … It’s never about us, it’s about doing the work of Jesus, and you have to be very humble to do that. You’re not looking for anything in return for yourself, you’re doing God’s work.”

Deacons are called to do many things, Schiltz said, and he will go wherever God leads him.

For example, he would be happy working with college students. “I’ve always worked with youth in my life,” he said. In his off-duty time, he said, he worked with teens on Air Force bases, helping them to stay out of trouble. He has also worked with young people in foster care.

Schiltz also feels it is important to bring the Eucharist to homebound folks in nursing homes, and to perform wake services.

“I would never limit myself,” he said.

Several of the deacon candidates have military experience, and Lauri is one of them. A  member of Sacred Heart Parish in Cicero, he has several jobs: lieutenant colonel in the Air National Guard, lawyer with a practice in North Syracuse, and town judge in Clay.

“And then God called me to do this,” Lauri said of the diaconate formation. He added: “He kept hitting me in the back of the head saying, ‘Hey, I’m talking to you.’”

Lauri said that all the deacon candidates “became really close,” and that includes the men with a military connection. Regarding the different military services, however, he felt compelled to add: “The Air Force is the best of all of them.”

The “bridge” analogy is appropriate, he said, because as people who are out in the world, the candidates can understand some of the problems that arise with families.

His leadership experience helps him, Lauri said, “but being a leader in the Church is a totally different forum. The stakes in the church are much higher. You’re talking about doing what we can do to help bring people to Jesus.”

Asked to give highlights from his formation so far, Lauri said, “One is an incredible depth of knowledge through all of our teachers: things from church history, to spirituality, to the rules of the Church.”

Another highlight for him is the collection of new brothers. “We’ve all become very close, which is wonderful,” he said.

A further benefit from the instruction is a great sense of empathy. “You’ve got to be able to walk with people where they are,” he said, “not where you think they should be.”

Harris also sees the candidates as a link between the secular world and the Church. “I think that’s really the crux of who we are and what we’re doing,” he said.

Harris is a member of Holy Family Church in Syracuse. He has been in the financial-services industry for 30 years, including the last four as a vice president of Key Bank in Syracuse.

One of his favorite activities for the parish is strengthening the family. He and his wife, Carol, have been involved in marriage preparation for over 13 years at Holy Family. He said they enjoy giving people the “tools to live out their marriage in the Catholic Church.”

Harris noted that a root word of “deacon” is the Greek word diakonos, which means “servant.”

The idea for the deacon candidates, he said, is to serve the bishop, the pastors, and the parishes. “So I think all of us have taken that to heart,” he said.

Harris knows that in two years if all goes well, there will be much jubilation among the 12 new brothers of the diaconate.

“There’s no question the bond we’ve created is familial,” he said.