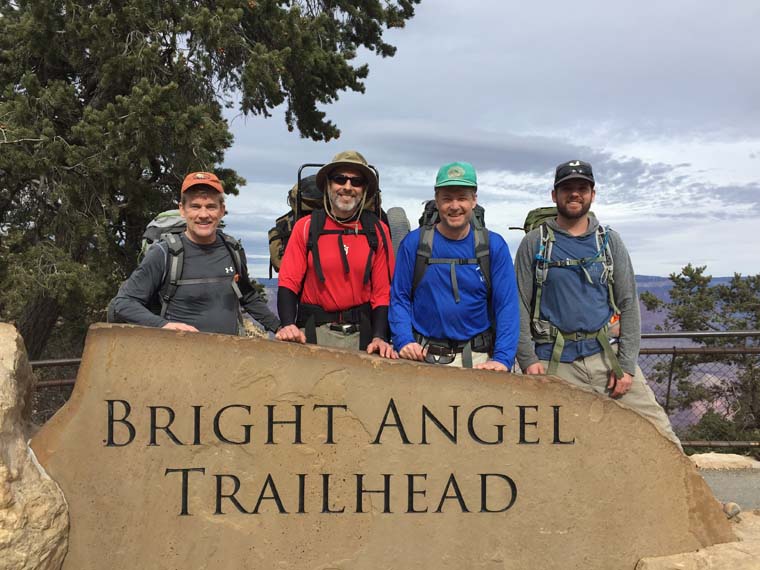 ALLENTOWN, Pa. (CNS) — The beauty of the great outdoors and the spirit of God that it exudes came into full view for three priests of the Diocese of Allentown who experienced the grandeur of the Grand Canyon in the fall.

The priests, Father John Gibbons, pastor of Sacred Heart of Jesus in Allentown; Father Patrick Lamb, pastor of Queenship of Mary in Northampton; and Msgr. Thomas Orsulak, pastor of St. Peter the Apostle in Reading, said they came away with a deeper appreciation for creation and the beauty of the planet knowing that God made it all.

From seeing 1,000-year-old Anasazi pictographs and looking at the brilliance of the Milky Way in the crystal clear night sky to celebrating Mass 1,500 feet above the Colorado River, the priests were happy to share the time together and bring their experiences to their parishes.

“Hiking into the Grand Canyon is like being swallowed up in the grandeur of God,” Father Gibbons told The A.D. Times, diocesan newspaper.

Father Lamb was equally awestruck by the western landscape even though he had previously visited the Grand Canyon.

“The beauty of the Grand Canyon is difficult to put into words. When I first saw the Grand Canyon back in 1979, it was the first time I understood what the term ‘breathtaking’ meant. The beauty and size and grandeur of the canyon is magnificent,” Father Lamb said.

“Two things stood out for me. One is the beauty of the sky and stars at night. The stars seem to be right in your face. It is so dark. The Milky Way is brilliant. It makes one feel very small and humble.

“We went to a place at the canyon called Plateau Point. We watched the sunset on the canyon. Again, this is hard to describe. The canyon looks different as the sun goes down. The colors change constantly and are very beautiful.

“We celebrated Mass in a secluded spot. Talk about a God-given beautiful cathedral,” he said.

The Mass was a highlight for all three priests.

“As Father Lamb said, no cathedral could be more beautiful,” Msgr. Orsulak said. “We each got a little time to pray on our own each day, each going off on his own after we set up camp in the afternoon and before we left camp in the morning.”

The trip was several years in the making.

Father Lamb said he made a similar trip three years earlier with his nephews and brother-in-law. “It was fantastic. Since Msgr. Orsulak and Father Gibbons and I had hiked some of the Appalachian Trail before, I called Msgr. Orsulak on my way home from the Grand Canyon telling him how wonderful it was and how we should do it. It took three years to set it up, but we finally got to go.”

Father Lamb’s nephew, Tim DeCapite, is a dermatologist who works at the Navajo Indian Reservation in Yuba City, Arizona. His wife Megan is a pediatrician there. He served as a guide for the priests.

“They have been out there for eight years, and will be returning to Maryland, where they are originally from, in August 2018,” Father Lamb said.
“Tim has been on every trail on the South Rim of the Grand Canyon and was an excellent guide for us.

For Msgr. Orsulak, in addition to the Mass trip highlights included meeting DeCapite’s family, as well as spending 48 hours with him while hiking 20 miles; seeing the green color of the Colorado River for the first time and finally reaching the river.

“Tim pointed out 1,000-year-old Anasazi pictographs only moments before we gained the rim at the end of the hike,” he said.

The trio trained before leaving on their trip Nov. 12, hiking part of the Appalachian Trail in Pennsylvania.

During the priest convocation in Hershey prior to the trek, the priests hiked a few hours to the top of the ridge upon which the Appalachian Trail is located.

“There is some prep involved in terms of getting in shape, a lot of walking with a backpack on with weights in it. Being in shape helps to make the trip more enjoyable,” Father Lamb explained. “That way you’re not hurting the whole time from carrying the backpack. So in Hershey at the convocation, we decided to hike part of the Appalachian Trail in Harrisburg to get in shape.”

Father Gibbons planned to share what he saw and learned in Arizona — the history, the sites, the presence of God during Mass on Plateau Point — with his parish.

“That point is not just out in that spectacular point in Arizona, but somehow in our dear Lord,” he said. “All of this is inside every Mass in which we all participate back here in our parishes in the Allentown Diocese.”