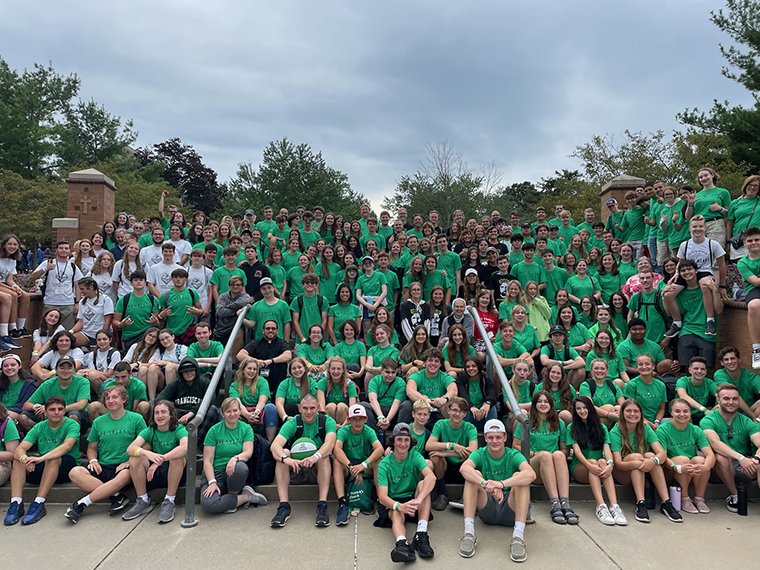 “Powerful!” This is the word that Brittany McCanney, Confirmation Coordinator at Sacred Heart Church in Cicero, used to describe the Steubenville Summer Conference that she attended as a chaperone with the parish’s Youth Group. The conference was attended by well over 150 ninth through twelfth graders from around the Diocese of Syracuse. It was held July 15th-17th at Franciscan University of Steubenville in Ohio. The theme of this year’s conference was Fearless, with a focus on how to be fearless in your faith journey. Each day consisted of Mass, talks from top-tier speakers, small group discussions, and many opportunities to meet Jesus in the Sacraments. The Diocese sends a large group each year.

“It is consistently effective because it focuses on a personal encounter with Jesus through the Sacraments. And when it’s over, they still want to follow him,” said Bob Walters, the Director of Adolescent Catechesis and Discipleship.

Eight local youth groups traveled with the Diocese, and another five local groups went on their own to allow for a more custom schedule. But once the conference began, it was truly one group. “The local groups that went on their own went the same weekend the Diocesan Group did, so it offered us a unique opportunity to bond and still have the experience together,” Walters said.

Kelly Ranous and her son Emmet attended the conference for the first time with the youth group from their parish, St. Elizabeth Ann Seton in Baldwinsville. Kelly had not planned to go but decided to attend when she was asked to chaperone, and she was glad she did. “I am so thankful to have been asked to chaperone. I was able to experience the conference with my son and an incredible group of young women,” she shared. She felt the conference was amazing, especially the Eucharistic Holy Hour and Procession, and discussions that she led with the youth after the talks. “Not only did I take something away from each session I attended, but I also gained so much insight from small group discussions and conversation in between sessions. Overall, it was a reaffirming of my faith that I wasn’t aware I needed. I would absolutely attend again.”

McCanney agreed that as a chaperone, one of the best parts of the day was the small group discussions. “It is a blessing to have the opportunity to listen to God’s children as they come together in small groups,” she said. “It was incredible to witness His Spirit moving in so many people, both youth and adults.”

Gianna Weaver attended the conference for the first time with the youth group from her linked parishes, St. Augustine and St. Mary of the Assumption in Baldwinsville. She said the experience was life changing. “One moment that stood out to me was Eucharistic Adoration. The priest walked down to our row with the monstrance and raised it directly above our heads to the point where I could reach my hands up and touch it if I really wanted to,” she shared. “Experiencing Jesus that close to me is something I will never forget. Being with people who are also ready to devote their life to Jesus is the best feeling. Steubenville is a truly powerful and emotional time, and one I will never forget.”