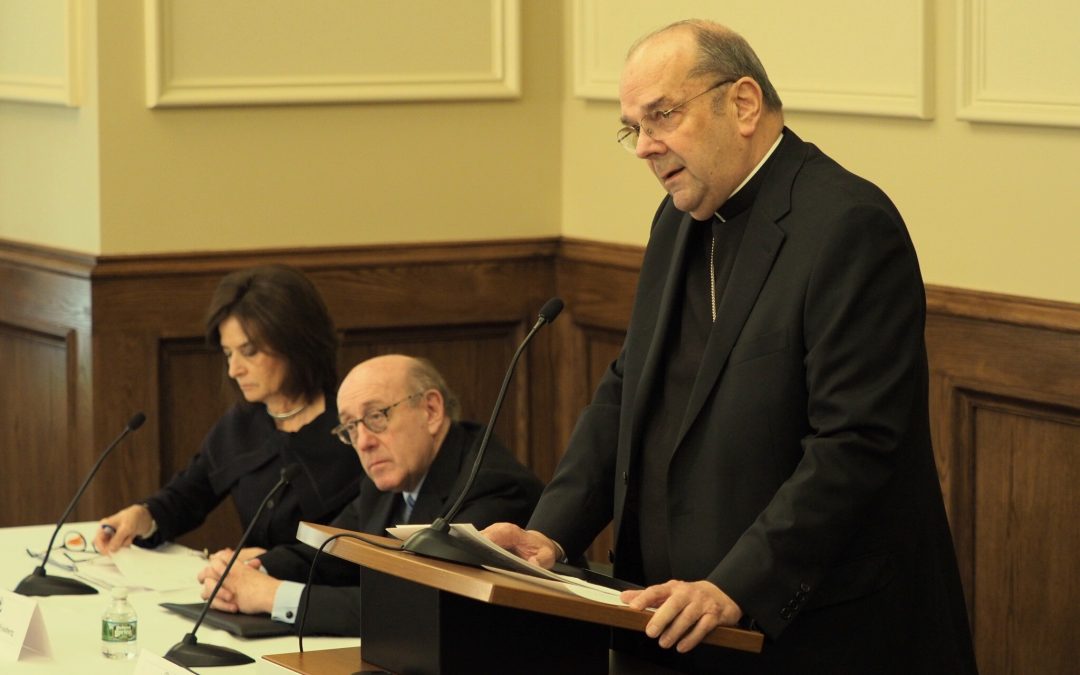 Bishop Robert J. Cunningham announces the establishment of the Diocese of Syracuse’s Independent Reconciliation and Compensation Program during a press conference at the Cathedral of the Immaculate Conception Feb. 14. Joining him are (from left) Program Administrators Camille Biros and Kenneth Feinberg. (Sun photo | Chuck Wainwright)

The Diocese of Syracuse has launched an Independent Reconciliation and Compensation Program “designed to offer reparation, promote reconciliation, and further healing to those individuals who, in the past, have been sexually abused by members of our diocesan clergy,” Bishop Robert J. Cunningham announced at a press conference at the Cathedral of the Immaculate Conception Feb. 14.

Through the voluntary program, independent administrators will determine monetary settlements for victim-survivors who have previously notified the diocese of their abuse by diocesan clergy.

Ash Wednesday was a fitting day to make the announcement, Bishop Cunningham noted in his remarks. “The ashes that we receive today are a sign of penance, biblical in origin, which express our human condition as affected by sin. In this sign, we outwardly express our guilt before God and we are prompted by the hope that the Lord is kind and compassionate, patient and understanding,” he said. “With contrition and hope in mind, I am announcing the establishment of an Independent Reconciliation and Compensation Program here in the Diocese of Syracuse.”

Calling the sexual abuse crisis in the Catholic Church “a horrific chapter in our history” that has “left an indelible mark on the faith lives of so many,” Bishop Cunningham apologized “for the pain and the suffering caused by some priests in this diocese.”

He emphasized the strides the Diocese of Syracuse has made over the last 15 years to ensure the safety of children: “reporting all allegations to the appropriate district attorney, ensuring that no priest with a credible allegation of abuse remains in ministry, and preventing acts of abuse through our highly successful safe environment program,” through which nearly 40,000 individuals in the diocese have been trained in child abuse prevention and criminally background checked.

The diocese has also provided survivors of abuse with counseling, spiritual direction, and other support, and reached settlements with roughly 20 individuals who were harmed, Bishop Cunningham said. “Even with this progress, there is no question we have made missteps in handling this crisis and we continue to look for meaningful ways to reach out to those who have been harmed decades ago,” he said.

Over the past year, the diocese has monitored the IRCPs of the Archdiocese of New York and the Dioceses of Brooklyn and Rockville Centre, Bishop Cunningham explained. “The response from survivors and their families has been extremely positive. We know and we acknowledge that we cannot reverse the damage that has been done in the past, but our hope is that this new effort will provide an opportunity to seek forgiveness for the irreparable acts of the past and perhaps bring a sense of healing to some,” he said.

Kenneth Feinberg and Camille Biros, who will administer the diocese’s program, joined Bishop Cunningham at the press conference. Their extensive experience in mediation and the administration of compensation programs includes the September 11th Victim Compensation Fund, the Gulf Coast Claims Facility – BP Deepwater Horizon Oil Spill, and the IRCPs of the Archdiocese of New York and the Dioceses of Brooklyn and Rockville Centre.

As independent administrators, Feinberg and Biros will “work with those who have previously notified the diocese that they have been harmed by a member of the clergy” and “retain complete and sole discretion over all eligibility requirements and agreements and the settlement compensation amounts for eligible individuals. The diocese will accept these determinations without question,” Bishop Cunningham said.

Only individuals who have previously reported their abuse to the diocese are eligible for the program at this time. Letters have been sent to 76 such individuals inviting them to participate in the program, Bishop Cunningham noted.

“This represents 40 priests over the decades who have been accused of abuse,” he said. “Most of these individuals are deceased and all have been removed from ministry.” Chancellor and Director of Communications Danielle Cummings later said 18 of those 40 priests are still alive.

Bishop Cunningham reiterated his stance on releasing the names of clergy accused of abuse. “Some survivors have asked me to release all of the names and others have asked me not to release the name of their offender. Therefore, we will confirm a name when the survivor makes it known, and in that way, I feel, I am honoring the requests of both,” he said.

The diocese will pay for settlements using funds from its general liability insurance program, Bishop Cunningham said. He emphasized the diocese “will not use money given by the people of the diocese to support parishes, schools, the annual HOPE Appeal, the Foundation of the Roman Catholic Diocese, the Cathedral Restoration Fund, Catholic Charities, or any other charitable fund” in the diocese.

Bishop Cunningham closed his prepared remarks by saying, “Allow me to make one thing very clear: Child sexual abuse is a grave sin and a crime, and no child is responsible for his or her abuse ever. We will not return to the mistakes of the past.”

Feinberg stated he and Biros are “honored by the request of this diocese and by Bishop Cunningham to assist in the design and administration of a compensation program. We take our assignment from the bishop very, very seriously.”

Feinberg directed interested individuals to the program protocol, which explains the terms and conditions of the program.

He underlined that the program is “purely voluntary” and that “nobody is required to submit a claim.”

Feinberg also reiterated the independent role of the administrators. Any decision they make regarding eligibility or compensation amount offered “is strictly in our purview, in our discretion. The church cannot, under the protocol… reject our decision, ask for an appeal, in any way try and block our decision. We are independent when it comes to evaluating and determining each and every claim.”

Answering questions from media, the bishop and the administrators clarified several points.

Bishop Cunningham noted any claims newly reported will be evaluated, but only previously reported claims are eligible for the program at this time. Feinberg explained that the program is focusing only on previously reported claims because of “resources. There’s only so much money available to distribute, and it’s very important that we prioritize those claimants who, for years and years, complained without any incentive to get compensated…. We feel, having discussed this with the church and the diocese — let’s start with those individuals who complained long ago and have not got any satisfaction.” Cummings added that any new claims coming forward would be addressed through the current reporting process — providing information to the appropriate district attorney, followed by the diocese’s canonical process where appropriate.

Victims who accept a settlement through the program will be required to sign a release waiving the right to future legal action. The release has no confidentiality requirement. Victims are free to disclose any details of their abuse and settlement. The program, however, will maintain strict confidentiality, Biros said.

Biros explained that, in addition to the 76 claims noted, about 50 additional allegations have been put forward to the diocese by someone other than the claimant; the administrators have the names of those individuals but will not reach out to them until the claimant contacts the program.

Bishop Cunningham said in closing, “We hope that through this process we’ll be able, again, to bring some hope and healing to some members of our community that have been suffering. And we also hope that it will bring hope and healing to the members of the church and for them to recognize that the church is trying to do its best to meet the needs of people who are hurting.”

This story will be updated and the Catholic Sun’s coverage of this program will be ongoing.

Learn more about the program at www.SyracuseDioceseIRCP.com.

Watch video of the conference from Syracuse Catholic Television below.