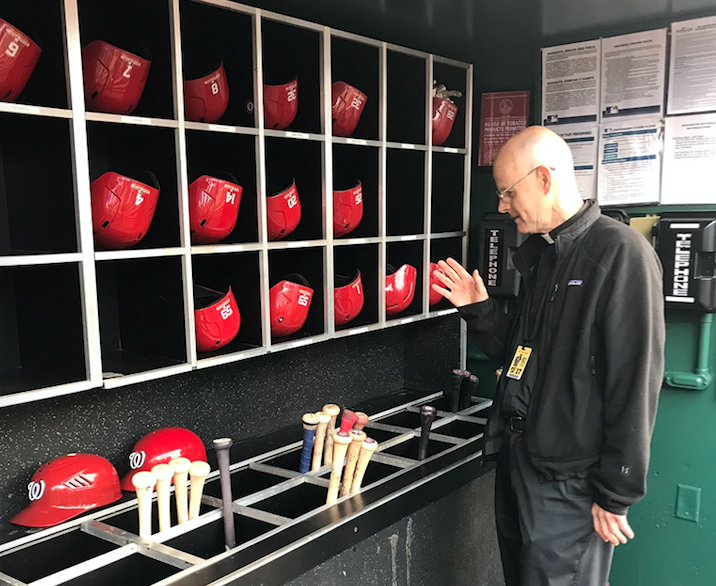 By Mary McCarthy Hines | The Catholic University of America

Ten years ago, Msgr. Stephen Rossetti was talking to the Catholic chaplain for the Washington Nationals before Mass. The priest was talking about how he needed to find a replacement chaplain because he was too busy. Msgr. Rossetti — who at that time attended games at RFK Stadium whenever he could — says he “jumped at the chance.”

As Catholic chaplain for the Nationals, Msgr. Rossetti, a priest of the Diocese of Syracuse who is a research professor in pastoral studies at the Catholic University of America, celebrates Mass for the players, coaches, and staff on Sundays when they are home. He has two priests who work with him, Father Andrew Fisher, pastor of St. Ambrose Parish in Annandale, Va., and Father Quinn Conners, O. Carm., a part-time faculty member in the CUA School of Theology and Religious Studies.

In addition to Mass, Msgr. Rossetti answers the call for other spiritual and sacramental needs.

“I have baptized their babies, done marriage prep, and helped them with other sacramental issues,” he says. “At the Mass, both teams are invited as well as any staff and coaches. It is a nice time when both teams can gather together before a game and pray together. When Mass is over, I notice how good the opposing teams are to each other, shaking hands and welcoming. It’s a nice witness of unity and mutual respect and esteem.”

As chaplain, he is also a source for many blessings. He has blessed bats, players with injuries, and those “just asking for God’s strength.” Msgr. Rossetti (who recently published a book on priestly blessings) says that as a priest, he tries to “bring the Church to those that don’t go to church anymore. To my surprise, almost all the players, Catholic and otherwise, are grateful and even seek out a blessing. It’s a beautiful moment which occurs often and I encourage priests everywhere to be generous in blessing people.”

Whenever he’s able, Msgr. Rossetti tries to be a regular and positive presence to the team. When things aren’t going particularly well, he says he’ll try to give that player a smile and an encouraging word.

“I remember years ago when the team was not doing well and at one point went 0-10,” he says.  “You could cut the gloom in the locker room with a knife. I made a point of stopping by and I recall one player picked up his head and said, ‘Boy, do we need you!’”

Just like they appear on TV, Msgr. Rossetti says the players, coaches, and staff are “a quality bunch of people and a joy to be with.” He says they genuinely enjoy each other and are having fun together.

At a team Mass this year, he delivered a homily on the virtue of hope.

“Early in the season, when we were 12 games below .500, it would have been easy to give up,” he says. “If they did, they would never be where they are today. In everyone’s life, there are difficult moments. Always, and especially at those times, we hope in God. We know that God is always with us, never abandons us. So, we never give up or give in. We, too, stay in the Christian fight until the end.”

Msgr. Rossetti is holding on to that hope for the Nationals a little while longer as the team heads to the World Series. He plans to continue to be a positive presence to the team and will celebrate Mass with them on Sunday. “Afterwards, I’ll be in the stands cheering for sure. And definitely thumbing my [rosary] beads and praying for the team.”

“I know God loves everyone and I pray for everyone,” he says. “But … I think God has a pretty good idea who I’m rooting for.”

Mary McCarthy Hines is Director of Communications and Media Relations for The Catholic University of America. This story first appeared on the CUA website and appears here courtesy of and with thanks to the author.