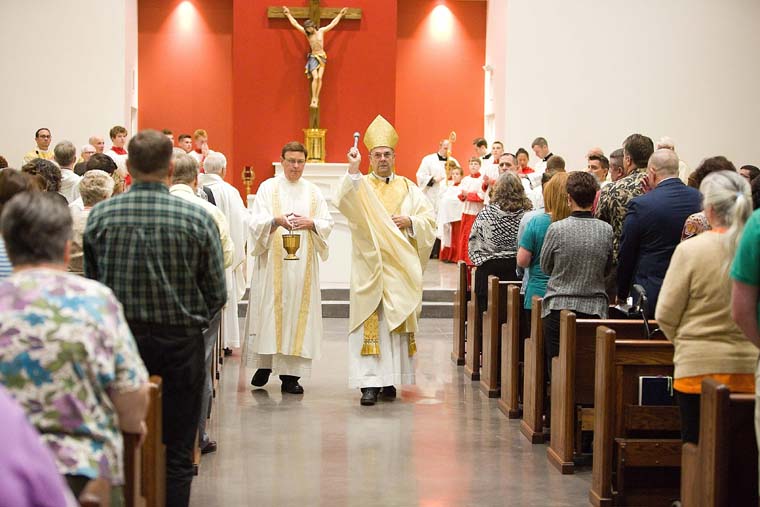 Church fills up for ceremony in Central Square

Central Square — Lines of people wrapped around the 7,000-square-foot Divine Mercy Church on the evening of Oct. 5 before a dedication ceremony for the renovated, expanded building.

Traffic snagged as drivers stopped for groups crossing the street. The church’s parking lots overflowed, and cars lined side streets, some people parking at Paul V. Moore High School a block away. A village police car appeared, and an officer began directing traffic.

Then, a flurry of clergy in cream-colored vestments appeared across the street, outside the former St. Michael’s Church, which now serves as a residence for Pastor, Father Christopher J. Celentano.

The men crossed the street and started to walk down the line of parishioners. “They’re coming way down here? How did we get so blessed?” one of the waiting women asked.

Bishop Robert J. Cunningham led the procession. Bringing up the rear was Father Celentano, or “Father Chris” as he’s known in this Oswego County village, about 20 miles north of Syracuse.

“Hey, thanks for coming,” he said to the children and adults. “Good to see y’all.”

“I hope you’ve got bleacher seating,” one man commented. Father Chris gave a thumbs up.

Inside, it was standing room only, people lining the walls beside the stained glass windows of St. Marianne Cope, St. Teresa of Calcutta, Pope St. John Paul II, and others, four lining each side of the spacious church. People filled the anteroom, too. The ushers estimated the number at 700.

Women gave up seats so that other parishioners who were less able-bodied could sit. Men held the wheelchair steady where a member of the Knights of Columbus was sitting so the man could stand up briefly. People made room for children to pass toward the front, or held youngsters in their arms. The faithful were dressed in their Sunday best, or maybe just jeans and a T-shirt.

“Here at Divine Mercy Church, you will find mercy,” Bishop Cunningham said. “Mercy made visible in Jesus. Go forth, and extend mercy to others.”

“May the word of God always be heard in this place,” the bishop said. “How lovely is this church. Lovely indeed is the place where God dwells. There is cause for great rejoicing. The beautiful cathedrals of Europe were built by the faithful. They used their skills, donated their time.”

At Divine Mercy, they gave their labors and their monetary gifts, the bishop continued. Their prayers provided support. The bishop praised Father Chris. “His has been a work of love and a work of art.”

The clergy stood at the altar, the walls a muted red behind a hanging statue of the crucified Jesus. The rest of the walls and ceilings are pure white. The circular stained glass window above the altar has a dove. It was inspired by one of the designs at St. Peter’s Basilica in Rome, Italy. Statues of St. Mary and Jesus flank the altar.

Stained glass windows pay homage to the history of the parish. The churches of St. Agnes in Brewerton and St. Michael in Central Square merged, and along with the Mission of St. Bernadette in Constantia and St. Mary’s in Cleveland, which is the oratory, formed Divine Mercy. Windows honor St. Agnes and St. Michael.

The path to this new church was one of both joy and loss, Father Chris said, speaking in an interview several days before the dedication. Parishioners prayed, then voted on a name for the new parish. It took three rounds of voting, but an early favorite was Divine Mercy. The new parish, with about 750 households, was established in 2013.

There was grieving; people whose ancestors had built the churches in Brewerton and Central Square gave up those buildings so something new could be born.

The rectory in Central Square and the church in Brewerton were sold, and the parish made plans to build a new church as an expansion of the parish hall, across Main Street from St. Michael’s. Work totaled $1.6 million, Father Chris said. Some money came from parish savings, but in this county with a median annual household income of $47,000, according to census figures, pledges provided the rest, he said.

“We realized if we need to be relevant as a Catholic church in the 21st century, we need to come together in the beautiful Catholic faith,” Father Chris said. Parishioners needed to keep some of the past with them, but also look forward, he said.

Father Chris said he was humbled witnessing the willingness of congregants to sacrifice. Paramount was prayer, he said. “We put God first, then the community second, then ourselves third.”

“It is a beautiful story of death and new life,” Father Chris said. “We’re resurrection people. If we are willing to die to self and see what God has in store for us, it gets even better.”