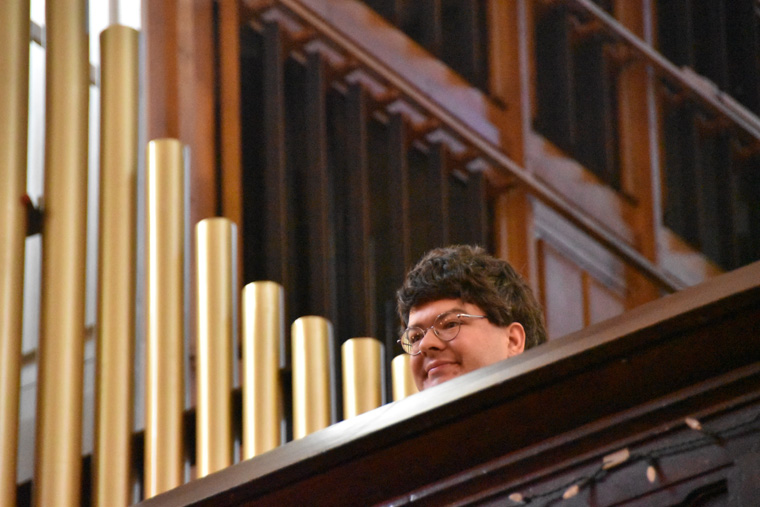 Dr. Embry bookends basilica recital with his own compositions

Taking in a legendary college campus while cycling to and from the practice hall inspired Dr. Jonathan Embry to compose one of the organ pieces he played in a recital Sept. 29 in Syracuse.

As he studied for his master’s degree in sacred music at the University of Notre Dame, the organist and composer would ride his bike from his apartment to practice late at night and into the morning, “experimenting with different sounds.”

He composed his Passacaglia in F minor Op. 4, which received honorable mention in the chamber-music composition division of the National American Prize competition. A passacaglia is defined as a piece that is played “typically in slow triple time with variations over a ground bass.”

Dr. Embry, 27, played the piece as his finale on the restored 1927 Skinner Organ Company Opus 669 at the Basilica of the Sacred Heart of Jesus. 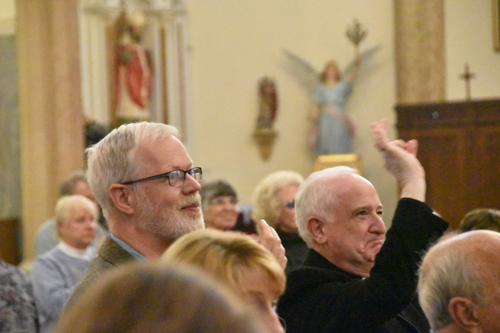 Joining the standing ovation for Dr. Jonathan Embry are, at left, Benjamin Merchant, president of Kerner & Merchant Pipe Organ Builders, of East Syracuse, the company that restored the basilica’s organ; and Father Joseph Clemente, administrator of St. Cecilia Church in Solvay and Our Lady of Peace in Syracuse.

The basilica wants to showcase the Skinner, which came from a former church in Syracuse and took two and a half years to restore. In June, two concerts were held on the restored organ, which boasts 2,431 pipes, and it was blessed by Bishop Emeritus Robert J. Cunningham.

Dr. Embry is the director of music at Most Holy Rosary Church, only two miles away from the basilica. He received his bachelor of music degree from Syracuse University, and this year he completed his doctoral program in organ performance at McGill University in Montreal.

He has toured in Russia, and in August he performed recitals in three cities in Lithuania.

His bicycling has carried over from his Notre Dame days; he also enjoys walking and being out in nature, and he is a fan of roller coasters.

“I thought it was a lovely program. I thought Jonathan picked his pieces well; they matched the organ well. And I thought he had a good sense of how the organ would sound in the room. In a big room like this it’s often easy to play pieces too fast or too slow, and he really did a nice job; it was a very fine program.”

Dr. Embry began with another of his own compositions: Rhapsody No. 1, The Bells of St. Isaac (2019), which impressed with its spellbinding lingering notes.

“The Bells of St. Isaac,” he said, “was inspired by my first concert tour of Russia. When I was in St. Petersburg, I was amazed by the beauty of the bells at St. Isaac’s Cathedral. The piece uses interlocking rhythmic ideas that are used in Russian Orthodox bell ringing which I adapted to the organ.

“The piece also has an original melody that is in the style of znamenny chant, which is a form of sacred music that is used in the Divine Liturgy. The ending combines ringing of bells over the chant as the service is ending. The piece to me is like a journal of my experiences in Russia.”

The second piece on Dr. Embry’s recital program was Paduana Lachrymae (The Dance of Tears), by Henrich Scheidemann (1595-1663), which showed the Skinner’s soulful side.

The third tune, Es ist ein Ros entsprugen (Lo, How a Rose E’er Blooming), was composed by Hugo Distler (1908-1942) and transcribed by Dr. Embry. It combines languid and sprightly elements.

The penultimate tune was Sonata No. 4 in A minor, Op. 98, I. Tempo Moderato, by Josef Rheinberger (1839-1901). The tune offers an exquisite quietness but also a cheerful frenzy of sound. 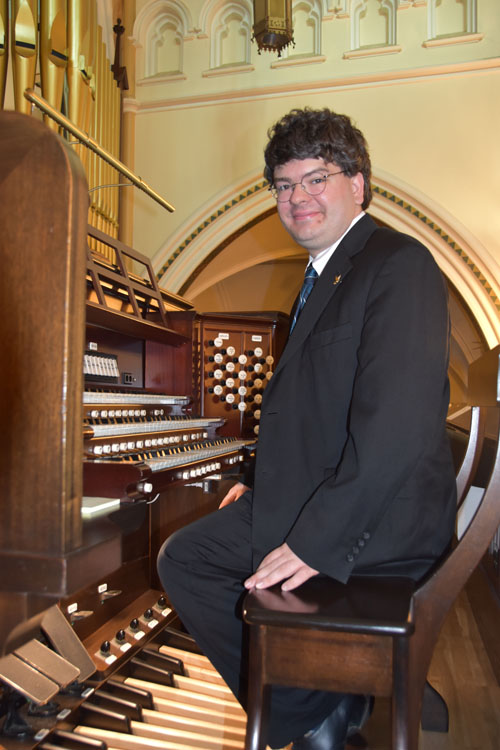 Dr. Embry concluded with his Passacaglia, which offers great emotion and drama.

“That’s why it has moments of strength and hope, but also moments of some despair, but then ultimately in the end everything is comfort.”

The piece is one of his earlier compositions, which is why it took about two years to write. “There’s been still some little edits that I’ve done to it through the years,” he said.

Asked if there was a specific transcendent experience that inspired part of Passacaglia, he said, “It was just being in such a place as Notre Dame; it’s a totally different world; it’s like you’re separated from everything in this very comforting place. …

“Actually I would say that the biggest sort of image that comes to mind when I think of this piece is the campus at night, when you can see the basilica and the Golden Dome lit up, and it’s very calm. The streetlights are there on the pathways, and there’s … some lighting, but it’s also dark.”

Also inspiring him was the “reflection of the basilica and the Golden Dome on the lake.”

Basilica Music Director Frank Schultz said: “Just an absolutely wonderful performance by Dr. Jonathan. … We can’t wait to have him back. … He showed off the organ, not only his talent, but he showed the organ off, which is what we wanted.”

Father Joseph Clemente, administrator of St. Cecilia Church in Solvay and Our Lady of Peace in Syracuse, is an organist himself.

“Jonathan Embry’s playing was masterful,” Father Clemente said, “and very musical, and I thought he showed some of the colors of the organ very well, and I was really impressed with his registration; he really understands the medium and the instrument. He understands the Skinner ethos, that sense of Skinner’s, his idea of the harmonic development of the instrument.”

Dr. Embry thinks the Skinner is a “very fine instrument, a great example of American romanticism. Kerner & Merchant did a fantastic job restoring it. It is well worth the money to have this fine instrument to inspire worship. It has beautiful sounds.”

The basilica’s rector, Father Andrew Baranski, said: “It was another spectacular evening of beautiful sacred, traditional, and contemporary organ renditions by Dr. Jonathan Embry, and we are happy to have him, and certainly we’re looking forward to more of those concerts as we still raise funds” to finish paying for the organ restoration.

The project cost hundreds of thousands of dollars. Contributions can be made by placing an envelope marked “ORGAN” in the Sunday collection; by sending a check via U.S. Mail to 927 Park Ave., Syracuse, New York, 13204; or by visiting www.sacredheartbasilicasyr.org — click on the word “ORGAN” and then the blue PayPal button to make a contribution via credit or debit card.

“It’s a powerful instrument,” Father Baranski said, “and everybody loves it. … You’ve heard the range. … The soft little bells to the big tubas. … Amazing.”