Dolan: ‘We are confident the Resurrection of Easter is unstoppable’ 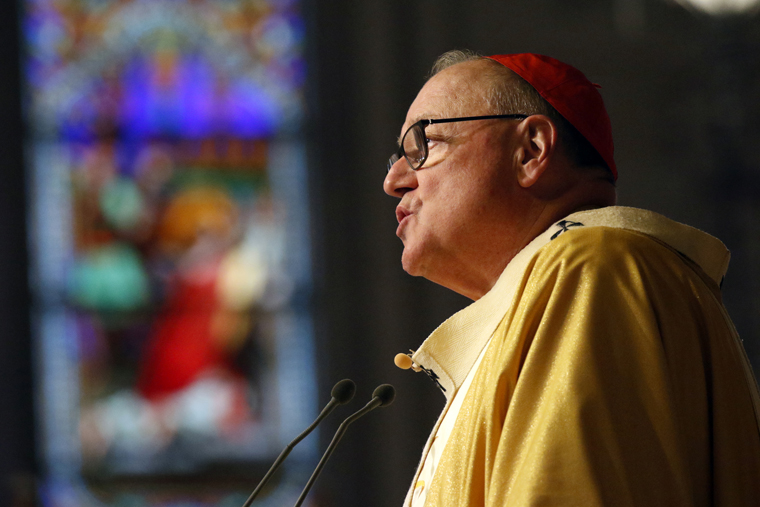 This is one of a series of pastoral and personal reflections on living in this time of pandemic. It was written by Cardinal Timothy M. Dolan of New York as his weekly column published April 2 in Catholic New York, the archdiocesan newspaper, with the headline “The Resurrection of Easter Is unstoppable.” This is part of an occasional series of reflections CNS will have from some U.S. Catholic bishops.

It’s a tough time, my good people, a “built-in” Holy Week, as all of us are close to Jesus in his hour of agony and death on the cross.
Those suffering from the virus have a share in our Lord’s passion, as do their families so worried. Our courageous and indefatigable health care providers sense the discouragement and weariness of our Savior carrying his cross. All of us, apprehensive about the future, reminded of our vulnerability, cloistered from family, friends, neighbors and parishes, missing Mass and the sacraments a lot, are making our own stations of the cross.

Yet, on the way, like that first Good Friday in Jerusalem, we meet heroes. Think of Veronica, who soothed the bruised, bleeding face of Jesus; now imagine those caregivers easing a patient with fever, coughing, aches and pains, a sore throat, who worries about it getting worse.

Now consider Simon of Cyrene, who helped an exhausted Jesus carry his cross up the rocky hill to Calvary; now focus on essential workers — police officers, firefighters, rescue workers, EMTs, chaplains, sanitation workers, grocery and food delivery folks, our utility personnel — who take a risk these days staying on duty to help us all get through this.

Now recall Mary, His sorrowful mother; St. John, His beloved disciple; and the other holy women, keeping the dying Jesus company, consoling and encouraging Him; now switch to our parents, family members, teachers, volunteers and neighbors, checking in on the fragile and elderly, leaving meals on porches, getting medicine when they need it.

And what about the centurion, so moved by the sacrifice, love, patience and mercy of this prisoner on the cross, who was led to confess, “Truly, this man was the Son of God!”; and now zero in on those recovering a sense of faith, a trust in prayer, a turning to God that may have gone dormant, now revived by these troubles.

Yes, as a Gospel during Holy Week somberly starts, “It was dark.”

True, there is indeed darkness out there, as there was that afternoon of a Friday weirdly called “good” when the sun hid and the earth trembled.

Bring on Easter! Pardon the misquote of the song from “Mame,” but “we need a little Easter, right this very moment!”

It will be a unique one for sure: We won’t be able to dress in our finest and go to Mass; no big family dinners with ham or lamb; no visiting with aunts, uncles and grandparents.

Ah, but there’s no eclipsing the triumph of Easter. “He is risen as He said.”

“The strife is o’er, the battle done/Now is the Victor’s triumph won.”

No darkness is more pervasive than His light; no struggle is lost with Him as our victor; no death is permanent with Him as our life.
April 1 was the 43rd anniversary of my dad’s sudden death at 51.

Rarely did he speak of his years in the Navy during World War II. He sure had the right to do so, as he was in the midst of the harrowing battles in the Pacific. Yes, he was there at Iwo Jima, Guadalcanal, Midway, Manila.

One paschal holiday when I was a boy he did speak of Easter Sunday in April 1945. On the USS Cleveland, his ship, there were wounded Marines. Among his fellow sailors there was trepidation galore as they kept lookout for kamikaze planes, and heard the news that fierce battles, maybe even an invasion of Japan, were ahead.

Yet, he told us, victory was in the air! They realized the “good guys” had the upper hand, that by next Easter they might be home, that their sacrifices were hardly wasted.

It was his most memorable Easter, Dad commented, and he would never forget the Filipino priest who came aboard for early morning Mass, who moved them all by thanking them for coming to the assistance of his homeland, and commented simply, “Good Friday is fading; Easter always wins!”

Seems this Holy Week that we’re all locked for a while in a Holy Saturday posture; we trust the worst of Good Friday is over, and we are confident that the Resurrection of Easter is unstoppable.