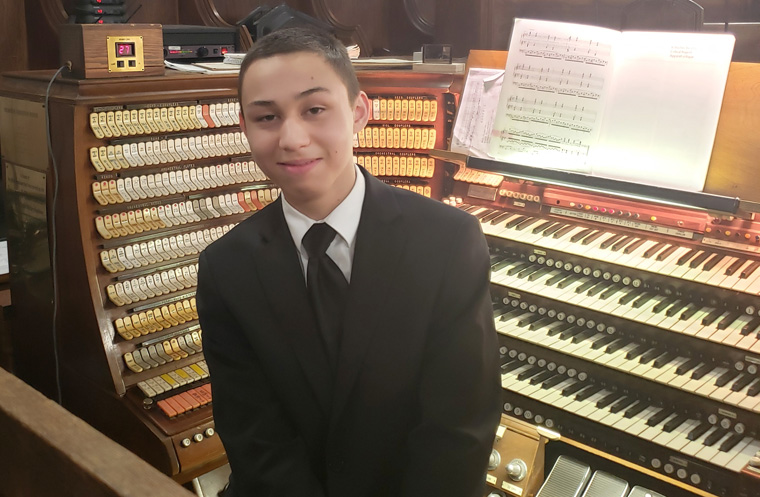 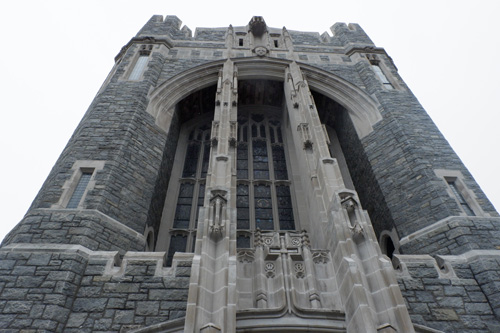 He performs on the Cadet Chapel’s organ, which has 23,511 pipes

Dominic Fiacco, a 14-year-old, may come from a small rural village in the Mohawk Valley, but thanks to his musical talent, which he and his teachers have worked hard to develop, he has received many great opportunities to play the organ in lots of places, sometimes far from his original little town. Most recently, he was able to play a concert in the Cadet Chapel at the United States Military Academy at West Point.

Craig Williams, organist and choirmaster at the Cadet Chapel, heard about Dominic and his remarkable talent, and contacted his teacher, Stephen Best. Then, a concert at the chapel with Dominic was arranged. And so, on a rainy Sunday morning at the end of March, a busload of people went down to West Point to hear Dominic play.

Everyone on the bus said they were very excited to see Dominic perform. Dominic, who lives in the village of Poland in Herkimer County, plays the organ at Masses at St. Joseph–St. Patrick Church and also at other Central New York churches. 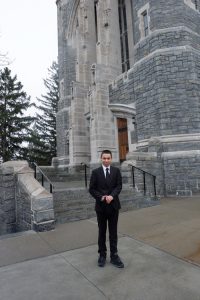 On the way down, the bus went through the Catskill Mountains. All around us there were rocky hills with mist from the rain wrapped around them. It gave a dramatic effect. To me it seemed like a setting from a J.R.R. Tolkien book, like a scene from a fantasy adventure. I wondered if this setting was fitting for our trip, and decided we were on an adventure, the goal of which was to see a brilliant concert of Dominic’s. Doubtless, though, it was a journey that was merely part of a larger journey, the journey of Dominic and his amazing career.

When the bus got to West Point, the passengers, or “adventurers,” went to look at the West Point visitor’s center and the West Point museum. They got to see the long and impressive history of the place. One person from the bus, Ellen Benton, said it was “spectacular” for Dominic to play there “at his age,” “because of its significance.” West Point is indeed the “oldest operating active duty garrison in the United States.” President Thomas Jefferson, the second president of the United States, had the Academy established at West Point. There had already been a fort there instituted by George Washington, at a strategic high position overlooking the Hudson River at the entrance to America, where Henry Hudson had sailed through. Over the years, famous people have attended the West Point Academy, such as Ulysses S. Grant, Robert E. Lee, George Patton, Douglas MacArthur, Dwight D. Eisenhower, and Buzz Aldrin. With such a long history that is integrated with the history of our country, it was truly an honor for Dominic to play there and for everyone to see him.

Andrew Siuta, organist, liturgical coordinator, and music director at St. Joseph–St. Patrick’s Church in Utica, looked on the musical side of things. He said he was “excited to see the variations Dominic makes (on his pieces) for the organ.” Yes, the Cadet Chapel’s organ, which has 23,511 pipes and is the largest organ in a place of worship in the world, would undoubtedly bring Dominic’s pieces out in a grand way.

After touring for some time, the “adventurers” went to the Cadet Chapel to see, or should I say hear, Dominic. The chapel was a large, beautiful stone building which was dedicated in 1910 after four years of construction. It stood on a hill, where you could see nearly all of the academy’s grounds. The view was magnificent. The interior of the chapel was just as magnificent and provided something beautiful to look at while you listened to Dominic’s beautiful music. 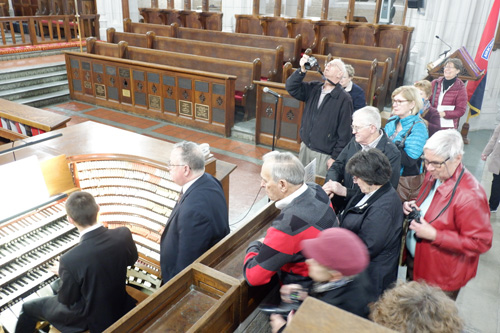 Dominic practicing the organ with Craig Williams, surrounded by the “adventurers.” (Photo Courtesy | By Philip Fiacco)

The people didn’t need to wait long to start listening and gazing—Dominic began the concert with the “Fugue on the Choral Ad Nos, Ad Salutarem Undam” by Franz Liszt. It sounded like a mighty storm and began with the promise that darker and mightier things would come later in the piece, and indeed they did. Despite this, the piece managed to sound calm and soothing at times.

Next, Dominic played the “Prelude in E-flat Major, BWV 552” by Johann Sebastian Bach. It began pleasantly, yet sounded heroic, and then it became a great journey—an adventure of a hero, which ended triumphantly. Perhaps it was the adventure of the hero from the fantasy adventure that the Catskills had brought to mind. Dominic then played “Heart of Peace” by Norwegian composer Mons Leidvin Takle. This piece, which was composed for Dominic’s teacher Stephen Best, was the favorite of the people attending the concert. It was hard not to love it, for the piece was always calm and soothing, so much so, it was overflowing with peacefulness. Perhaps this was a continuation of the previous piece and was the happy and quiet rest of the hero, who could be in peace when his journeys and adventures were over.

The piece Dominic played next was the last movement of “Sonata Number 1 in F Minor, Op. 65, Number 1” by Felix Mendelssohn. The flow of the piece was like the flow of a great river. It grandly roared along and sang, with rises and falls and cascades. While listening to it, you let the great sound of the organ envelope you, and it was not hard to imagine that you were in the midst of a river with the sound and feel of it all around.

After that Dominic played the “Final from Symphony Number 5 in A minor” by Louis Vierne. It was like a person’s life: perhaps a life from a story, but amidst adventures and journeys and heroes and fantasy; that was fitting. The piece began cheerfully and pleasantly, going along; it then developed into what was serious and shrouded in mystery—sad, moody and dark; but then it moved on from the melancholy mood and entered into its triumphal ending. Finally, Dominic played “Festmusikk,” also by Mons Leidvin Takle, as a surprise piece. The piece has been a favorite among Dominic’s followers, and was very fun to listen to. It zoomed along, like a roller coaster, and sounded like a carnival or maybe a merry-go-round, but a sped-up merry-go-round at that. Dominic’s concert then ended with a standing ovation. 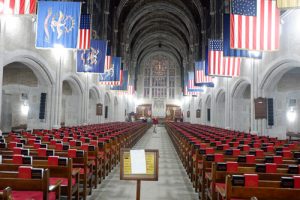 After the concert, the only words people could find to describe it were ones like “magnificent,” “powerful,” “amazing,” “fantastic,” or as someone said, “more than fantastic.” Jane Malin, who coordinated the bus trip along with Dominic’s grandmother, Dianne, said that the experience “was a chance of a lifetime, and we will not soon forget those sights and sounds.”

Another person, Laura Moody, was touched by the concert and said she could “see that music is a universal language.” Craig Williams said the organ “brought everything out well.” So those who were excited to see how the organ would bring the pieces out must have been pleased.

Another thing that Craig Williams said was worth noting: “It really is a great pleasure to be able not only to offer a world-class organ, but to offer world-class organists. … Dominic Fiacco [is] really already beginning to ascend to world-class status at the age of fourteen.” After hearing him play, everyone could see that Dominic was becoming a greater and greater organist, and as his talent increased, the opportunities open to him would also become greater. They all agreed that he was “beginning to ascend to world-class status.”

And so, when we got on the bus and went home, the thought was with us: “We reached the goal of our journey, and now we’re going home. The concert is over, and the journey, the adventure. Another great moment in Dominic’s career is over. Time for the next one!”

Philip Fiacco is Dominic’s brother. He is in the seventh grade. This is his first feature article.