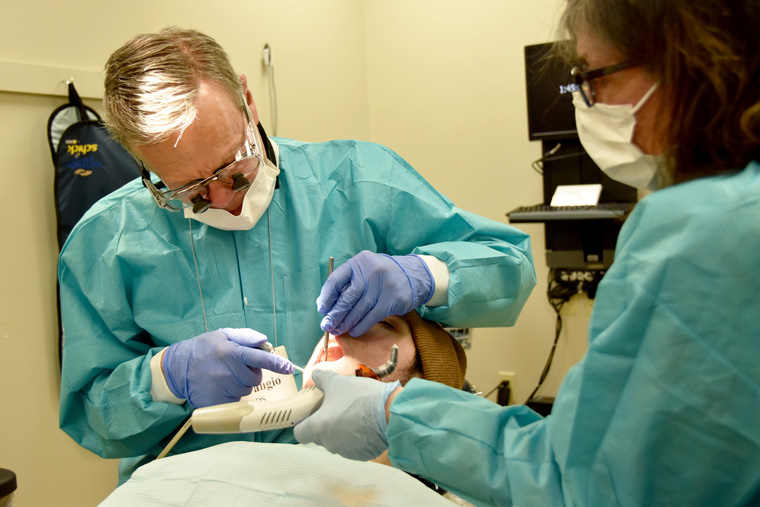 The toothache story was a real cruncher. 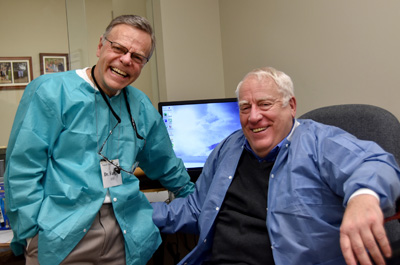 Dr. Robert Fangio, left, and Dr. David Dasher pause for a moment at Amaus Dental Services. “I’m very blessed because Dr. Dasher is going to stay and do a lot of work here in the clinic,” Dr. Fangio says, “which gives me the opportunity to spend the hours I need to spend across the street” in the chancery. Dr. Fangio will also continue volunteering at Amaus.

A woman called Amaus Dental Services to report that her husband was in such pain that he couldn’t even talk on the phone.

Amaus offers free dentistry to those in need, but it does not handle emergencies; appointments must be scheduled in advance. So the sufferer might have to visit an emergency room for medication.

“Then somebody called about three minutes later and said they weren’t going to be able to make” their appointment, recalled Tom Mueller, one of the Amaus administrators.

Mueller went to Dr. Robert Fangio and said: “‘Can we get this guy in? He’s in a lot of pain.’

“I called the woman back. I said: ‘Bring your husband in.’

“‘We just had a cancellation.’

The story is classic Dr. Fangio, a deacon who on Jan. 6 became the Director of Deacon Personnel for the Office of the Permanent Diaconate. Deacon Dr. Fangio had worked as Assistant Director in the office with Deacon Greg Cross who served as Director and has since moved to North Carolina. 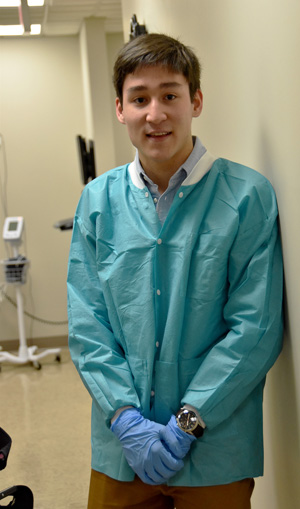 Joe Riccardi, a pre-dental undergraduate at the University at Buffalo, volunteers at Amaus Dental Services. Of Dr. Robert Fangio, he says: “Whenever I’m assisting with him he always goes out of his way to help me and teach me everything he knows about dentistry and how to care for the patients.”

Dr. Fangio earned his dental degree in 1983 and retired after more than 30 years in private practice. He was ordained a deacon in 2014. Always wanting to be of “service to God’s people,” he joined Amaus in February 2015.

Amaus had opened in August 2014 to serve — for free — people who are uninsured, homeless, or unemployed. A ministry of Cathedral of the Immaculate Conception Parish, the dental clinic expanded from a small space to a well-appointed suite in the Curley Building at 259 E. Onondaga St. (315-802-6741) near the cathedral. None of the Amaus workers are paid.

“At Amaus Dental, we try to serve all people and try to meet all their needs in a compassionate way — that’s the way Bob Fangio leads his life …, as a dentist, as a deacon, as a human being,” said Dr. David Dasher, the dental director at the clinic. “So he epitomizes what we do here at Amaus Dental. He’ll do a great job” as Director of Deacon Personnel.

“No one should be isolated,” Deacon Dr. Fangio said on a recent busy day at Amaus, where Administrator Mueller’s appointments phone was ringing with its brash ting-a-ling and three providers — Dr. Fangio, Dr. Dasher, and Dental Hygienist Marry Ellen Holgate — were working on patients amid the ever-present hissing of the suction instrument.

“You carry your vocation, you carry your diaconate to wherever you go,” Dr. Fangio said, so he doesn’t see his volunteer dental work “as having a different hat on.”

“Ordained to the charism of service,” Deacon Fangio also fills many roles at Holy Family Church in Fairmount, including preaching, working with senior citizens, working at funerals and wakes, and preparing couples for weddings. “From the day you are ordained to the day you die, you are a deacon,” he said.

The diocese has about 70 active deacons; 11 more, “with the grace of God,” will be ordained in April. There are a number of on-leave and retired deacons, and some of the retired ones still have some ministry.

Deacon John Falge, of St. Francis Xavier Church in Marcellus, said in an email: “Dc. Bob Fangio is my friend, was my dentist, my classmate, and go-to guy for advice and guidance. He is truly a blessing to our Deacon community and to the people of God. He is kind, thoughtful and truly cares about people. A great pick by the Bishop to lead our band of Brothers.”

Deacon Philip Slominski, OFS, of Assumption of the Blessed Virgin Mary Church in Syracuse, emailed: “I believe Deacon Bob is an outstanding choice for the position of Director of Deacon Personnel. He is personable, approachable, and thorough. The time he spent working alongside Deacon Greg should make for a seamless transition. I pray for his success as he begins this new chapter in his service to the Diocese of Syracuse.”

‘Immersed in the world’

In the Office of the Permanent Diaconate in the chancery, Deacon Fangio serves as the person who speaks to the deacons sometimes on behalf of Bishop Douglas J. Lucia. Deacon Fangio’s office sometimes works with deacons who many have a particular issue going on in their ministry; plans retreats for deacons and meetings with the bishop; helps with ordinations or other special Masses; and oversees annual reports that the deacons send in.

Also, he is involved in the application process for the deacon-formation program, and he teaches homiletics along with an assistant.

“Deacons are kind of immersed in the world,” the homilist Dr. Fangio said, “and we can bring those life experiences to the pulpit.”

“He sincerely cared about what he was doing,” she said, “he was very excited about his work. You could tell it wasn’t a job to him. … That’s what encouraged me to come and volunteer here.”

This was her first day volunteering at Amaus. With a green marker, she wrote on an eraser board the upcoming days when she can work. When she was done there was plenty of green on the board; there was blue writing too — the dentists who volunteer.

“Worth her weight in gold,” Dr. Dasher said of Hygienist Holgate. He added: “We only have the best people here.”

The all-volunteer staff includes Cindy Johnson, Dr. Fangio’s dental assistant — “been with me every day since I’ve been here, twice a week …, totally out of the goodness of her heart; no reimbursement other than just the opportunity to work and to serve others.”

One of their patients this day was Brandon Irving, 19, of Auburn, who was getting a filling. He explained that his family’s business, making countertops, is not at the point yet where it can afford its own insurance.

So far so good

What is more critical than taking care of a bad tooth?

“Nothing,” the patient said. “It’s the worst pain in the world.”

“OK? So far so good?” Dr. Fangio asked Irving after filling his tooth.

In addition to fillings, Amaus offers free X-rays, cleanings, and extractions. Irving previously had four teeth extracted there. “You go anywhere else, an extraction can cost a grand,” he said.

He added: “Everyone’s volunteering, so they care more about the people, not the paycheck.”

“People like Brandon are incredibly grateful for what we do,” Dr. Fangio said. “They are a pleasure to work with.”

No rush to numbness

Another volunteer on this day was Joe Riccardi, a sophomore pre-dental undergraduate at the University at Buffalo. He has assisted Dr. Fangio a few times: “He’s a great guy. He’s just great with all his patients. He’s really gentle.

“One thing that really stood out to me is when he anesthetizes the patient [with an injection]. … It takes him a long time because he goes slowly, and he cares about his patients not to inflict any pain. … I definitely learn a ton from assisting with Dr. Fangio.”

Regarding the suffering man whom Dr. Fangio saved because of the last-minute cancellation, Mueller offered this epilogue:

Mueller approached the patient and said: “‘Hey, how you doin’?

“He had tears in his eyes. He said: ‘I can’t wait to get home and play with my kids.’

“He said: ‘I’ve been in such pain that I’ve been deliberately staying away from my children, ’cause I know I’d be mean to them because it hurt so much. I’m so thankful. I’m so grateful.”

“If I remember correctly,” Dr. Fangio said, “it was somebody who, in a situation when they’re in pain, you don’t think straight, your emotions are high. You sometimes aren’t rational and you can get really desperate.

“You can get angry and you can go through all those gamut of emotions; and so, again, it’s treating not only the physical problem,