Endicott parishes create a bond with students in Uganda 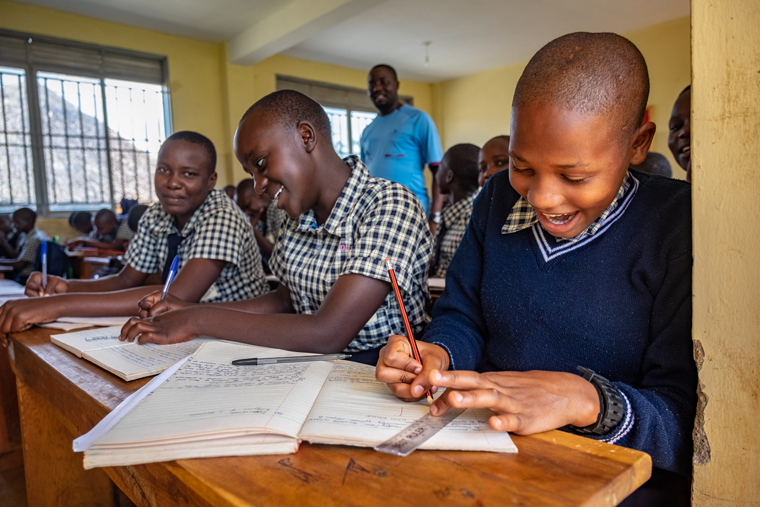 The students at what would become St. Francis De Sales Secondary School in Iyolwa, Uganda, gathered beneath a tree for lessons while their school was being built. Today, however, the Catholic school, along with nearby Christ the King Primary, is a thriving, modern facility that serves more than 500 students.

Parishioners at the linked Endicott parishes of Our Lady of Good Counsel (OLGC) and St. Ambrose, where Father Michael Galuppi is pastor, support 49 girls at the schools with twice-a-year donations. Father Galuppi visited the schools in early June.

Traveling with OLGC parishioner and retired photojournalist Chuck Haupt, Father Galuppi spent nine days in Uganda, a few of them touring with Father Charles Opondo-Owora, pastor of St. James Church in Johnson City, who was visiting family in his native country. The two priests also concelebrated Mass at the annual Pilgrims Day and Martyrs Day Masses, events that attract hundreds of thousands of people to the country’s Shrine of the Holy Martyrs. (Read more about the celebrations at thecatholicsun.com.)

Then it was on to Iyolwa, in an area Father Galuppi described as remote. But that’s precisely why the Missionary Society of St. Francis De Sales, also known as the Fransalians, chose to build their first school in Uganda there as part of a new parish in the Tororo Diocese. The parish church, still under construction, is near the primary school. The secondary school is a mile or so away.

A legacy of service to the poor

The Missionaries of St. Francis De Sales were founded in France in 1838 and spread to India and Africa. The founding director of the schools in Iyolwa, Father Thomas Varghese, is a Fransalian from India, as is the current director, Father Robert Raj.

Officially opened in 2017, the co-ed schools are already expanding: Another floor is being added to the secondary building to house a fourth upper-grade class. Come next year the schools’ total enrollment is expected to grow to around 700, Father Galuppi said.

Elementary students go home at the end of the school day, but secondary students live at their school. Father Galuppi described the students at both schools as cheerful and welcoming.

He was especially impressed with the way the schools stretch their resources. They use solar power and mill their own grain. They collect rainwater and filter it through a system built by German volunteers. They raise animals for food (the students are served meat once a month). The cattle they raise also keep the grass in the athletic fields short.

Secondary students interested in agriculture maintain a garden and sell the vegetables they grow back to the school. The money the school pays for the produce is then donated to a cause the students have chosen.

“They give the money to people needier than them,” Father Galuppi said. “They’re not just receiving, they’re giving.”

The secondary students also have regular chores, such as cleaning their dorms and classrooms. They do their own laundry, too.

“They have a positive ethic,” Father Galuppi said. “These are happy, normal kids.”

When Father Galuppi asked the school’s director, Father Raj, about discipline at the school, he said the “sentence” for a first offense is having to clean the latrines for a week.

OLGC and St. Ambrose parishioners support 38 girls in the primary school in Iyolwa and 11 in the secondary. The roots of the connection between the schools and the parishes can be traced to the desire of one OLGC parishioner, Diane Donahue of Apalachin, to make a difference.

Haunted by a documentary she’d watched on sex trafficking in Vietnam — and encouraged by her husband, Bill, and Deacon Tom Harley at OLGC — Donahue started the parish’s Women’s Empowerment group. She wanted the group to assist a place with low overhead so that the money parishioners donated would go directly to those in need.

She heard from Sister Mary Jane Athieno, LSOSF, now a pastoral care associate at St. Patrick’s Church in Binghamton, that the Fransalians were starting a mission in Iyolwa, Uganda, close to where Sister Athieno grew up.

After that, “Things just seemed to fall into place,” Donahue said. “The Holy Spirit had a hand in it.”

Life in Uganda can be hard, Donahue said, especially for girls, many of whom may experience their first pregnancy in their teens. At St. Francis De Sales, she said, nearly a third of the students are orphans.

The support of OLGC and St. Ambrose parishioners over the past four years has made a significant difference in the lives of “our girls” in Iyolwa, Donahue said. Girls can stay at the school until age 19, giving them, as Father Galuppi put it, “a big step up.”

“They’re safe there,” he said. “They’re sheltered from society.”

“It’s nice to talk to a teen who doesn’t have a cell phone,” Father Galuppi added.

The two schools operate on a trimester system, so breaks last just a few weeks. That means less time for students to lose focus on their education.

And focus is a big theme at the schools. Inspirational signs can be found throughout both of them and on school grounds, Father Galuppi said. Essays written by students for the secondary school’s annual magazine, “The Transformer,” emphasize the need for focus and the benefits of hard work and a positive attitude.

Another big theme at the schools is the need to nurture the whole person — intellectually, emotionally, physically, and spiritually. Students are encouraged to see themselves as potential leaders of their nation.

Father Galuppi said the Catholic Church is alive and well in Uganda. In fact, the Fransalians hope to build a seminary there and in two other African nations in the years ahead.

Liturgies are “alive,” too — replete with music, drumming, and dancing, Father Galuppi said.

He noted that parishioners at the church in Iyolwa always recite the Prayer of St. Francis after Communion. It reminded him of something Pope Francis said not long ago about the true nature of Christian charity: That it’s about encountering Christ in the poor and needy, face to face, and not merely handing out aid to soothe one’s conscience.

Donahue, whose 180 hand-made bracelets Father Galuppi delivered to the girls in Iyolwa, echoed this sentiment.

“I didn’t want us to just write a check,” she said.

Parishioners at OLGC and St. Ambrose see the faces of the girls they support in Uganda in quarterly bulletin inserts from Women’s Empowerment and hear about the progress they’re making at school. The schools’ director makes frequent reports to the parish as well.

And now they have the stories Father Galuppi can share about the time he spent getting to know the girls and their schools.

“It’s nice to have a relationship,” he said, “to see with your own eyes.”

Mary Haupt is a former newspaper reporter and editor who teaches journalism at Binghamton University. She is married to retired photojournalist Chuck Haupt.

Three secondary school students who are supported by Our Lady of Good Counsel and St. Ambrose parishes in Endicott share a laugh as they talk about the future.

Her chores done for the day, one secondary school student celebrates.

A school administrator gives instructions to the student body as they head out to do chores after a day of classes.

Father Michael Galuppi is draped in brilliantly colored fabric, a gesture of welcome, by one of the primary school students.

A student, in her school uniform, outside the primary school in Iyolwa.