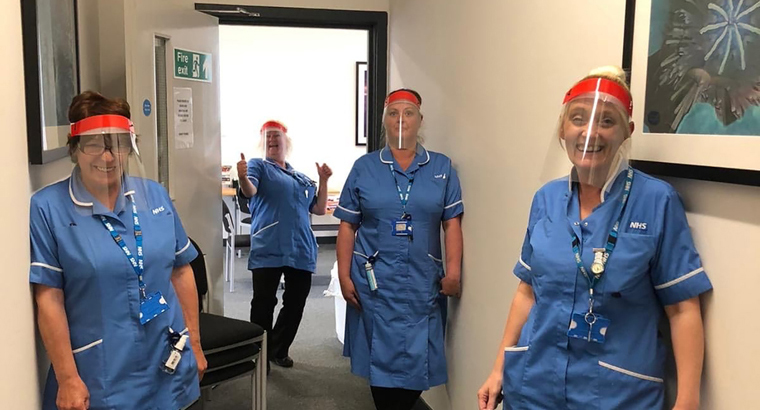 MANCHESTER, England (CNS) — Staff and students of a Catholic secondary school are making thousands of visors to equip front-line health service staff in the battle against the coronavirus.

With more than 30,000 deaths from COVID-19, Britain has the highest mortality rate in Europe from the global pandemic. At the same time, it is facing huge shortages of personal protective equipment such as masks, gowns, gloves and visors.

So St. Mary’s Catholic College in Wallasey, on the Wirral peninsula of northwest England, has turned some of its classrooms into workshops to make visors for the National Health Service.

So far, it has produced more than 2,300 visors, which entirely cover the face and neck, for medical staff in two local hospitals and for the Royal Liverpool Hospital. It also has sent visors to staff in care homes across the region.

The school closed as part of the seven-week national lockdown, except for a small number of students whose parents are key workers. Vanessa Morris, a design technology teacher, asked headteacher Tony Boyle if they could use their time to make the protective gear.

“I wondered initially whether there would be much demand, but soon news got out and we have been inundated with requests from doctors’ surgeries, the local walk-in center and nursing homes, and we’ve been able to respond. I’ve had lovely letters and emails of thanks from them,” Boyle told Catholic News Service May 7.

“We’ve also managed to involve some of the key workers’ children, who are still attending, which is particularly fitting,” he added.

At present, three members of staff and four students are working on the project, and they have received many offers of additional help from staff, local families and former students.

They received pledges of materials and money so they could step up production and when they ran short of cable ties, the local community raised enough cash to pay for a consignment of 2,000 of them.

Among the donations was a gift of clear plastic to make the visors to the correct medical grade by a company in Wales.

As they increased their output, Wirral Borough Council, the local authority, took on the role of coordinating the distribution of the visors in hospitals and care homes and agreed to pay for the materials to make the visors.